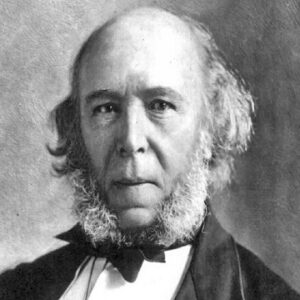 Herbert Spencer was a prominent philosopher, sociologist, biologist, anthropologist, and political theorist who was a key role in the nineteenth-century English intellectual revolution. He was born to a nonconformist father and was schooled in mathematics and physics at home, first by his father and subsequently by his uncle. Later in life, he accumulated his extensive knowledge through personal reading as well as interactions with acquaintances. He was an early proponent of evolution theory, coining the slogan “Survival of the Fittest.” He felt that the principles of evolution, such as natural selection theory, apply equally to human societies as they do to individuals and other biological species. He also argued that the individual should take precedence over society and science should take precedence over religion. Individualism, on the other hand, he argued, would emerge only after a socialist era and consequent war. Despite being a liberal himself, he believed that in the coming days liberalism will give rise to a new type of despotism far worse than any previous despot.

Herbert Spencer was born on April 27, 1820, in Derby, a small English Midlands town. His father, William George Spencer, was a teacher who worked as a schoolmaster and subsequently as a private tutor, teaching astronomy, physics, and other mathematical disciplines. He was raised as a Methodist but eventually converted to Quakerism.
Herbert Spencer was the eldest of nine children born to George Spencer and his wife Harriet. He was also the only child who lived to adulthood. He was never sent to school because of his illness, instead studying at home with his father, who mostly taught him the empirical sciences.

Herbert was a bright kid when he was younger. He developed hostility to authority and an argumentative attitude as a result of his father’s individualistic, anti-establishment, and anti-clerical ideas. Simultaneously, he was receptive to new ideas and absorbed a great deal from chats.

He was transferred to live with his paternal uncle Reverend Thomas Spencer when he reached thirteen, where he studied physics and mathematics. Traditional courses such as history and classics were mostly ignored, though his uncle taught him the fundamentals of Latin, which enabled him to translate simple texts.

During this time, he was heavily affected by his uncle’s Benthamite beliefs. He believed that the goal should be to achieve the most happiness for the largest number of people.

After that, Reverend Spencer promised to send him to Cambridge to study. Herbert, on the other hand, did not believe he was qualified for the position. Instead, he went to a school to teach, but after a few months, he left to work for a railroad firm.

Job on the Railroad

Herbert Spencer, being seventeen years old, began working for the London and Birmingham Railway Company in 1837. During this time, he began self-teaching civil engineering and working as an engineer. At the same time, he began writing letters to nonconformist publications such as ‘The Nonconformist,’ ‘The Zoist,’ and ‘The Pilot.’

Spencer discovered a few fragments of fossils while working on the railway track one day. It piqued his interest in paleontology and geology. To understand more about the subject, he purchased a book of Charles Lyell’s ‘Principles of Geology’ and began reading it.

Long ago, when living in Derby, he was introduced to Erasmus Darwin’s and Jean-Baptiste Lamarck’s concept of biological evolution, which maintained that humans developed from lower animals. Lyell, on the other hand, had devoted an entire chapter to debunking Lamarck’s idea. Spencer was taken aback.

Working as a Subeditor

Herbert Spencer quit the railroad job in 1848 to work as a subeditor for ‘The Economist,’ which he kept until 1853. In the meantime, John Chapman published his first book, ‘Social Statics, or The Conditions Essential to Happiness Specified, and the First of them Developed,’ in 1851.

In 1851, he was also invited to study B. Carpenter’s ‘Principles of Physiology.’ He came upon von Baer’s formula while reading the book, which demonstrated how every plant and animal developed from a homogenous existence to a more heterogeneous one. It left a lasting impression on him.

Spencer’s classic essay ‘The Developmental Hypothesis’ was published in ‘Leader’ in 1852. He clarified his concept of organic evolution in it, and he continued to work in that area for a few more years after that.

A Career in Literature

Herbert Spencer obtained his uncle’s estate in 1853 and became financially self-sufficient. As a result, he quit his employment to dedicate more time to his academic interests. He wrote a series of writings on education from 1854 to 1859, which were later gathered in a book.

The first part of Spencer’s ‘The Principles of Psychology’ was released in 1855. He attempted to prove that the human mind was subject to natural law, which was inherent in human nature and could be discovered within the framework of human biology, through this study.

Another of his important works was the article ‘Progress: Its Law and Cause,’ which was published in 1857. He aimed to prove that everything in nature moves from simple to complex by extending the concept of evolution not only to human civilization, but also to the animal and physical world.

Spencer was given a fresh direction when Charles Darwin’s ‘Origin of Species’ was published in 1859. He hadn’t considered the process of natural selection to account for organic evolution despite researching on the issue for numerous years.

Spencer began to expound on Darwin’s concept of natural selection, although being a little disappointed that he had not thought of it previously. At the same time, he continued to concentrate on other subjects, and in 1861, he released ‘Education: Intellectual, Moral, and Physical,’ a collection of his articles on education.

He also began work on his most complete work, ‘The Synthetic Philosophy,’ at this time. In 1862, the first volume, named ‘First Principles,’ was released. He went into great detail about the principles of evolution in it.
In 1864, the second volume, named ‘Principles of Biology,’ was released. He discussed his concept of ‘Survival of the Fittest’ in this work, a term that was later used by Darwin himself. It was later used as a textbook at Oxford University.

By the end of the decade, Spencer had established himself as one of England’s most illustrious intellectuals and philosophers, and he was extensively read. His books were translated into a number of languages, and he was able to sustain himself completely via his writings.

His ‘Study of Sociology,’ published in 1873, was a huge hit in the United States and sparked a lot of interest in the subject. From 1873, he began producing a series of papers titled ‘Descriptive Sociology’ as the foundation for the third and final volume of ‘The Synthetic Philosophy,’ ‘The Principles of Sociology.’

Spencer began publishing ‘Descriptive Sociology’ separately in 1873, despite the fact that it was originally intended merely as a foundation for ‘The Principles of Sociology.’ Due to a shortage of funding, the project had to be abandoned in 1881 after eight volumes were published; yet, he never gave up. In his will, he stipulated that it be completed after his death.

His final significant work, ‘The Principles of Sociology,’ was published in 1896. He continued to work after that until his death in 1903, focusing on sensitive subjects. When he was unable to write any longer, he began dictating.

Herbert Spencer’s most renowned work, ‘The Man Versus the State,’ was released in 1884. It was made up of several essays that appeared in ‘The Contemporary Review.’ ‘The New Toryism,’ ‘The Coming Slavery,’ ‘The Sins of Legislators,’ and ‘The Great Political Superstition’ are the four main chapters of the book.

Spencer foresee corruption spreading into liberal philosophy in this book. He feared that the same liberalism that had emancipated the world from slavery and feudalism would one day produce new despots far worse than the old.

Herbert Spencer was nominated for the Nobel Prize for Literature in 1902, right before his death.

Herbert Spencer never married. Despite rumors that he had a romantic interest in Mary Ann Evans (George Elliot), he rejected it in his autobiography, which was released after his death in 1904.

He had never been in good health since he was a child. He suffered hypochondria in 1855, a mental disease that he carried with him for the rest of his life. He was always complaining about pain and illness.

He had spent the last ten years of his life alone. His readership began to dwindle as many of his pals died. His caustic criticism of the Second Boer War, which he had always opposed, added to his unpopularity.

Herbert Spencer died on December 8, 1903, as a result of ill health. He was 83 years old at the time. His ashes are placed alongside Karl Marx’s grave in London’s Highgate Cemetery.

Many famous philosophers have been impacted by his efforts over the decades. Charles Darwin, Henry Sidgwick, William Graham Sumner, Murray Rothbard, Émile Durkheim, Henri Bergson, Charles Sanders Peirce, Auberon Herbert, Yan Fu, and Jack London were among those who attended.
The slogan he coined in 1864, “Survival of the Fittest,” continues to fascinate scholars around the world.

Spencer is likely the only philosopher in history whose works sold in the millions during his lifetime.