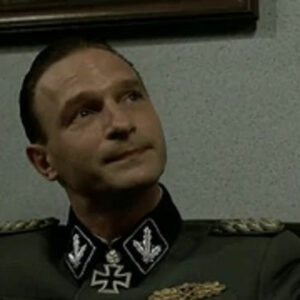 In Germany under Nazi domination, Hans Otto Georg Hermann Fegelein had a senior position in the Waffen-SS. He was one of Heinrich Himmler’s most dependable employees and ultimately served as both his colleague and the SS envoy to Adolf Hitler’s headquarters. He was a close friend of Hitler and married Gretl Braun, Eva Braun’s sister. Eight years after starting his military career in a cavalry regiment of the Reichswehr in 1925, Fegelein was moved to the SS. He was tasked with planning the equestrian competitions at the 1936 Berlin Olympics as the head of the SS equestrian unit. After the invasion of Poland in 1939, he was assigned to Warsaw to take command of the SS Totenkopf Reiterstandarte. Later, he was transferred to France, where he took part in the Battle of Belgium. In 1940, his regiment was moved back to the Eastern Front, where it caused the deaths of almost 17,000 civilians. In the early years, they had great success against the Red Army. Fegelein quickly advanced through the SS ranks while excessively exaggerating the successes of his unit. Himmler chose him to represent himself and his group to Hitler’s entourage in September 1943. He quickly won Hitler’s trust and worked within the Führerbunker during the final months of the war. He was ruthless, ambitious, cynical, and opportunistic. When it was revealed that Himmler had attempted to negotiate a peace settlement with the Allied Forces in 1945, suspicion also fell on Fegelein, and he was subsequently killed by gunfire.

On October 30, 1906, Hermann Fegelein was born in Ansbach, Kingdom of Bavaria, German Empire. Oberleutnant Hans Fegelein, a retired officer, was his father. Waldemar “Axel” Fegelein, another sibling, was also a Fegelein.

His father, who managed an equestrian school in Munich, instructed him in riding. He was exposed to Nazi ideology at a young age as well. When he was 19 or 20 years old, he met Christian Weber, one of the party’s founding members, who later assisted him in joining the Schutzstaffel (SS).

After two terms at Munich University, Fegelein left to begin a career in government service in 1925. He served in the Reiter-Regiment 17 for the subsequent two years (Cavalry Regiment 17). On April 20, 1927, he enlisted in the Bavarian State Police in Munich as an officer cadet.

He left the service in 1929. Although he claimed to have left for “family reasons” in the official records, the truth is that he was caught trying to steal exam answers from a superior’s office.

His father had founded the Reitinstitut Fegelein in 1926, which the SS later utilized as a meeting location after Fegelein became engaged in the National Socialism movement. He joined the SA and the Nazi Party in 1930, and on April 10, 1933, he was promoted to the SS. He was the head of the SS-Reitersturm, the equestrian wing of the SS, and a teacher at the Reitinstitut Fegelein at the start of his term.

Fegelein took over running the institution from his father in the middle of the 1930s. He was swiftly promoted during this time, first to the Allgemeine-SS level of SS-Untersturmführer, then on April 20, 1934, to SS-Obersturmführer, and finally on November 9, 1934, to SS-Hauptsturmführer.

He also tried out unsuccessfully for the German equestrian team, losing to the Kavallerieschule Hannover, who went on to win the competition. He also organized the courses and facilities for the equestrian events at the Berlin Olympic Games. He was promoted to the position of SS-Sturmbannführer on January 30, 1936.

Fegelein was assigned to lead the SS Totenkopf Reiterstandarte (Death’s-Head Horse Regiment) in Poland in September 1939. They supported the police in the Poznan district while working under the direction of the Ordnungspolizei (order police).

Soon after, Himmler changed the regiment’s name to “1. SS-Totenkopf-Reiterstandarte” (1st Death’s Head Cavalry Regiment) and increased its size from four to thirteen squadrons. Germans of local ethnicity who lived in the General Government and elsewhere were therefore recruited.

Fegelein and the majority of the other officers skipped officer training school entirely. So, at best, the training they could give to these new recruits was basic. However, it was demanding, and efficient, and contributed to the men’s strong sense of togetherness.

Fegenlein’s battalion and the Orpo executed hundreds of Polish intellectuals, nobles, and clergymen on Hitler’s direct orders in order to achieve the Germanization of the occupied Polish territory prior to its eventual annexation to the German Reich. Intelligenzaktion was the name given by the Nazis.

Fegelein oversaw the “1. Standarte,” one of the unit’s two regiments, in December 1939. They were severely short on supplies of food, armor, and clothing. The men’s health rapidly worsened as morality reached its peak. Theft and corruption spread like wildfire.

He was accused of stealing cash and high-end goods, having an illicit relationship with a Polish woman who became pregnant (Fegelein forced her to have an abortion), and ordering arrests and executions in the Gestapo prison in Warsaw. This was the first time Himmler spared his protégé from an impending court-martial.

In the Kammienna-Konsky-Kielce region, his battalion fought against roughly 100 ex-Polish soldiers in March and April 1940. Before the other soldiers could flee, they were able to kill half of the soldiers. His squad was part of the massacre of 250 Polish civilians on April 8. Fegelein described his men’s conduct as “clean and decent” in his report, although there were many instances of murder and looting that occurred without any specific orders to do so.

He received a promotion to SS-Obersturmbannführer of the Reserves in the Waffen-SS on March 1st, 1940. He participated in the Battle of Belgium in France as a member of the SS-Verfügungstruppe. His regiment was given the new name 1st SS Cavalry Regiment in March 1941.

On June 22, 1941, Operation Barbarossa, often known as the German invasion of the Soviet Union, began. Fegelein, who was assigned to the 87th Infantry Division, battled to fill a gap in the 9th Army’s defenses close to Bialystok. The inefficiency of cavalry in contemporary warfare was conclusively demonstrated during the Second World War.

The initial units were given the order to cross the Narew river close to Wizna and engage the Red Army regiments positioned there, but they were unable to do so and were ultimately dragged back.

After the collapse of the Osowiec Fortress in late June, Fegelein’s cavalry was sent to conduct a reconnaissance expedition. In his report, he exaggerated the accomplishments of his battalion and boasted that they were prepared for a fight. He received the Iron Cross 1st Class, while twelve of his subordinates were given the Iron Cross 2nd Class.

His squad started working under HSSPF Erich von dem Bach-Zelewski in July 1941. Their mission was to thoroughly remove all Jewish, partisan, and civilian presence from the Pripyat Swamps. Himmler, who had originally assigned the squad to this mission, gave general instructions to kill collaborators and partisans who were Jews while sending Jewish women and children away.

Fegelein gave his soldiers orders to kill all Jewish males save for doctors and leather workers, catch enemy combatants wearing uniforms, and capture those who weren’t. He separated his men into two groups, and the two groups marched from east to west, reporting daily on their progress.

Fegelein received a letter from Himmler on August 1 criticizing him for what he perceived to be the brigade’s low death toll. Four days later, Himmler upgraded Fegelein to the brigade commander. All Jewish men over the age of 14 were slaughtered in accordance with Himmler’s military order number. 42.

All Jewish women and children were to be carried to the swamps and drowned, but because the water in the marsh wasn’t deep enough, they were also to be shot, according to the order. These Jewish settlements were some of the Holocaust’s initial casualties.

Early in October, Himmler halted a new court appearance for Fegelein. After initially arriving in Toropets, his battalion was transferred to Rogachev, where they engaged in guerrilla combat with the partisans. Fegelein’s report claimed that well than 3,000 Red Army soldiers were slain, although the majority of historians contest this assertion and come to the conclusion that many of those killed were unarmed civilians.

In the Battles of Rzhev in January 1942, the brigade effectively repelled an assault on the 206th Infantry Division’s rear region. He led his brigade in many fights at Chertolino after being promoted to SS-Standartenführer in February.

He served as the temporary commander of Kampfgruppe “Fegelein,” headquartered near the great bend of the Don, after the dissolution of the SS Cavalry Brigade in March 1942, and it was there that a Soviet sniper shot him. On April 20, 1943, he was appointed the SS Cavalry Division’s commander.

In January 1944, Himmler appointed him as his assistant and the SS delegate to Hitler’s headquarters. He witnessed the assassination attempt on Hitler on July 20, 1944, and the bomb blast left him with a superficial wound on his left leg.

Hitler, Himmler, and Martin Bormann served as witnesses at the June 3, 1944, wedding of Hermann Fegelein and Gretl Braun in Salzburg. He joined the union for political reasons because he thought it would help him develop his profession.

On January 16, 1945, Hermann Fegelein joined Hitler in the Führerbunker in Berlin. The Red Army was moving fast toward Berlin since the German infrastructure was in complete disarray. Fegelein quit his position in the Führerbunker after deciding he did not want to be a part of the suicide pact. He was severely inebriated when an RSD squad eventually located him and took him into custody.

Hitler discovered on the evening of April 28 through a BBC broadcast of a Reuters report that Himmler had approached the United States and England with a surrender offer via Count Bernadotte. This was treason in Hitler’s eyes.

He also thought that there was a connection between Fegelein’s disappearance and Himmler’s betrayal. He wanted to assign Fegelein to Kampfgruppe “Mohnke” at first, but instead, he ordered that Fegelein be stripped of all of his ranks.

He was discouraged by Otto Günsche and Bormann, who expressed their worry that Fegelein may flee once more. He was instead summoned to court martial. Conflicting accounts exist of what transpired afterward. Fegelein was still drunk when he was taken before the court, according to SS-Brigadeführer Wilhelm Mohnke, who presided over the court-martial. He had trouble standing up straight and had even urinated on the ground. Mohnke halted the process as a result. After that, he didn’t see Fegelein again.

The court ordered Fegelein’s execution, which was carried out that very night, according to the 1948–1949 Soviet NKVD dossier of Hitler compiled for Joseph Stain. Braun was eight months pregnant when he passed away. On May 5, 1945, their daughter Eva Barbara Fegelein was born.

The Olympic Games Decoration (1st Class) Fegelein won in the middle of the 1930s was his first military honor.
On December 15, 1939, he received the Second Class Iron Cross, then on June 28, 1941, the First Class version.

On November 1, 1943, he received the German Cross in Gold for his service as the SS-Brigadeführer and Generalmajor of the Waffen-SS in the SS-Kavallerie-Division.

On March 2, 1942, Fegelein received the Knight’s Cross for his leadership of the SS-Kavallerie-Brigade and as SS-Standartenführer. The swords were added on July 30, 1944, while Florian Geyer was serving as the SS-Gruppenführer, Generalleutnant of the Waffen-SS, and commander of the 8. SS-Freiwilligen-Kavallerie-Division.

The oak leaves were added on December 22, 1942, while he was serving as the SS-Oberführer and commander of a Kampfgruppe.
All of his military accomplishments were rendered meaningless by his execution sentence on April 28, 1945.

Hermann is one of the wealthiest and most well-known criminals. Hermann Fegelein’s net worth is $5 Million based on our analysis of data from sources including Wikipedia, Forbes, and Business Insider.