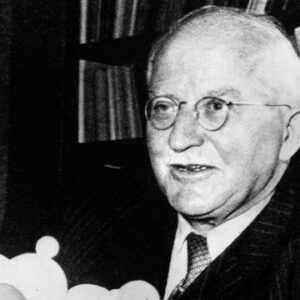 Hermann Staudinger was a German chemist who won the “Nobel Prize in Chemistry” in 1953 for his modern idea of polymers, which he showed to be giant molecular structures held together by covalent bonds. He and J. Fritschi came up with the idea in the early 1920s, but at first, people didn’t like it. He came up with the word “macromolecule,” which means “big molecule.” He started to look at polymers when he was doing research for the German chemical company BASF on how to make isoprene, a monomer of natural rubber. Staudinger and other researchers showed that polymers are long-chain molecules made up of small molecules that interact chemically, not physically, as was thought at the time. He showed that these chain-like molecules could be made using different methods, and that they could still be the same molecules even after being changed chemically. Staudinger’s groundbreaking work not only laid the theoretical groundwork for polymer chemistry, but also paved the way for the development of modern plastics. This helped the plastics industry grow in a big way. This research also helped the field of molecular biology, which tries to figure out how proteins and other large molecules in living things are put together. He is also known for finding ketenes, which are organic compounds, and the “Staudinger reduction” or “Staudinger reaction.”

On March 23, 1881, his parents, Dr. Franz Gottfried Christian Karl Georg Staudinger and Auguste Staudinger brought him into the world in Worms, Rhineland-Palatinate, Germany. His father was a philosopher in the neo-Kantian school.

After that, he went to the “University of Halle” and then, when his father got a new teaching job in Darmstadt, he switched to the technical university there.

Then, he went to Munich and Halle to study more. In 1903, he got his Ph.D. from the “University of Halle” by writing a thesis about the malonic esters of unsaturated compounds.

After getting his Ph.D., he joined the “University of Strasbourg,” where he worked with Professor Johannes Thiele, a famous German chemist, and made his first discovery, the ketenes. Staudinger looked at the Ketenes as a group. This was the first time anyone had done this.

These are organic compounds with the form R′R′′C=C=O. They are very reactive and were later found to be important steps in making antibiotics like amoxicillin and penicillin.

His research led to the discovery of ketenes, which he used to write his “Habilitation” in 1907. This is the highest academic degree a scholar can get. In November of the same year, he was hired as an Assistant Professor of Organic Chemistry by the Institute of Chemistry at the Technical University of Karlsruhe. During his time at the university, he was able to find and separate a number of useful organic compounds.

In 1910, he was working for the German chemical company BASF on the synthesis of isoprene, which is a monomer of natural rubber. During this time, he started looking into polymers. Through his ground-breaking research, he published a paper in 1920 that said polymers like rubber, starch, proteins, and cellulose are made of long-chain molecules that are made when molecular units interact chemically.

Leading chemists at the time, like Heinrich Wieland and Emil Fischer, thought that these high-molecular-weight compounds were made when small molecules physically clumped together to form colloids. This idea was different.
In 1912, he became a professor at the Swiss Federal Institute of Technology in Zürich, Switzerland. He worked there for 14 years, from 1912 to 1926.

In 1919, he and his colleague Meyer did research and found that the anion azide reacts with triphenylphosphine, a common organophosphorus compound that is often used as a reducing agent, to make phosphatide. This chemical change is called the “Staudinger reaction” or the “Staudinger reduction” in his honor.

In 1922, he and J. Fritschi came up with the idea that polymers are big molecular structures held together by covalent bonds. He also showed that different methods could be used to make chains of molecules, which he called macromolecules, and he suggested that these molecules with high molar masses could still be the same even after being changed chemically.

In 1926, he became a lecturer of chemistry at the “University of Freiburg,” which is in Freiburg in Breisgau, in southwest Germany.

In 1940, he took on more work when he became the head of the “Research Institute for Macromolecular Chemistry.” In the same year, he started the first polymer chemistry journal.

He was chosen to be the head of the “State Research Institute for Macromolecular Chemistry” in 1951, a job he held until April 1956.
He wrote a lot, and over the years he wrote many books. Some of the books he wrote and had published are “Die Ketene” (1912), “Die hochmolekularen organischen Verbindungen, Kautschuk und Cellulose” (1932), “Makromolekulare Chemie und Biologie” (1947), and “Arbeitserinnerungen” (1961).

He was a member and honorary member of many Chemical Societies, such as Tokyo’s “Society of Macromolecular Chemistry.”

His groundbreaking explanation of the nature of large molecules, which he called “macromolecules,” led to the creation of a new field of chemistry called “polymer chemistry.” He saw the field’s potential a long time ago, and his groundbreaking research led to a new era of textiles, plastics, and other polymeric materials.

Engineers can make structures that are lighter and last longer while also making products that are more affordable.
His work on polymers also led to the development of molecular biology, which tries to figure out how proteins and other living things with a high molar mass are put together.

In 1927, he got married to Magda Woit, a plant physiologist from Latvia. She worked with him for many years, and Staudinger thanked her for her help when he accepted the Nobel Prize. Magda also wrote with him on many of his books.

In 1999, the “Gesellschaft Deutscher Chemiker” and the “American Chemical Society” named his work an “International Historic Chemical Landmark” in honor of his important contributions to chemistry.