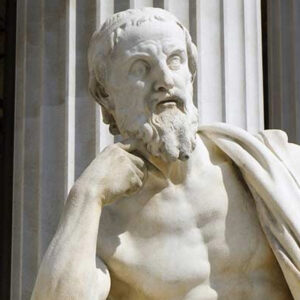 Herodotus, also known as “The Father of History,” was a Greek historian. He was a contemporary of Socrates and lived in the fifth century BC. He was a significant character in Greek history, and he is credited with being the first historian to deviate from Homeric tradition by treating historical themes as a method of research. He meticulously and critically gathered his materials before arranging them into a historiographic narrative. ‘The Histories,’ a record of his “inquiry” into the origins of the Greco-Persian Wars, is regarded as the first great narrative history produced in the ancient world, despite the fact that he is only known to have produced one work, ‘The Histories,’ a record of his “inquiry” into the origins of the Greco-Persian Wars. He was said to have traveled extensively across the Persian Empire, including Egypt and Elephantine, as well as Libya, Syria, Babylonia, Elam, Lydia, and Phrygia. He spent numerous years of his life traveling to distant countries and empires, gaining invaluable expertise and information. One of Herodotus’ most notable characteristics was that he told history in a storyteller’s style, frequently interspersing entertaining anecdotes and intriguing dialogues. Despite the fact that some of his descriptions are regarded to be erroneous, he remains the most reliable source of genuine Greek history for the years 550 to 479 BC.

Herodotus’ life is shrouded in mystery. Scholars frequently consult his own writings to learn more about his life. He is thought to have been born around 484 BC at Halicarnassus.

He was the son of Lyxes and Dry, and the brother of Theodorus, according to certain traditions. He was also related to Panyassis, an epic poet of the time. His family had a lot of clouts.

His poems reflect a fondness for the Greek island of Samos, implying that he may have spent his youth there. It’s possible that his family was implicated in an insurrection against Lygdamis, which resulted in their exile to Samos.

Because of their power, the family may have played a personal role in the tyrant’s downfall.

Herodotus most likely began traveling when he was a young man. He traveled to Egypt in 454 BC, or possibly earlier. He may have been associated with Athenians, according to his eyewitness testimonies.

He is thought to have traveled from Tyre to Babylon through the Euphrates River. He became involved in local politics during this period, which made him unpopular in Halicarnassus.

So, in 447 BC, he moved to Periclean Athens, a city recognized for its democratic institutions. He made friends with prominent citizens such as the Alcmaeonids clan.

He quickly established himself as a respected citizen in the area, and the Athenian assembly rewarded him financially for his efforts. In 443 BC, or shortly thereafter, he moved to Thurium as part of an Athenian-sponsored colony.

Over the course of his life, he traveled to numerous locations. He also traveled to Libya, Syria, Babylonia, Elam, Lydia, and Phrygia, in addition to Egypt.

He also traveled to Byzantium, Thrace, and Macedonia via the Hellespont (now Dardanelles). In addition, he traveled along the Black Sea’s northern beaches as far as the Don River and inland.

He was a prolific writer well known for his narrative on the Greco-Persian Wars, ‘The Histories.’ Although it is unknown when, where, or in what order the work was composed, it is thought to have taken several years of his later life.

It’s likely that he started working on it much earlier in life, but it wasn’t finished until his latter years.
His seminal work covers the preludes to conflicts between Greece and Persia (499–479 BC).

Each of the nine books in ‘The Histories’ describes a different element of the wars. The volume also includes extensive descriptions of the Persian Empire’s topography, social structure, and history.

Even though he is regarded as a significant Greek historian, the correctness of his writings has been a source of contention since his time.

Several notable figures, including Cicero, Aristotle, Josephus, Duris of Samos, and Plutarch, have weighed in on the debate. Modern historians and philosophers, on the other hand, are generally more optimistic.

‘The Histories,’ by Herodotus, is now regarded as the first work of history in Western literature. The essential book is a record of old traditions, politics, geography, and clashes between diverse cultures that existed at the time in Western Asia, Northern Africa, and Greece.

The work is also credited with establishing the historical genre and study in the Western world.

He was a world traveler with a keen eye for detail. He was fascinated by the habits and rituals of the various locations he visited, as well as the history of his fellow countrymen. He was also a fantastic storyteller, and his treatises were written in a narrative, easy-to-read style. He is said to have died in Thurii, Calabria, or Pella, Macedonia, around 425 BC.

Herodotus is the sole beneficiary of the satrapy’s income. $1.1 million is the value of one’s net worth.