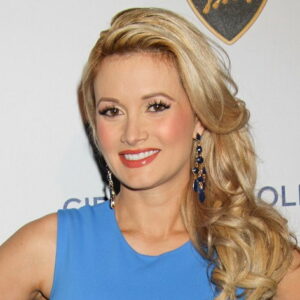 Holly Madison is a best-selling author, model, and reality TV star from the United States. She is most known for her roles in ‘The Girls Next Door,’ a reality TV show about her and her two co-stars’ lives at the Playboy Mansion, and ‘Holly’s World,’ a show about her life at Planet Hollywood in Las Vegas. She began her career as a model and made her film debut in the American found footage horror thriller ‘The Last Broadcast’ in 1998. Stefan Avalos and Lance Weiler wrote and directed the film, which followed a documentary filmmaker who investigates the murders of two TV personalities. She went on to star in a number of reality TV shows after that, mostly in minor or cameo roles. She has also been featured in a number of well-known fashion magazines. After a long break in the late 2000s, her growing success as a reality TV personality prompted her to return to the world of filmmaking. Madison has also been in the spotlight as a result of troubles in her personal life. She was once the girlfriend of Hugh Hefner, the founder of ‘Playboy’ magazine, which brought her a lot of attention. The breakup of their relationship was widely reported in the media.

Holly Madison was born in the United States on December 23, 1979, in Astoria, Oregon. Steve Cullen is her father, and Patsy Cullen is her mother.

Her family eventually moved back to Oregon when she grew up and spent part of her youth on Prince of Wales Island near Ketchikan, Alaska.

She majored in theatre and psychology at Portland State University. She later relocated to Los Angeles to pursue her ambitions. She went to Loyola Marymount University there. To pay for her tuition, she worked as a model and a waiter.

The Career of Holly

She rose to fame as the star of the reality TV show ‘The Girls Next Door,’ which premiered on the ‘E! network’ in August 2005. Hugh Heffner’s girlfriends stayed with him at the Playboy Mansion, and the show was created by Kevin Burns and Hugh Heffner.

The show lasted six seasons and aired till 2010. The show quickly grew to over a million viewers and became one of the most popular shows of all time. Ratings and views, on the other hand, began to decline gradually, particularly during the penultimate season.

Holly Madison had her own reality show, ‘Holly’s World,’ in which she played the starring role. Her life at Planet Hollywood in Las Vegas was the focus of the show. The show was a hit, with 1.879 million people watching the first season premiere. The show aired for two seasons, from 2009 to 2011.

She wrote two books about her time at the Playboy Mansion. ‘Down the Rabbit Hole: Curious Adventures and Cautionary Tales of a Former Playboy Bunny’ was released in 2015. It became a best-seller, debuting at the top of the New York Times Bestseller list.

‘The Vegas Diaries: Romance, Rolling the Dice, and the Road to Reinvention was her next memoir, which she released in 2016. It was a success, and it debuted on the New York Times Bestseller list, just like her previous work.

In 2015, she starred in the third installment of the Sharknado franchise, ‘Sharknado 3: Oh Hell No!’ Lieutenant Harrison was a character she played in a supporting role.

One of Holly Madison’s most important works was ‘The Girls Next Door,’ which broadcast on the ‘E!’ network. The show premiered in 2005 and lasted six seasons till 2010. Bridget M

arquardt, Kendra Wilkinson, and Crystal Harris starred in the show, which was co-created by Hefner and Madison. The show centered on Hefner’s Playboy Mansion companions, as well as events such as the Playboy Jazz Festival at the Hollywood Bowl, Playmate test shots at Playboy Studio West, and Operation Playmate.

Holly’s own television show, ‘Holly’s World,’ premiered on the ‘E! Network’ in 2009. Her new life in Las Vegas, where she worked as a lead dancer for Planet Hollywood, was the subject of the performance. The show lasted till 2011 and included two seasons.

Holly Madison made her acting debut in the 2009 horror thriller ‘The Telling,’ in which she portrayed the lead. The film, directed by Jeff Burr and Nicholas Carpenter, tells three different horror scenarios, each told by a different girl.

Bridget Marquardt, Nicole Zeoli, Lola LaBelle, and Jean-Louise O’Sullivan also appeared in the film. The Playboy Mansion and the Hollywood Castle were used for the majority of the filming.

Madison starred in the third Sharknado film, ‘Sharknado 3: Oh Hell No!,’ which was released in 2015. It starred Ian Ziering, Tara Reid, Cassie Scerbo, and Bo Derek and was directed by Anthony C. Ferrante. Lieutenant Harrison was a character played by Holly in a supporting role. On July 22, the film premiered on the Syfy network.

Holly Madison became one of Hugh Hefner’s girlfriends after moving into the Playboy Mansion in 2001. In 2008, their relationship terminated.

Holly Madison has a net worth of $16 million and is an American Playboy model, showgirl, and reality TV personality.