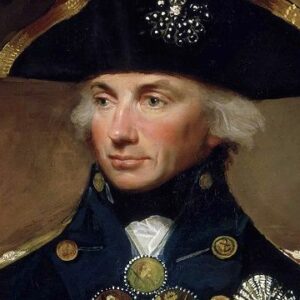 Lord Horatio Nelson is regarded as one of Britain’s most heroic figures. He was a British flag officer who was well-known for his service in the Royal Navy and during the Napoleonic Wars as the first Viscount. What distinguished Nelson from other Navy officers was his acute understanding of strategy and unconventional tactics. These abilities resulted in a series of decisive naval victories for him. He steadily rose through the ranks and served under some of the period’s most prominent naval commanders before assuming command of his own ship in 1778. The Royal Navy established its supremacy over the French under Nelson’s leadership. His most famous engagement, at Cape Trafalgar, averted Napoleon’s invasion of Britain. In 1805, during the Battle of Trafalgar, his fleet was engaged, and he was fatally wounded by a French sniper. His assassination elevated him to the status of one of Britain’s most heroic figures and established a legacy that has remained highly influential to this day.

He began his career as an ordinary seaman and coxswain on the HMS Raisonnable at the age of 12. Soon after, he was appointed midshipman and began his officer training.

He advanced through the ranks, eventually rising to the rank of captain in 1778. Later in his career, he served in the West Indies, the Baltic, and Canada. He was given command of the Agamemnon in 1793, following Britain’s entry into the French Revolutionary Wars.

While serving in the Mediterranean, he assisted in the capture of Corsica and fought alongside Lieutenant General Charles Stuart in the Battle of Calvi. While he was supervising the bombardment of the enemy camp, Stuart advanced and took control of the area. He sustained irreparable damage to his eye and eventually lost sight in his right eye as a result of the constant bombardment.

Following this, in 1797, he led the British navy to a stunning victory over the French at the Battle of Cape St. Vincent. His signature style of defying official orders and acting independently proved worthwhile, as it aided in the victory.

Following his victory at the Battle of Cape St Vincent, he took part in the attack on Santa Cruz de Tenerife in the Canary Islands, where he lost his right arm. He was then compelled to return to England in order to recover.

The following year, he defeated the French in the decisive Battle of the Nile and remained in the Mediterranean to defend the Kingdom of Naples from a French invasion.

Following that, he fought in the Battle of Copenhagen. Despite losing his sight and having his arm amputated, he continued to play a dominant role in the combat, disobeying orders to halt the action by placing his telescope to his blind eye and claiming he couldn’t see the withdrawal signal.

By 1801, his ability and stature had earned him the rank of Vice-Admiral. After assuming the position, he became increasingly involved in France’s Napoleonic wars.

Following a brief return to England, he assumed command of the C diz blockade in 1805. That same year, he was involved in what would prove to be his final battle. The Franco-Spanish fleet emerged from port, and at the Battle of Trafalgar, his fleet engaged them. The battle was Britain’s greatest naval victory, but Nelson was mortally wounded.

In 1802, he was awarded the honorary degree of Doctor of Civil Law by the University of Oxford.

He was elected a Freeman of Bath, Salisbury, Exeter, Plymouth, Monmouth, Sandwich, Oxford, Hereford, and Worcester.

At the time of his death, he held numerous titles, including Viscount and Baron Nelson of the Nile and Burnham Thorpe in the County of Norfolk, Baron Nelson of the Nile and Hilborough in the said County, Knight of the Most Honourable Order of the Bath, Vice Admiral of the Fleet’s White Squadron, Commander in Chief of his Majesty’s Ships and Vessels in the Mediterranean, Duke of Bront in the Kingdom of Sicily, and Knight Grand Croix.

On March 11, 1787, he married Frances Fanny Nisbet, a young widow, at Montpelier Estate on the Island of Nevis.

He was dating Emma Hamilton, the wife of William Hamilton, the British Ambassador to the Kingdom of Naples at the time. The two were blessed with an illegitimate daughter – Horatia – while on a voyage to England.

He was fatally wounded by a French sniper during the Battle of Trafalgar, which resulted in his death. Later, his body was returned to England from Victory at the Nore. He was laid in state for three days at Greenwich’s Painted Hall.

His coffin, which was taken to the Admiralty for the night, was later carried in a funeral procession led by 32 admirals, more than a hundred captains, and a 10,000-strong escort from the Admiralty to St Paul’s Cathedral. He was interred four hours later in a sarcophagus originally carved for Cardinal Wolsey.

Numerous monuments have been erected in his memory posthumously, including Nelson’s Column in London’s Trafalgar Square, Nelson’s Pillar in Dublin, a statue in Montreal, and a blue plaque from the Royal Society of Arts.

Horatio Nelson’s net worth is estimated to be between $1 million and $2 million.