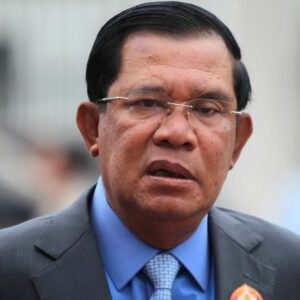 Politicians can be very divisive figures because they have both fans and haters. Hun Sen, the 34th and current Prime Minister of Cambodia, is one of these people. He is also one of the most divisive politicians in the world. Last January was his 30th year as head of government, making him the longest-serving leader in the country and one of the longest-serving leaders in the world. His rise to Cambodia’s most powerful political position has been marked by violence, corruption, and scandal. This makes him one of the most infamous world leaders. In his teens, he left his studies at a Buddhist monastery to join the communist Khmer Rouge. This was the first step on his violent path to becoming Prime Minister. The young man quickly moved up the ranks because he was smart and driven. He has shown himself to be smart, sneaky, and a good manipulator during his time as Prime Minister of Cambodia. Opponents of his rule have said that political prisoners of the former Khmer Rouge Battalion Commander were tortured by being shocked with electricity or burned with hot irons. History shows that Hun Sen will do anything to hold on to power with an iron grip. Read on to learn more about his life and works.

Hun Sen was born in Kampong Cham, a city northeast of Phnom Penh, Cambodia’s capital, on August 5, 1952. His real name at birth was Hun Bunal.
As a young boy, he went to a local elementary school and worked in farming. In 1965, he left home to go to school in Phnom Penh to become a Buddhist monk.

In 1969, a year before he was to graduate, he stopped going to school. After a year, he changed his name to Hun Sen and joined the Khmer Rouge.
His parents are peasant farmers, and he is the third of their seven children. Before he was born, one of his siblings died. His mother, Dee Yon, died at age 79 from sickness in 1998.

Before he joined the French resistance, his father, Hun Neang, was a monk at a local vat. He died on July 12, 2013, when he was 89 years old. He had been sick for a long time.

After the Cambodian military took over and got rid of Prince Norodom Sihanouk in 1970, he joined the “Khmer Rouge.” On April 30, he was put in charge of his platoon after only two weeks of training.

In 1971, he joined the “Youth League of the Communist Party of Kampuchea (CPK)”. After that, he quickly moved up the ranks and became one of the most well-known people at the party.

He lost an eye in the battle for Phnom Penh on April 16, 1975. The “Khmer Rouge” won, and he was put in charge of a special regiment that worked on its own in the East Zone.

In 1977, he and other leaders from the eastern zone fled to Vietnam to get away from “Pol Pot,” who wanted them to attack more Vietnamese villages in self-destructive ways. They got away from the “Khmer Rougeinternal “‘s purges.
After the Khmer Rouge government was overthrown on January 10, 1979, he became the Foreign Minister of the “People’s Republic of Kampuchea/State of Cambodia.” This government was set up by the Vietnamese.

On January 14, 1985, he was elected Chairman of the “Council of Ministers” and then Prime Minister. The position became open when the previous chairman, Chan Sy, died the month before. Hun Sen slowly took over the job.

During the elections in 1993, Prince Norodom Ranariddh’s “Royalist Party” got more votes than him. Hun Sen refused to step down, so an agreement was made and put into place. He became the second prime minister, and the prince became the first.

In July 1997, he started the violent “1997 Cambodian Coup,” which got rid of Prince Ranariddh and put Ung Hout in his place as the first Prime Minister. The next year, Hun Sen won the election and became Cambodia’s only Prime Minister again.

After winning the general elections on September 25, 2008, he was re-elected as Prime Minister for the next five years. In 2013, he said that he planned to rule Cambodia until he was 74 years old. People didn’t agree with the decision, since the other party also said it had won the election.

After the leader of the country said that he didn’t want to give up power, the Cambodian National Rescue Party and other protest groups held peaceful rallies in Phnom Penh.

They asked for new elections because they thought the ones on July 28, 2013, were unfair. The protests got the attention of the United Nations, which criticized Sen for using force to get rid of peaceful protesters.

Hun Sen was one of the most important people at the “1991 Paris Peace Talks.” On October 23, 1991, the “Paris Peace Agreement” was signed by Cambodia, Vietnam, and 15 other countries that were part of the “International Peace Conference” on Cambodia. This marked the official end of the “Cambodian-Vietnamese War.”

In 1999, Cambodia joined the Association of South-East Asian Nations (ASEAN) as its 10th member. The group encourages political and economic cooperation and stability in the region.

Sri Chinmoy Centers International gave him its highest award, the “U Thant Peace Award,” on September 6, 2005, for his work to help Cambodia and the other “ASEAN” countries move forward.

In 1975, he got married to Bun Rany, who worked in public health and ran a Khmer Rouge hospital. There are six kids in the family.

Manet, his oldest son, is a Lieutenant General in what is called the “Royal Cambodian Armed Forces.” Malis, his youngest child, was taken in by a family.

In 1987, “Amnesty International” said that he had hurt thousands of political prisoners by torturing them. Some of the tools used to do the jobs were iron bars and rubber hoses.

He is said to have had a relationship with the actress Piseth Peaklica. In July 1999, a woman was killed while shopping at a Phnom Penh market. There were rumors that First Lady Bun Rany had asked for her death.

Brad Adams, who is the Asia Director at “Human Rights Watch,” says that a U.S. State Department official told him in 2002 that Hun Sen was worth about $500 million. The Prime Minister doesn’t like to talk about how rich he is.