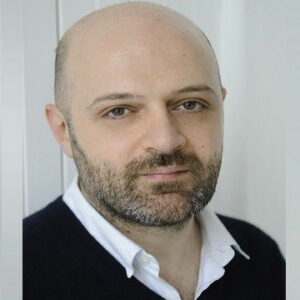 Cypriot-British fashion designer Hussein Chalayan is renowned for incorporating philosophical topics into his creations. As one of the most daring and innovative designers of the modern age, he has developed designs such as clothing that resemble furniture and a robot dress adorned with Swarovski crystals. His works have been exhibited in institutions such as the Palais du Louvre, London’s Design Museum, the Metropolitan Museum of Art in New York, and the Museum of Contemporary Art in Tokyo. He is renowned internationally for his futuristic and intellectually challenging designs. Born in Cyprus to Muslim parents, he grew up during a time of political unrest and bloodshed. While the situation in their homeland became intolerable, his family relocated to England when he was a little child. He studied Fashion Design at Central Saint Martins College of Art and Design in London and wowed the fashion community with his “The Tangent Flows” graduating collection, which was purchased in its whole by high-fashion shop Browns. Eventually, he founded Cartesia Ltd. and introduced a line of ready-to-wear clothing. ‘Time’ magazine named him one of the ‘100 Most Influential Innovators of the 21st Century’ He is the recipient of a number of fashion awards and was also named one of the ‘100 Most Influential Innovators of the 21st Century

Hussein Chalayan was born on August 12, 1970, to Muslim parents in Nicosia, Cyprus. The 1970s were a time of political unrest and widespread violence in the United States. Eventually, the continued ethnic tensions between the Turkish and Greek Cypriot communities culminated in the Turkish invasion of Cyprus, which escalated the violence against people on both sides.

In 1978, Chalayan’s family was compelled to depart their native country and relocate to England. After graduating from Highgate School, he went in Warwickshire School of Arts to pursue a National Diploma in fashion and clothing.
In 1989, he attended the famed Central Saint Martins College of Art and Design in London to study Fashion Design.

Creative and cerebral, he quickly gained a reputation as one of the most radical design students at the institution.
In 1993, he presented his graduating collection entitled “The Tangent Flows,” in which he displayed garments that he had buried in his backyard for six weeks and excavated shortly prior to the show. The burial and decomposition process was symbolic of life, death, and urban decline.

Hussein Chalayan interned for Timothy Everest, a Savile Row tailor, after which he created his own independent design label in 1993 and founded Cartesian Ltd. in 1994.

He showed his first collection in London’s West Soho Galleries and made a critically hailed debut at London Fashion Week. During this time, he devised body-restricting designs, such as his cocoon garment, which confined the wearer’s arms to the sides of the body.

He attempted to include intellectual and technological elements into his fashion designs, connecting the human body and clothing with science and culture. His fashion shows were more like theatrical performances than fashion shows.

In 1995, he collaborated with the avant-garde icon Bjork and designed a number of garments for her, notably the jacket she wears on the cover of her album Post.’ The singer modeled for Chalayan during London Fashion Week in October 1995.

In 1998, Chalayan was appointed creative director of TSE New York and produced a sportswear collection for the band. In the same year, he planned a catwalk with female models in varying degrees of nudity and wearing traditional Muslim headdresses. This caused considerable controversy in the Muslim world but boosted the designer’s reputation for being original and daring.

Despite the critical accolades he got and the honors he won, he was forced to declare bankruptcy in 2001 after accumulating over $1.5 million in debts.
Shortly after filing for bankruptcy, he was hired as creative director of the jewelry company Asprey, where he served until 2004. In 2008, a few years later, he was appointed creative director of Puma AG.

During the 2000s, he worked diligently to reestablish his firm and added a menswear brand to his design portfolio in 2002. He produced a more economical secondary line for men in 2004 and a line for ladies in 2005.
In addition to creating clothing, he also creates short films. In 2002, his video “Ambimorphous” was shown at Mode Natie in Antwerp, and in 2005, “Absent Presence” represented Turkey at the 51st Venice Biennale.

In his ‘Before minus now’ collection for Spring/Summer 2000, he presented a sequence of gowns with wire-frame architectural prints against static white backgrounds made by a computer program.

His “Remote Control” dress, which incorporated the aerodynamics of airplane travel into its design, was the first fully functional wireless technology to be displayed in a fashion garment. In 2000, it was featured at the Hyères Festival in France.

In 2008, he presented a collection of laser LED garments he made in partnership with the luxury brand Swarovski in Tokyo.

In 1999 and 2000, Hussein Chalayan won the British Fashion Award for Designer of the Year.
For his achievements in the fashion business, he was appointed a Member of the Most Excellent Order of the British Empire (MBE) in the Queen’s Birthday Honours List in 2006.

In 2009, he received the Outstanding Lifetime Achievement in Design award at the London FX International Interior Design Awards.

Hussein Chalayan is a highly mysterious individual who guards his private life. His parents divorced while he was relatively young, and his mother significantly impacted the growth of his artistic ability.

Hussein Chalayan has an estimated net worth of $3 million dollars and earns mostly as a fashion designer, businessperson, costume designer, artist, and university professor. We lack sufficient evidence regarding Hussein Chalayan’s automobiles and way of living.