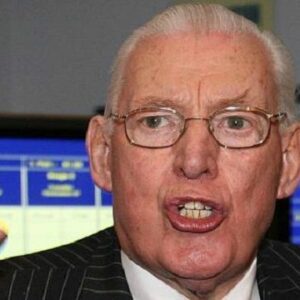 Ian Paisley was born to profoundly religious parents and knew from an early age that he would become a priest. He enrolled in theological school and became an ordained pastor after presenting his first sermon as a youngster. Paisley created his own sect after being expelled from his home church due to a highly divisive speech. He became its permanent leader. Paisley, who loved to use his booming voice to preach against all things Catholic, queer, and different, energizing his audience to join him on divisive protest marches. Despite several citations for unruly conduct, he was adamant about being in the spotlight. Paisley created his own hardline party after believing that politicians were too “soft.” Paisley became the uncompromising face of the Unionist cause during ‘The Troubles’ in Northern Ireland, with his fiery sermons and self-admitted bigoted political and theological views. However, as he approached the end of his life, Paisley stunned even his most ardent fans when he decided to meet with his long-time political foes in an effort to cease the bloodshed and turmoil. While it is regrettable that Paisley’s strong, uncompromising speech stoked ethnic tensions in Northern Ireland, it is also acknowledged that peace would not have been achieved without his support.

Ian Paisley was born Ian Richard Kyle Paisley in Armagh, Northern Ireland, on April 6, 1926. His mother was a Christian evangelist and his father was a Baptist preacher.
Paisley preached his first sermon at the age of 16 in 1941. Five years later, he was ordained as a Presbyterian preacher.

Paisley founded the ‘Free Presbyterian Church of Ulster in 1951, after a disagreement with church elders.
Paisley rose to national prominence after illegally assisting a 15-year-old Catholic girl in escaping to Scotland in 1956.

Paisley co-founded the Ulster Protestant Action (UPA) in 1956, one of several pro-Unionist militant organizations involved in Northern Ireland during ‘The Troubles.’
He encouraged the UPA to target Catholic homes in Belfast in 1959. Several establishments were plundered and ransacked.

In 1964, Paisley organized a march in Belfast to force a local official to take down the Irish flag from his office. His rhetorical march turned violent, resulting in dozens of injuries.
In 1966, he co-founded the ‘Ulster Constitution Defence Committee (UCDC), a pro-Unionist militant group that ultimately merged with the ‘Ulster Protestant Volunteers (UPV).

On June 6, 1966, the religious leader led a march into Belfast’s Catholic communities, which resulted in violence. He was detained and given a three-month sentence.
Paisley blamed his adversaries in the ‘Irish Republican Army’ (IRA) for firebombing water and electrical installations in Northern Ireland in 1969.

Following the bombings carried out by the UPV but placed on the IRA on April 28, 1969, support for Unionist Prime Minister Terence O’Neill weakened, and he resigned.
Large-scale riots in Belfast prompted the deployment of British troops in August 1969, formally kicking off the period of civil unrest known as ‘The Troubles.’

Special by-elections were held on April 16, 1970, and Paisley gained O’Neill’s abandoned seat in North Antrim, which he would maintain for the next 40 years.

He created the Democratic Unionist Party (DUP) in 1971, which he led for the next 37 years.
The ‘Sunningdale Agreement’ of 1973 established a framework for Unionists and Nationalists in Northern Ireland to share power. Paisley and the DUP were adamantly opposed.

Paisley led a nationwide strike in 1977 to persuade the British government to implement tougher anti-IRA actions. He was elected to the European Parliament two years later.
He co-founded the ‘Third Force,’ a pro-Unionist violent movement, in 1981.

In an attempt to bring peace to the region, eight parties in Ireland and Northern Ireland signed the Good Friday Agreements in 1998. Despite the fact that the agreement was backed by 70% of Northern Ireland people and 90% of Republic of Ireland voters, Paisley’s DUP refused to join.

Paisley’s DUP won a majority in the Northern Ireland assembly in 2003. (parliament). Three years later, he reversed decades of hostility by agreeing to a power-sharing arrangement with Sinn Fein, his longstanding opponents.

Paisley was elected Prime Minister of Northern Ireland in 2007, with Martin McGuinness of the Republican Party serving as his Deputy First Minister. Paisley and McGuinness became known as the ‘Chuckle Brothers’ after establishing a friendly connection.

Paisley resigned as Prime Minister in 2008, citing poor health as one of the reasons, and quickly began to withdraw from public life.

Paisley’s historic agreement to share power with his lifelong opponents in 2006 is widely seen as the pivotal moment in Northern Ireland and the Republic of Ireland’s long-term peace. He was elected Prime Minister of Northern Ireland after changing his political views.

In 1966, ‘Bob Jones University bestowed an honorary ‘Doctorate of Divinity on Paisley.
On June 18, 2010, the religious leader and politician were made a British life peer and given the title ‘Lord Bannside of North Antrim.’

Paisley’s DUP is now the most prominent party in Northern Ireland, and his 1951-founded ‘Free Presbyterian Church of Ulster’ today boasts 12,000 members worldwide.

He married Eileen (née Cassells) on October 13, 1956, and they had five children together: Rhonda, Sharon, Cherith, Kyle, and Ian Junior.
In 2010, his son Ian Paisley, Jr. took over as the Member of Parliament for North Antrim.

Paisley died of heart failure in a Belfast hospital on September 12, 2014, accompanied by his adoring family and his wife of more than 50 years.
At the Ulster Hall, 800 people attended a public tribute held in remembrance of the leader.

Ian Paisley Jr has a net worth of $ USD 9 million and makes his living as a politician. We don’t have enough information about Ian Paisley Jr’s cars or lifestyle.

This well-known religious figure flung snowballs at the visiting Irish Prime Minister in 1965.
This politician’s most famous remark is “No surrender!”

‘The Clergyman in Jackboots’ and ‘Dr. No’ are two nicknames for this well-known figure. The campaign slogan of this well-known politician is “Vote for my wife’s spouse.”