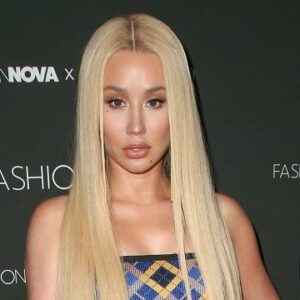 Amethyst Iggy Azalea (born Amelia Kelly) is an Australian rapper, singer, songwriter, and model who became the first female and non-American rapper to top the Billboard Top R&B/Hip-Hop Albums list. She traveled to America, the cradle of hip-hop music, to pursue a career as a musician. When the music videos for her songs ‘Pu$$y’ and ‘Two Times’ went viral on YouTube, she got media notice. Her debut mixtape, ‘Ignorant Art,’ gained her notoriety, but her debut studio album, ‘The New Classic,’ boosted her profile. ‘Fancy,’ ‘Work,’ ‘Black Widow,’ ‘Team,’ and ‘Change Your Life’ are some of her chart-topping singles. Rita Ora, Tyga, Beyoncé, and T.I. are among the musicians with whom she has collaborated. She, along with ‘The Beatles,’ holds the record for winning the top two spots on the ‘Billboard’ list with her first two ‘Hot 100’ entries. She’s also modeled for high-end brands and appeared in the film ‘Furious 7.’ She was in a three-year romance with NBA basketball player Nick Young before calling it quits. ‘Azalea Street Productions,’ her own production company, was founded in 2016.

Iggy Azalea was born Amethyst Amelia Kelly in Sydney, Australia, on June 7, 1990. When she was a baby, her family relocated to Mullumbimby, New South Wales.
Brendan Kelly, her father, was a painter and comic book artist. Tanya, her mother, worked as a maid at vacation homes and hotels. When she was a teenager, her father pushed her to pursue a career in the visual arts.
Azalea used to despise school because of the scorn she received for her homemade clothing. She, on the other hand, was enthralled by her painting lesson. She eventually dropped out of high school and began working with her mother to gather funds so that she could pursue her ambition of emigrating to the United States.
She began rapping when she was 14 years old, and she even established a group with two other girls. However, her bandmates were not serious about pursuing a career in music, and the group was finally split.
She has been drawn to hip-hop music since she was 11 years old. In her birthplace, however, she felt isolated because no one shared her hobbies. She contacted Derek, a kid from the Bahamas, online and began sharing her rap tracks with him in exchange for his feedback.
She persuaded her parents to let her go on a holiday trip to America just before her 16th birthday, and she travelled to Miami, where Derek was living at the time. She told her family shortly after that she had opted to pursue her singing career in the United States and would not be returning home anytime soon. She worked illegally in the United States for six years without a work visa.

Iggy Azalea began her music career by working with Backbone, a member of Atlanta, Georgia-based hip-hop group ‘Dungeon Family.’ She met FKi and Natalie Sims during this time, with whom she would later collaborate.
She moved to Los Angeles in 2010. ‘Ignorant Art,’ her first full-length mixtape, was released the following year. Her songs’ music videos became viral, and her album was hailed for its aggression.
She returned to music in 2012, after a brief career as a model, and enlisted the support of Southern rapper T.I. for the release of her debut studio album, ‘The New Classic.’ However, the record was put on hold after T.I.’s involvement in the project was opposed to by ‘Interscope Records,’ her manager at the time. ‘Def Jam Recordings’ later published the album in April 2014.
She decided to create an EP called ‘Glory’ to keep her admirers entertained. She includes the single ‘Murda Bizness,’ which was supposed to be on her debut album but was never released. In June 2012, she released a new track called “Millionaire Misfits.”
‘TrapGold,’ her second mixtape, was released in October 2012. ‘FKi’ and Grammy-nominated producer Diplo collaborated on the track.
She republished her album ‘The New Classic’ in November 2014 with the new title ‘Reclassified.’ Five new songs were included on the album, including ‘Beg for It’ and ‘Trouble.’
‘Digital Distortion,’ her second studio album, was set to be released in July 2016. However, due to her breakup with longterm lover Nick Young, she postponed the release till 2017.
In August 2018, she released her EP ‘Survive the Summer’ under the label ‘Island Records.’ Songs like ‘Tokyo Snow Trip’ and ‘Kream’ were included on the EP. In 2018, she founded her own record label, ‘New Classic Records,’ which she named after herself.
Her second studio album, ‘In My Defense,’ was released in July 2019 under her own record label, which was renamed ‘Bad Dreams.’ Music critics gave the album mixed to unfavorable reviews.

Iggy Azalea’s mixtape “Ignorant Art” shocked the music world in 2011. Her brashness wowed the critics, and she was praised for her “raw comments.”
Iggy Azalea’s debut studio album, ‘The New Classic,’ received numerous honors and nominations, including four Grammy nods. The album includes her most popular track, ‘Fancy,’ which was her first to reach the top of the Billboard Hot 100 chart. It remained at the top for seven weeks in a row.

Iggy Azalea was named to XXL’s “Top 10 Freshman List” in 2012. She is the first female rapper on the list, as well as the first non-American rapper.
In 2014, she received her first award at the ‘American Music Awards.’ She was the most nominated artist at the event that year, with nods in six different categories. She was named ‘Favorite Rap/Hip-Hop Artist’ and ‘Favorite Rap/Hip-Hop Album,’ respectively.
She was also the most nominated artist at the 2014 ‘MTV Video Music Awards,’ with eight nominations. For the track ‘Problem,’ she and Ariana Grande won an award for ‘Best Pop Video.’ In the same year, she received three ‘Teen Choice Awards.’
Azalea was nominated for four Grammy Awards in 2015. She received ‘Favorite Hip-Hop Artist’ at the 41st ‘People’s Choice Awards’ the same year. At the 2015 ‘Billboard Music Prizes,’ she received three awards out of a total of twelve nominations.
She is the only performer, aside from ‘The Beatles,’ to have two entries in the top two slots on the ‘Billboard Hot 100’ singles list. With ‘Fancy,’ her chart-topping hit from the album ‘The New Classic’ (2014), and ‘Problem,’ her collaboration work with Ariana Grande, she accomplished this accomplishment.

In 2011, Iggy Azalea began dating American rapper A$AP Rocky. Early the following year, she confirmed the relationship, even getting the title of Rocky’s breakout album, ‘Live. Love. A$AP,’ tattooed on her fingers. Rocky, on the other hand, stated in July 2012 that they were no longer dating. The ‘A$AP’ component of Azalea’s tattoo was eventually crossed out.
She began dating pro basketball player Nick Young in November of 2013. For a time, the couple lived together in Tarzana, California, and they also appeared on the cover of ‘GQ’ magazine. They got engaged in June 2015, but Azalea declared their split a year later. She has publicly admitted to having undergone plastic surgery, despite her earlier refusal to discuss it. She noted that there are aspects of herself that she dislikes but has learnt to accept, as well as aspects of herself that she has transformed as a result of surgery.
In 2016, she received the ‘Woman of the Year’ award from ‘GQ Magazine Australia.’

Iggy Azalea has a net worth of $15 million.

Her stage name combines the names of her favourite dog, ‘Iggy,’ and the street where she grew up, ‘Azalea Street.’ Her family continues to reside in Australia.