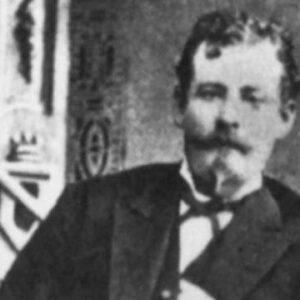 American robber Joseph Isaac “Ike” Clanton belonged to the legendary gang of bandits known as “The Cowboys.” He participated in the iconic 30-second firefight known as the Gunfight at the O.K. Corral, making him one of the almost mythical personalities of the American Old Wild West. Before Tombstone, Arizona was a town or even a mining hamlet, Clanton went there with his family after growing up in the frontier regions of Missouri. There, the family established the Clanton ranch, which eventually became incredibly successful. The Clantons rose to fame due to their irresponsible actions, cattle rustling, and bitter rivalry with the Earp brothers. Ike had a particularly strong dislike for Wyatt Earp and Doc Holliday. Following the incident at the O.K. Corral, where he lost one of his brothers, he accused the Earps and Holliday of murder. But because of Clanton’s contradictory testimony, they were ultimately found not guilty. He was slain six years later while attempting to elude an officer who was trying to take him into custody on suspicion of cattle rustling. Numerous books have been written about Clanton’s life, and actors such Grant Withers, William Tannen, Stephen Lang, and Jeff Fahey have played him in movies and TV shows.

Ike Clanton was born in 1847 to Mariah Sexton Clanton, née Kelso, and Newman Haynes Clanton, also known as Old Man Clanton, in Callaway County, Missouri. He has two sisters and three brothers. He lost his mother in 1866.
In or about 1877, Clanton moved to Tombstone with his family. His father, who was also a key player in the history of the American Wild West, worked as a farmer, a day laborer, and a gold miner among other things. The cattle rancher Newman had become well-known by the end of the 1870s.

The Clanton ranch was situated 12 miles outside of Tombstone in the lovely town of Lewis Springs. By 1881, Ike was working at the ranch with his brothers after previously operating a tiny lunch counter there where the Tombstone Mill once stood. A catastrophe struck the family that year. The Guadalupe Canyon Massacre, also known as the Old Man Clanton Massacre, occurred on August 13, when Mexican Rurales ambushed Old Man Clanton and several members of his posse.

The ranch gradually developed into a very lucrative business, and the Clantons rose to prominence as wealthy and influential residents of the town. Illegal cattle rustling helped to increase their revenue even more. The Clantons and their ranch laborers gained a reputation for acting rashly, being known as “The Cowboys” as a group. They are accused of murder and banditry in addition to livestock rustling over the Mexican-American border.

Wyatt, Virgil, Morgan Earp, Holliday, and “Curly Bill” Brocius were soon at odds with Ike Clanton and his allies, including Johnny Ringo, the McLaury brothers, and “Curly Bill” Brocius. During the town’s silver boom in the 1870s, the Earps had relocated to Tombstone. All three brothers held various law enforcement posts, and The Cowboys frequently made violent threats against them.

After only a few years in the boomtown, the Earps were vying with the Clantons for control of the political, judicial, and economic spheres of influence. Both families had a genuine disdain for one another, therefore the hostility also existed on a personal level. In the election of November 1880, the Cowboys supported the incumbent Sheriff Charles Shibell, while the Earps were outspoken in their backing of Bob Paul, who was Shibell’s main rival.

Clanton’s reputation as a person was not very good. He was well known for his frequent public boasting, heavy drinking, and gambling. He also had a short fuse and frequently got into trouble for talking too much.

Wyatt Earp had a horse taken by the Clantons in November of 1879, just after he arrived in Tombstone. He rode to Charleston, close to the Clanton ranch, with Holliday about a year later to get the animal. In a later court hearing, Earp confessed that Billy Clanton, Ike’s 18-year-old brother, had approached him and insulted him by asking if he had any further horses to “loose.” However, he did return the horse to Earp without even looking at the ownership documents, demonstrating to Earp that Billy was aware of who the animal actually belonged to.

Ike was upset by the incident, according to Sheriff Johnny Behan, a personal friend of the Clantons. Earp experienced the same results as well. He feared that Behan would win the upcoming election in Cochise County because he had defeated him in the race for undersheriff.

In order to swing the scales in his favor, Earp had to take dramatic action. In order to help Clanton find the perpetrators of the Benson Stage robbery, he contacted him on June 2, 1881, offering him both the Wells, Fargo & Co. prize and cash from his own pocket. But in the end, all of the preparation was for naught because all of the suspects died in unconnected accidents.

On June 9, 1881, Clanton came close to engaging in a shootout with a gambler by the name of “Denny” McCann, but Tombstone marshal Virgil Earp intervened in time.

The Clantons never bothered to register a brand in either Cochise or Pima County, which was required to breed and herd cattle at the time, despite becoming one of the most prosperous ranchers in America. Additionally, The Cowboys, a loose-knit band of outlaws, crossed the border into Mexico and carried livestock that had been stolen into America. Due to the high tariffs, the Mexican government had imposed on border-crossing merchandise, smuggling became a lucrative industry.

Gunfight in Tombstone and its aftermath

On October 25, 1881, after spreading the rumors that Holliday and the Earps were responsible for the Benson stagecoach heist, Ike Clanton also came dangerously near to engaging Holliday in a duel. This one was also stopped by Virgil. On October 26, Clanton was apprehended for breaking into the town while armed. He was sent before Judge Wallace, who fined him $25 plus court fees. Later, the guns that had been taken from him earlier were returned.

Billy Clanton, Frank McLaury, and Tom McLaury arrived in Tombstone a little while later. Each one had a weapon. Wyatt pistol-whipped Tom, and when Frank and Billy saw that the Earps had mistreated their respective brothers, they became furious. The Earps were told by several witnesses that Frank and Billy had been observed purchasing cartridges. Billy Claiborne, a fellow Cowboy with a reputation as a gunfighter, was recruited by Ike.

Despite its name, the gunfight did not take place within or close to the O.K. Corral and started at three in the afternoon. The actual location of the incident was a small lot next to C. S. Fly’s photography studio on Fremont Street, which was six doors west of the O.K. Corral’s back entrance.

Claiborne fled right away when the gunfire started since he didn’t have his firearms with him. Ike continued to drive at Wyatt’s feet while pretending to be unarmed as well. Famously, Wyatt responded, “Go to fighting or flee!” Ike stood up and sprinted into Fly’s house, where he hid until the firing subsided. Frank, Billy, and Tom perished in the tragedy.

Witnesses claimed that despite being granted mercy, Clanton continued to threaten the Holliday and the Earps. He afterward tried to have the Earps and Holliday killed but in vain. He unintentionally aided the defense’s case during the trial with his contradictory testimony. The police officers were then exonerated of all allegations.

After the shooting at Tombstone, Ike Clanton and his brother Phineas continued to rob livestock in Arizona. Detective Jonas V. Brighton, who on June 1, 1887, shot and killed Clanton at Jim Wilson’s Ranch on Eagle Creek, south of Springerville, Arizona, after the suspect resisted arrest and attempted to run into the desert, brought the case against him.

A few weeks later, a journalist who was in contact with Brighton reported that Clanton had had “as nice a burial as circumstances would admit,” despite some reports claiming that his body had been left lying where it had died before being interred by Mormon ranchers in an unmarked grave.
Despite never having children of his own, several of his relatives, including several of his brothers, went on to have a large number of offspring, many of whom now live in Arizona.

There has been a lot written about the Gunfight at the O.K. Corral, including accounts from witnesses who were in Tombstone at the time. Billy Breakenridge, a close friend of Clanton who had worked as Behan’s deputy sheriff, as well as Josephine Earp, Wyatt’s common-law spouse, both published their accounts.

Grant Withers played Clanton in the 1946 classic “My Darling Clementine.” In “Gunfight at the O.K. Corral” (1957), Lyle Bettger played him as a vicious thug, while in “Hour of the Gun,” Robert Ryan depicted him as a very sophisticated character (1987).

Stephen Lang played Clanton in the 1993 Western film “Tombstone,” which starred Kurt Russell as Wyatt Earp and Val Kilmer as Doc Holliday. Clanton was played by actor Jeff Fahey in the Kevin Costner-led film “Wyatt Earp” (1994). Clanton is another character played by William Hurndell in the 1966 “Dr. Who” tale “The Gunfighters.”

The estimated net worth of Ike Clanton is about $1 million.

A family member filed a request in June 1996 to exhume what he believed to be Clanton’s remains, but the request was denied.