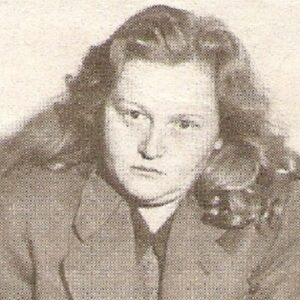 Karl-Otto Koch, the Nazi concentration camp commander in Buchenwald and Majdanek, married Ilse Koch. She was one of the first well-known Nazis to face military trials in the United States. The trial received a lot of media attention. Her husband was well-known for his materialistic greed, but his wife was well-known for her inhuman cruelty toward Jews. Survivors of Nazi concentration camps confirmed she was a sadisctic woman known as “the concentration camp murderess.” She and her husband lived in a mansion on the grounds of the Buchenwald concentration camp. Karl-Otto Koch had built a special horseback arena for his wife’s enjoyment, and she would ride through the camp whipping any prisoners who got in her way. Ilse Koch was a nymphomaniac, and the couple held orgies for Nazi party political soldiers. She enjoyed torturing the inmates by making them perform excruciatingly difficult tasks. She used to collect lampshades, book covers, and gloves made from the tattooed skins of the dead inmates, according to a witness at the Nuremberg Trials. Because of her brutality and libidinousness toward prisoners, the prisoners dubbed her ‘Die Hexe von Buchenwald’ (‘The Witch of Buchenwald’). “The Beast of Buchenwald,” “Queen of Buchenwald,” “Red Witch of Buchenwald,” “Butcher Widow,” and “The Bitch of Buchenwald” are some of her other aliases.

Ilse Koch was born Margaret Ilse Köhler on September 22, 1906, in Dresden, Saxony, Germany, to a factory supervisor and his wife.

Ilse was a happy, carefree child who grew up in a peaceful environment. She enrolled in an accountancy school at the age of 15 and began working as a bookkeeping clerk.

In 1932, she joined the Nazi Party, which was gaining popularity at the time. Karl Otto Koch, the head of the Sachsenhausen concentration camp, was introduced to her by friends in the SA and SS in 1934.

She was involved in a heinous experiment at Buchenwald, where she carried out the murders of tattooed prisoners. Their tattooed skin was retrieved and used to aid Erich Wagner (de), a prison doctor, in his thesis on tattooing and criminality.

She used the money looted from the prison inmates to build an indoor sports arena in 1940. On the orders of Josias von Waldeck-Pyrmont, the SS and Police Leader for Weimar, Buchenwald, she and her husband were arrested on August 24, 1943.

Private fortification, embezzlement, and the murder of potential witnesses were among the charges leveled against the Kochs.

Koch was arraigned in 1947 before the American military court at Dachau (General Military Government Court for the Trial of War Criminals), with Judge Robert L. Kunzig as her prosecutor. “Participating in a criminal plan for aiding, abetting, and participating in the murders at Buchenwald,” she was charged.

She was sentenced to life in captivity on August 19, 1947, for violating the laws and customs of war. General Lucius D. Clay, the provisional military governor of the American Zone in Germany, reduced the sentence to four years in prison on June 8, 1948, after she had served two years in prison due to a lack of evidence.

Ilse Koch was arrested once more in 1949. On November 27, 1950, the trial began in the District Court of Augsburg, West Germany. It was seven weeks long.

Koch collapsed in the courtroom in late December 1950 and had to be carried away on January 11, 1951. Several witnesses testified during the trial that they saw Koch choose the tattooed prisoners who were later killed. The prosecution, however, dropped the charge because they couldn’t prove the lampshades were made of human skin.

The Court issued its decision on January 15, 1951. Koch was charged with murder provocation, attempted murder, and causing great bodily harm. Her civil rights were taken away and she was sentenced to life in prison.

On April 22, 1952, the Federal Court of Justice dismissed her higher appeal. The Bavarian Ministry of Justice and the International Human Rights Commission both rejected all of her pardon petitions.

Karl-Otto Koch and Ilsa Koch married in 1936. She announced her pregnancy in the courtroom during her first trial. It could have been the child of Chief Medical Officer Waldemar Hoven or Deputy Commandant Hermann Florstedt.

The court was taken aback when Koch, 41, announced her pregnancy because she had been kept isolated during that time. She lived with her surviving family in Ludwigsburg after her husband died in April 1945, until her second arrest.

Karl Koch and Ilse Koch had two sons together. Uwe was born in the Aichach prison near Dachau, where Koch was serving a life sentence, and one of them committed suicide after the war.

When Uwe Köhler was 19, he discovered his mother’s identity and traveled to Aichach to see her. Koch committed suicide at the Aichach women’s prison on October 1, 1967. She was 60 years old at the time.

Her body is interred in an unmarked grave in the Aichach cemetery. Koch’s life was portrayed in a number of Nazi exploitation films, as well as the noise music compilation ‘Für Ilse Koch,’ released by the British label Come Organisation in 1982.

Ilse Koch is one of the wealthiest torturers and one of the most well-known torturers. Ilse Koch’s net worth is estimated to be between $1 and $5 million, according to Wikipedia, Forbes, and Business Insider.