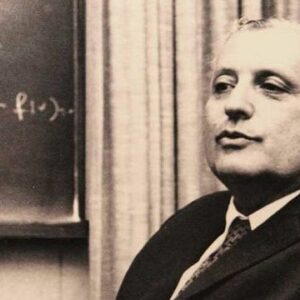 Ilya Prigogine was a Russian-born Belgian physical chemist who won the Nobel Prize for Chemistry in 1977 for his work on non-equilibrium thermodynamics, especially the theory of dissipative structures. He was also known for his work on complicated systems and things that can’t be changed. He was born in Russia just before the Russian Revolution of 1917. When he was a young boy, his family moved to Belgium. He was more interested in history and archaeology when he was in school, but fate made him choose chemistry. After getting his bachelor’s and master’s degrees in chemistry from the Université Libre de Bruxelles, he went into teaching and became a professor at the same school where he got his degrees. After World War II, he did important research in chemistry and came up with mathematical models that showed how chemical reactions could make patterns that changed over time. He called these patterns “dissipative structures.” He won the Nobel Prize for his work on how these structures work in thermodynamic systems that are far from equilibrium. He is also thought to have worked with Robert Herman to come up with the idea for the two fluid models. In the later part of his career, he studied the role of indeterminism in both classical and quantum nonlinear systems.

Ilya Romanovich Prigogine was born on January 25, 1917, in Moscow, Russian Empire. His father was a chemical engineer named Roman (Ruvim Abramovich) Prigogine, and his mother was a pianist named Yulia Vikhman. He only had one sibling.

When he was a small child, the Russian Revolution of 1917 began. His family didn’t like the new Soviet system very much, so they left Russia in 1921. They went to Germany first, and in 1929, they moved to Belgium.

When Prigogine was a young boy, he liked music, history, and archaeology. But he chose to study science in school and got his bachelor’s and master’s degrees in chemistry from the Université Libre de Bruxelles. In 1941, he got his doctorate.

Ilya Prigogine became a professor at Université Libre de Bruxelles, where he had studied before, in 1950. During his successful academic career, he moved up quickly. In 1959, he became the director of the International Solvay Institute in Brussels.

From 1961 to 1966, he was a part of the Enrico Fermi Institute at the University of Chicago. In 1962, he became the head of the International Institute of Physics and Chemistry in Solvay.

In 1967, he helped start the Center for Thermodynamics and Statistical Mechanics in Austin, Texas. It is now called the Center for Complex Quantum Systems. After World War II, he did a lot of research, and in the 1960s, he made a lot of important discoveries.

With the help of his coworkers R. Balescu, R. Brout, F. Hénin, and P. Résibois, he came up with non-equilibrium statistical mechanics and mathematical models that showed how chemical reactions could create patterns that were both complex and constantly changing.

Prigogine’s work on how to apply the second law of thermodynamics to complex systems, such as living things, was very important. The law says that in any physically isolated system, order always gives way to disorder. But Prigogine thought that nonlinear systems (also called dissipative structures) can go through times of instability and then self-organize as long as they get energy and matter from outside sources.

His groundbreaking work on dissipative structure theory had an impact on many different fields, from physical chemistry to biology. It also made it possible for the fields of chaos theory and complexity theory to grow. It also led to philosophical questions about how biological things get to be so complicated.

Toward the end of his career, he focused on the fundamental role of indeterminism in both classical and quantum nonlinear systems. He and his colleagues came up with the idea of extending quantum mechanics into Liouville space.

Ilya Prigogine wrote or co-wrote 20 books, including several with Isabelle Stengers, and almost 1,000 research articles. One of his best-known books is “La Fin des certitudes,” which he wrote with Isabelle Stengers in 1996 and was translated into English as “The End of Certainty: Time, Chaos, and the New Laws of Nature” in 1997.

In 1997, he helped start the International Commission on Distance Education (CODE), which is a worldwide agency for accrediting schools.

Ilya Prigogine is best known for his work on dissipative structures. He came up with the term for these structures when he was working on them in the late 1960s. These structures were seen in physical chemistry experiments. Everyday things like convection, turbulent flow, cyclones, hurricanes, and living things all have these kinds of structures.

He won the Francqui Prize for Precise Sciences in 1955.
In 1976, he got the Rumford Medal for his work on thermodynamics that can’t be changed.

The Nobel Prize in Chemistry was given to Ilya Prigogine in 1977 “for his contributions to non-equilibrium thermodynamics, especially the theory of dissipative structures.”
In 1989, the King of the Belgians gave him the title of Viscount in the Belgian upper class.

Ilya Prigogine got married for the first time to the Belgian poet Hélène Jofé. They had a son together. The two people got a divorce.
In 1961, he married a Polish chemist named Maria Prokopowicz. This marriage also gave birth to a son.

Ilya is one of the wealthiest and most well-known physicists. Based on what we know and what Wikipedia, Forbes, and Business Insider say, Ilya Prigogine is worth about $1.5 million.