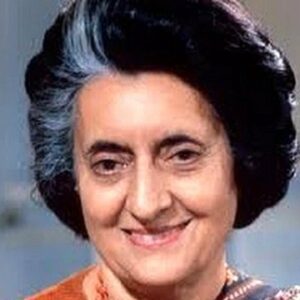 Indira Gandhi, dubbed the “Iron Lady of India,” gained a strong reputation as a stateswoman around the world. Her political savvy and outstanding abilities propelled her to prominence in Indian politics, and she went on to become the first woman elected to head a democratic country. She is the only woman to have ever held the position in India. Indira Gandhi had learnt the tricks of the trade early in her life, having been born into a politically powerful dynasty and growing up in a difficult political environment. Following her father’s death, she developed an authoritarian streak and became the face of the ‘Indian National Congress’ party. She was recognized for her brutal political ruthlessness and unprecedented power concentration. During her presidency, India rose to prominence as a regional force in South Asia, with significant political, economic, and military significance. She also oversaw a state of emergency and made significant modifications to India’s constitution. She employed the army to resolve various internal conflicts and promoted a culture of sycophancy and cronyism, which irritated many Indians. Gandhi launched ‘Operation Blue Star,’ which gained her notoriety and eventually led to her killing.

Indira Gandhi was born Indira Priyadarshini Nehru to Jawaharlal Nehru and Kamala Nehru on November 19, 1917, in Allahabad, British India. Jawaharlal Nehru will subsequently become India’s first prime minister after independence. Indira was her parents’ sole child after her younger brother died in infancy.
Unlike many others, she did not have a pleasant childhood. Her father was usually out from home due to his political obligations, and her mother was prone to illness.

She acquired her primary education at home before attending school for a brief while to complete her matriculation. She studied at Santiniketan’s ‘Vishwa Bharati’ but had to withdraw out a year later due to her mother’s failing health in Europe.

Indira went to the ‘University of Oxford’ in Britain after her mother died, where she studied history, political science, and economics. She returned to India without a degree, however, due to her chronic ill health.
On September 26, 1981, Indira received an Honorary Doctorate from the ‘University of the South Pacific’ in Fiji.

Indira Gandhi was elected to the ‘Rajya Sabha’ following the death of her father in 1964. She also served as the Minister of Information and Broadcasting in Lal Bahadur Shastri’s cabinet.
Following Lal Bahadur Shastri’s tragic death, a number of candidates vied for the office of Prime Minister. Indira Gandhi was picked as the compromised candidate as a result of the inability to reach a consensus. In January 1966, she was elected Prime Minister of India.

India’s Prime Minister, Indira Gandhi, remained in office until 1977. She demonstrated great political skills as Prime Minister. Many prominent members of Congress were pushed out of the party and out of power as a result of her efforts. Internal dissension in the party resulted in the ‘Indian National Congress’ splitting in 1969.

In his capacity as Prime Minister

During Gandhi’s tenure as Prime Minister, the country’s economic, political, international, and national policies were drastically altered. She was in charge of the implementation of three five-year plans, two of which were successful in achieving the desired growth.

One of her most important actions was to nationalize 14 major commercial banks. The initiative paid off, as the number of bank branches increased from 8200 to 62000, increasing the geographical coverage of the banks. In addition, bank nationalization raised household savings and led to increased investment in small and medium-sized businesses and the agricultural sector.

The coal, steel, copper, refining, cotton textiles, and insurance sectors were then nationalized by her. The primary goal of this action was to defend jobs and the interests of organized labor. She brought the private sector industries under stringent regulatory oversight.

During Gandhi’s presidency, the ‘Green Revolution’ brought about significant changes in India’s agricultural production. She changed the country’s trajectory, transforming it from an import-dependent nation to one capable of meeting a significant amount of its needs through domestic production. She primarily focused on long-term stability and gradual self-sufficiency.

In 1971, Gandhi backed East Pakistan in the ‘Pakistan Civil War,’ which resulted in Bangladesh’s establishment. This aided India’s efforts to bring the Himalayan republics under its control. While Nepal and Bhutan remained India’s allies, Sikkim became an Indian state in 1975 after a vote.

Meghalaya, Manipur, Tripura, Haryana, Punjab, and Himachal Pradesh were accorded statehood under Gandhi’s administrative philosophy. Chandigarh and Arunachal Pradesh were both designated as union territories.
While Indira Gandhi had close ties to the Soviet Union, she had a troubled relationship with the United States. She also maintained tight ties with Bangladesh during her presidency, which lasted until 1975. The relationship between India and Bangladesh deteriorated after the assassination of Bangladesh Prime Minister Shiekh Mujibur Rahman.
Gandhi worked hard to improve relations and reopen diplomatic missions between India and Pakistan during her time as Prime Minister. Despite Zulfikar Ali Bhutto’s agreement, General Zia-ul-ascension Haq’s to power in Pakistan in 1978 derailed all efforts to improve relations between the two countries.

Due to Gandhi’s pro-Soviet stance and ASEAN’s pro-American stance, her relations with Southeast Asian countries were strained. Following Gandhi’s backing of the ZOPFAN proclamation and the breakdown of the SEATO alliance, her relationship with Southeast Asian countries was resurrected, but it did not do much to enhance the relationships.
Gandhi also introduced social changes by including wage articles in the Indian Constitution, ensuring equal compensation for equal work for men and women.

Elections in 1977: State of Emergency and Loss

The opposing parties accused her of using illegal techniques and electoral fraud to win the elections in 1971. A case was launched in the Allahabad High Court as a result of this, and Gandhi was found guilty of utilizing state apparatus for electoral campaigning.

The elections were deemed null and illegal by the court in June 1975, and Indira Gandhi was removed from the ‘Lok Sabha.’ She was also barred from competing for the following six years.

India was going through a difficult period. Drought and oil difficulties plagued the country as it recovered from its war with Pakistan. Strikes and political rallies exacerbated the problems by disrupting the economy and causing chaos across the country. Gandhi encouraged President Fakhruddin Ali Ahmed to proclaim a state of emergency to put a stop to it.

From June 1975 to March 1977, India was in a state of emergency for 21 months. It gave Gandhi the right to rule by decree, suspending elections and all civil liberties in the process. The central government took control of the entire country.

All publications were censored by the Ministry of Information and Broadcasting during the emergency. As a result, no one could speak out against the government’s actions.

Before the elections in March 1977, Gandhi prolonged the state of emergency twice. ‘The Janata Party,’ led by Moraji Desai and Jai Prakash Narayan, made a public appeal to the people, claiming that this was the last chance to choose between democracy and dictatorship.

The election result did not come as a surprise. The ‘Congress Party’ was soundly beaten, obtaining only 153 seats. Indira Gandhi and her son Sanjay Gandhi both lost their seats in Congress.
Indira Gandhi and Sanjay Gandhi were arrested by the ‘Janata Party,’ led by Moraji Desai, on suspicion of plotting to kill opposition leaders during the emergency. The move, however, was in vain because none of the allegations were proven. In addition, Indira Gandhi received widespread support.

Except for their shared antipathy of Indira Gandhi, the leaders of the ‘Janata Party’ had little in common. As a result, the government was ineffective. Desai stepped down as prime minister as a result of the ‘Janata Party’ split, and Charan Singh was appointed as his replacement. However, this did not last long, and in the winter session of 1979, the Parliament was dissolved, and elections were called for 1980.

Prime Minister for a Second Term

During Indira Gandhi’s second tenure as Prime Minister, she spent the majority of her time handling the political problems in Punjab. Jarnail Singh Bhindranwale, along with his troops, had launched a separatist movement from the Golden Temple, the Sikhs’ holiest shrine.
Bhindranwale had begun a campaign against the government, moderate Sikhs, and Hindus with the help of his supporters.

Gandhi launched ‘Operation Blue Star’ to prevent Bhindranwale from obtaining power. The operation’s major goal was to clear the terrorists from the Golden Temple’s precinct and capture Bhindranwale and his soldiers. Although ‘Operation Blue Star’ was successful in subduing Bhindarwale and his team, it resulted in the deaths of several bystanders and the regrettable damage to the shrine. Gandhi incurred the enmity of the Sikhs, who declared Bhindranwale a martyr of the twenty-first century as a result of this.

Indira and Feroze Gandhi had known one other since infancy, and their friendship grew into a relationship when they were studying in the United Kingdom. They married in March 1942 and had two sons, Rajiv Gandhi and Sanjay Gandhi, as a result of their union.
Two of her Sikh bodyguards, profoundly offended by the insult showered upon the Sikh, shot her to death in order to avenge the insult.

Despite being brought to the ‘All India Institute of Medical Sciences,’ where doctors attempted to resuscitate her, Gandhi died and was certified dead. She was cremated near Raj Ghat, which has since been renamed ‘Shakti Sthal.’ Her funeral was shown live on a number of domestic and international television networks.

The central government developed a low-cost housing scheme for the rural poor in an attempt to honor and pay tribute to the great political leader. ‘Indira Awaas Yojana,’ the program, was named after her.
In her honor, the international airport in New Delhi is known as ‘Indira Gandhi International Airport.’ ‘Indira Gandhi National Open University,’ one of the world’s largest universities, is named after her.
The ‘Indian National Congress’ created and founded the ‘Indira Gandhi Award for National Integration,’ an annual award given to persons who support national integration, in 1985.

In a poll conducted by ‘India Today,’ she was chosen the greatest Indian Prime Minister. In a survey conducted by the ‘BBC’ in 1999, she was also voted ‘Woman of the Millennium.’
Gandhi received an honorary degree from the University of Oxford. She was also chosen as one of ten Oxasians (distinguished Asian graduates) from the ‘University of Oxford.’

Bangladesh’s government honored Gandhi with the country’s highest state honor for her “exceptional contribution” to the country’s independence.

In June 1975, she declared a ‘State of Emergency’ in India, which lasted for 21 months until March 1977. During the emergency, she ruled by decree, bringing the entire country under the control of the central government.
She launched ‘Operation Blue Star’ to clear the Golden Temple precinct of the terrorists who were supporting Bhindranwale. Her assassination was the result of this.

She participated in India’s war for independence as a young girl by creating a ‘Monkey Brigade,’ which spied on police and distributed flags.
She was imprisoned by the British for 13 months in 1942 for her role in anti-British nationalist political demonstrations.

Her father, Jawaharlal Nehru, was a staunch opponent of her marriage to Feroze Gandhi, but she bravely went ahead and married him despite the opposition.

There is no relationship between Mahatma Gandhi and Indira Gandhi, contrary to common belief.
Indira Gandhi is claimed to have had numerous love romances during her lifetime. Indira Nehru Gandhi’s first love affair, according to Katherine Frank’s book “The Life of Indira Nehru Gandhi,” was with her German instructor at Shantiniketan. M. O. Mathai (Jawaharlal Nehru’s secretary), Dhirendra Brahmachari (her yoga teacher), and Dinesh Singh, a Congress official who subsequently served as India’s Foreign Minister, were among her later lovers.
Indira Gandhi was elected President of the Congress in 1959, while her father was Prime Minister of India.

She was the world’s second female head of government, following Sri Lanka’s Sirimavo Bandaranaike.
Yasser Arafat, the Palestinian leader with whom she had personal contacts, wept profoundly at her funeral.
Raj Kapoor, Sunil Dutt, and Amitabh Bachchan were among the Bollywood stars who attended Indira Gandhi’s funeral.