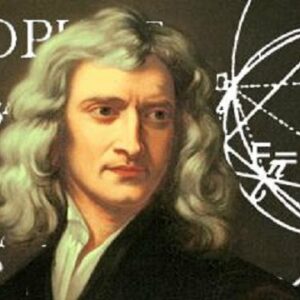 Sir Isaac Newton is widely regarded as the best and most influential scientist of all time. He was a brilliant physicist, mathematician, astronomer, and alchemist. He discovered the principles of modern physics, which he put out in his work, ‘Philosophiae, Naturalis, Principia Mathematica,’ one of the most important contributors to the 17th century’Scientific Revolution.’ The work, known as ‘Principia,’ emphasized universal gravitation and laws of motion, which have been at the forefront of scientific thought for centuries. In addition, he researched on and improved color theory. He was the first to demonstrate that color is an inherent characteristic of light, and that a white light decomposes into multiple hues when reflected, scattered, or transmitted, as seen in the spectrum or the rainbow. He was the one who designed and built the first workable telescope. Newton also made contributions to the study of power series, extended the binomial theorem to non-integer exponents, and devised a method for approximating a function’s roots. Aside from the aforementioned, Newton made notable and significant contributions to alchemy and theology. He had a number of important posts throughout his life. He was the Warden and Master of the Mint, as well as the Lucasian Professor of Mathematics and the president of the ‘Royal Society.’ It’s fair to say that Newton, on his alone, lay the foundation for subsequent discoveries by scientists all around the world.

Isaac Newton was born in Woolsthorpe Manor, England, on January 4, 1643, to Hannah Ayscough and Isaac Newton Sr. His father passed away three months before he was born. Hannah remarried Reverend Barnabas Smith, leaving Newton with his maternal grandmother, Margery Ayscough, at the age of three.
Newton obtained his primary education at Grantham’s ‘The King’s School,’ where he excelled and graduated with honors. In 1661, he began his studies as a sizar at Cambridge’s ‘Trinity College.’
Newton developed an interest in physics, mathematics, optics, and astronomy throughout his time at Cambridge. He developed an interest in advanced science and spent his time reading books by modern thinkers despite being taught a traditional curriculum.
The institution was closed for two years in 1665 due to a plague pandemic, which Newton spent at his home at Woolsthorpe. He, on the other hand, did not abandon his studies and pursued them in private.
Newton focused on the development of his theories on calculus, optics, and the law of gravitation during these two years away from normal academics. He even developed the modified binomial theorem and began to construct infinitesimal calculus as a mathematical theory.
Newton made significant contributions to the discipline of mathematics, advancing every branch of the science at the time. In 1666, he wrote a manuscript on fluxions or calculus, which was later published with his mathematical writings.
His solution to the contemporary issues of drawing tangents to curves (differentiation) and defining regions limited by curves (integration) in analytical geometry catapulted him into the spotlight. The difficulties were revealed to be the inverse of one another by Newton.
Through his method of fluxions and inverse method of fluxions, which are now known as ‘differentiation’ and ‘integration calculus,’ he also established universal methods for resolving curvature problems. Unlike Leibniz, who expressed calculus algebraically, Newton expressed it using both algebra and geometry.
Newton is also credited with the generalized binomial theorem. ‘Newton’s identities,’ ‘Newton’s technique,’ and the classification of ‘cubic plane curves’ were all inventions of his.
Newton contributed significantly to the theory of finite differences. To solve ‘Diophantine equations,’ he was the first to use fractional indices and coordinate geometry.
In 1667, he returned to Cambridge and was named a Trinity fellow. He was asked to become an ordained priest as a Trinity fellow. However, because of his unusual viewpoints, he was able to dodge it.
Newton postponed the ordination indefinitely, but he was unable to do so since he was elected to the coveted Lucasian Chair in 1669, an office that required ordination. He was able to evade ordination by obtaining special authorization from Charles II.

Newton had to tutor students as part of his job as a professor. However, his special license granted him a privilege, requiring him to give an annual course of lecture on his work in optics.
Over the course of several years, Newton investigated the refraction of light by a glass prism as part of his optics research. Newton discovered and concluded that color is an intrinsic characteristic of light and that light is made up of particles after years of complex, refined, and accurate tests.
White light, according to Newton, is a blend of infinitely diverse colored beams, some of which can be seen in the rainbow and spectrum. He also discovered that the bending of white light into a multi-colored spectrum created by a prism could be recomposed to white light using a lens and a second prism. He even discovered that when white light is refracted to generate colored light, its qualities do not change.
He came to the conclusion that color is the consequence of objects interacting with white light, not the objects themselves. Newton’s theory of color was later named after him. In 1668, Newton developed a telescope known as the ‘Newtonian telescope’ to establish his theory.
‘Opticks: A Treatise of the Reflections, Refractions, Inflexions, and Colors of Light,’ published in 1704, was Newton’s first published book on light, optics, and color. His work, on the other hand, did not appeal to everyone at the ‘Royal Society,’ especially Robert Hooke, with whom he had a tense relationship throughout.
Newton was unable to take the criticism well, and he insisted that his work was without flaws. Following that, he suffered from a psychological breakdown, which worsened after his mother died in 1679.
Newton took a six-year vacation during which he avoided all forms of intellectual correspondence. During this time, he continued to work on his theory of gravitation and its effects, which he had begun during his time away from Cambridge owing to the epidemic.
Newton understood that the motion of the Moon, the fall of an apple from a tree, and the relationship between a pendulum and a sling are all determined by a same force.
He established that the elliptical geometry of planetary orbit would emerge from a centripetal force inversely proportional to the square of the radius vector, based on Hooke’s theory. Newton began working on his theory of mechanics and gravitation after being encouraged to do so mathematically and paid for it. He published his book ‘Philosophiae, Naturalis, Principia Mathematica’ in 1687.
The first edition of the book, dubbed ‘Principia,’ set the groundwork for the science of mechanics. The motions of the heavenly bodies are controlled by gravitational force, according to Newton.
He was also the one who devised the three laws of motion. The first law states that unless an external force is applied to a stationary body, it will remain stationary. The second law states that force equals mass times acceleration, and that a change in motion is proportionate to the force exerted, while the third law states that there is an equal and opposite reaction to every action.
Though Hooke claimed that his work was plagiarized, the case was dismissed since most scientists acknowledged that Hooke had merely theorized the concept.

The publication of ‘Principia’ boosted Newton’s reputation to new heights. He was well-known for his groundbreaking discoveries, which were considered among humanity’s greatest achievements.
Newton’s growing popularity and notoriety prompted him to pursue interests in other fields, causing him to become increasingly involved in public life. His position at Cambridge no longer piqued his interest, as he was drawn to other topics. Newton was then elected to the Parliament to represent Cambridge.
Newton’s circle grew during the next few years, and he became friends with political theorists like John Locke. A youthful generation of British scientists became affected by Newton’s writings and thought of him as their leader while the globe was still under the jurisdiction of Aristotelian philosophy and concept of nature.
During this time, Newton had another nervous breakdown, but he was able to recover quickly. Following his breakdown, however, he lost interest in scientific findings and began to devote his attention to the study of alchemy and prophesy.

Newton was named Warden of the Mint in 1696. He then relocated to London to take up this long-awaited government position. He rose to the position of Master of the Mint in 1699. Newton worked on improving the status of currency until his death, and he held the position until his death. He even changed the currency’s gold standard from silver to gold.

Appointment The Royal Society is a prestigious institution.

In 1703, Newton was elected president of the ‘Royal Society’ after Robert Hooke died. His years as president, however, were marred by scandal and despotism.
Newton was knighted by Queen Anne in 1705. After Sir Francis Bacon, he became the second scientist to be knighted. Many people, however, saw Newton’s knighthood as a product of his political ambitions rather than his scientific achievements or service as Master of the Mint.
Gottfried Leibniz accused Newton of plagiarizing his findings in 1705. Leibniz claimed to have discovered infinitesimal calculus long before the publication of his ‘Principia.’ Leibniz was ruled a fraud after an investigation into the topic.
Another example of Newton’s tyranny during his reign of terror is his premature publication of John Flamsteed’s works without his permission. The incident intensified when Flamsteed refused to give Newton his notes, which he needed for his revision of ‘Principia.’

Newton’s personal life was far from flawless, despite his outstanding professional life. He struggled with feelings of insecurity and pride. He was even afflicted with mental illness.
Newton spent his latter years with his niece and her husband at Cranbury Park in Winchester, England. Due to his scientific findings, he had gained a lot of notoriety as well as a lot of money.
Newton passed away on March 31, 1727, after suffering from severe abdominal agony. Webminster Abbey was the final resting place for his mortal bones. Newton was declared the greatest scientist or genius of all time after his death. He was compared to Aristotle, Plato, and Galileo, among others. At the entrance to Webminster Abbey, there is a memorial to him known as ‘Newton’s monument.’ It also highlights the clever scientist’s achievements and pays homage to his dazzling discoveries.
An image of Newton appeared on ‘Series D’1’ banknotes issued by the ‘Bank of England’ for almost a decade, from 1978 to 1988. He was shown clutching a book in the shot. By his side was a telescope, a prism, and a map of the Solar System.
A statue of Isaac Newton stands at the ‘Oxford University Museum of Natural History,’ looking at an apple at his feet. In addition, a massive bronze statue of Newton stands in the plaza of London’s ‘British Library.’

The falling of an apple from a tree is claimed to have prompted this great scientist to investigate the cause of the action, which led to the discovery of gravitational force.
He wrote the book Philosophiae Naturalis Mathematica, which is widely regarded as one of the most important works in scientific history. He explained universal gravity as well as the three laws of motion in it.