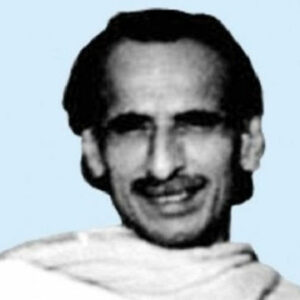 More Facts of J. B. Kripalani

A skilled politician and socialist who made significant contributions both before and after Indian independence were Acharya J. B. Kripalani. He was an advocate of Gandhi’s philosophy and ideology and an ardent follower of Gandhi. While Kripalani made significant contributions to the freedom fight and its aftermath, his role as president of the Indian National Congress during the contentious year of 1947 is what made him most famous. After beginning his profession as a teacher and educationist, Kripalani soon left it behind to join the independence movement. He actively participated in the Civil Disobedience Movement, Gandhi’s Non-Cooperation Movement, Salt Satyagraha, and the Quit India Movement. He actively participated in Congress as a member and activist before leaving to found the Kisan Mazdoor Praja Party, which later changed its name to the Praja Socialist Party.

On November 11, 1888, in Hyderabad, Sind, J. B. Kripalani was born as Jivatram Bhagwandas Kripalani into a Hindu Kshatriya Amil household to Kaka Bhagwandas. His father was employed by the government as a revenue and judicial officer. He was the sixth child born to his parents, who had eight total children.

Before transferring to Wilson College Bombay for his higher education, young Kripalani finished his foundational education at a local school in Sindh. He discovered his preference for English poetry there. Interestingly, he later disliked English rulers in a similar way to how much he admired English poetry back then.

He got active in the student-led rebellion during Bengal’s partition while still a college student. He was forced to transfer to D. J. Sind College in Karachi by the college administration in search of a peaceful environment.

For the young and passionate Kripalani, who could not keep himself away from the chaos and instability, life in Karachi was no different. He actively took part in political activity when the college principal made a disparaging comment, which led to his expulsion from the institution.

Later, he relocated to Fergusson College in Poona, where he received his diploma in 1908. He continued his education after that and eventually earned an MA in History and Economics.

After completing his schooling, he decided to pursue a career in education and began working as an English and History Professor at Muzaffarpur College in Bihar. From 1912 to 1917, he continued to work in the profile for five years.

During the Champaran Satyagraha in 1917, he met Gandhiji again, and that encounter proved to be a turning point in his life. He was so greatly moved by the latter’s ideals that he became active in the Indian National Congress.

He dedicated himself to the Non-Cooperation Movement at the beginning of the 1920s. After his time at the ashrams in Gujarat and Bombay, he proceeded to North India and began instructing and setting up new ashrams in Bihar and United Province that were committed to Gandhian ideals and values.

He actively participated in the Civil Disobedience Movement, the Quit India Movement, and the Salt Satyagraha, for which he was repeatedly detained and imprisoned. His publication of seditious remarks critical of the British government also led to his imprisonment.

He participated actively in both the Indian Constituent Assembly and the interim government that oversaw India from 1946 to 1947.

He was elected to the position of Congress President in 1946 despite his views being at odds with the right and left wings of the Congress, which were led by Vallahbhai Patel and Jawaharlal Nehru, respectively. Through the important period of division and independence, he led the party.

He resigned in November 1947 after having disagreements with several of his colleagues on the relative importance of the Congress’ organizational and parliamentary wings. Nehru and Patel were opposed to the organizational wing’s dominance, although Kriplani supported it. Dr. Rajendra Prasad took over as Congress President after him.

Despite their disagreements on the leadership and standing of the government, Nehru steadfastly backed Kripalani in the 1950 Congress presidential elections, where he ran against Patel’s choice, Purushottam Das Tandon. He was defeated by Tandon in the election, which was quite depressing.

After his defeat, he resigned from the Congress party and joined the founding members of the Kisan Mazdoor Praja Party, a brand-new political organization. Later, it amalgamated with the Socialist Party of India to become the Praja Socialist Party.

He introduced the first no-confidence resolution in the Lok Sabha in 1963, right after the disastrous conclusion of the India-China War.

He eventually stopped his parliamentary career after losing the 1971 parliamentary elections and transitioned to become a spiritual leader. He devoted the decade of the 1970s to preserving and conserving the environment.

He spoke out against Indira Gandhi’s autocratic regime in 1972, claiming that it had changed from democratic to dictatorial. He organized peaceful demonstrations against her government around the nation and even started a civil disobedience movement against Gandhi’s administration. Due to this, he was appropriately detained and locked up after the Emergency was declared on June 26, 1975.

After the state of emergency was declared, he saw the Janata Party win the 1977 legislative elections, ushering in the first non-Congress administration since the Declaration of Independence.

He first met Sucheta through her cousin, who served as the Secretary of the Gandhi Ashram in Benares, which he had founded, and they got married in 1936. Sucheta was a teacher in the Women’s College at the Benaras Hindu University.

Unlike him, his wife stayed a committed member of Congress and gave the Party her lifelong service. She held a number of posts with several Central ministries during her political career. She became Uttar Pradesh’s first woman to hold the office of Chief Minister.

On March 19, 1982, he passed away at the age of 94.
He wrote his autobiography, “My Times,” which Rupa publishers released posthumously in 2004—22 years after his passing.

He acquired the moniker Acharya, which stuck with him for the remainder of his life while working at the Gujarat Vidyapeeth. Unlike him, his wife was devoted to Congress and spent her entire life working for the organization.

It’s interesting to note that the two Kripalanis frequently sparred at the Parliamentary sessions after he left Congress.
Acharya Kripalani and famed Indian liberation fighter Maulana Azad have the same birthday.