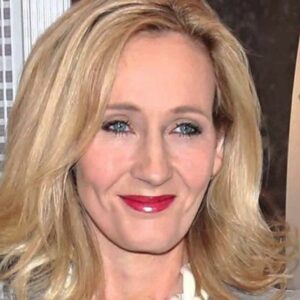 In her wildest fantasies, she never imagined that a delayed train ride from Manchester to London would change her life forever! J K Rowling, sometimes known as Joanne Rowling, is the creator of the Harry Potter series and one of today’s best-selling novelists. Rowling’s biography is a classic rags to riches tale: from living on welfare to being a multi-millionaire author, her life underwent a complete 180 degree swing when the first book of her long-awaited fantasy, ‘Harry Potter and the Philosopher’s Stone,’ appeared on the shelves. Even the most ardent readers were enthralled by the bespectacled boy’s antics and the beautiful depiction of the magic world. And thus began Harry Potter’s and his creator’s trip, which led both the character and the author to the pinnacle of fame and popularity, via King’s Cross station! The Harry Potter series, which consists of seven novels and eight films, is now the best-selling and highest-grossing film series in history, with a total value of billions of dollars.

J.K. Rowling was born Joanne Rowling in Yate, Gloucestershire, England, to James and Anne Rowling. Just a month before Joanne’s second birthday, her parents welcomed a second daughter, Dianne.
She attended St Michael’s Primary School before enrolling at Wyedean School and College, where she excelled academically. She enrolled at the University of Exeter for a BA in French and Classics to improve her education.
Her first attempt at creating fiction stories began when she was five years old, with the story ‘Rabbit’ being her first. She has continued to write novels since then, pursuing her passion for writing.
After graduating in 1986, she relocated to London and began working for Amnesty International as a researcher and bilingual secretary. Meanwhile, she wrote a brief piece titled ‘What was the Name of That Nymph Again? or Greek and Roman Studies Recalled’ for the University of Exeter’s journal Pegasus.

A bold concept envisioned and caught her heart and mind like never before while she was traveling from Manchester to London, and she moved on to dream a little more, eventually constructing the caricature of the bespectacled youngster Harry Potter and his pranks. She was so taken aback by the adrenaline rush she had when she saw the wizardry youngster and his universe that she didn’t waste time writing down her thoughts and instead focused on formulating a more concrete notion. She began writing ‘Philosopher’s Stone,’ the first book in the Harry Potter series, that same evening.

Due to a gap in the teaching profession, she relocated to Portugal, where she spent the night teaching English. She assimilated notions and wrote the first three chapters of her novel during the day.
She relocated to Scotland in 1993 to be closer to her sister Dianne, who was going through a difficult time in her life. She encouraged herself to write because it was the only interest she had left. She was in a big crisis position with no employment and a disrupted personal life.

In 1995, she finished the manuscript for ‘Harry Potter and the Philosopher’s Stone,’ a renowned book. After receiving rejections from approximately a dozen publishers, editor, she finally received approval from Bloomsbury’s Barry Cunningham.

Meanwhile, she enrolled in a teacher training programme at Edinburgh University’s Moray House School of Education in order to support herself financially. The initial edition of the book was printed in 1,000 copies, with 500 copies going to libraries. Her application for an £8000 grant from the Scottish Arts Council was aided by the phenomenal success of the first book in the Harry Potter series. She also made money by selling the rights to publish the book in the United States to Scholastic Inc. She moved to a flat in Edinburg and engaged herself even more in the book, chronicling Harry Potter’s life, his school Hogwarts School of Witchcraft and Wizardry, and his companions, the knotty Hermione Granger and the befuddled Ron Weasley.
In 1998, she published ‘Harry Potter and the Chamber of Secrets,’ the sequel to the book. The book, like its predecessor, was enthusiastically reviewed and enthralled the audience, leaving them hungry for more.

The wait was short, as she released ‘Harry Potter and the Prisoner of Azkaban,’ the third novel in the series, in 1999. The three of the seven book series had had grossed $480 million by the summer of 2000, with over 35 million copies in print in 35 languages.

The Harry Potter series’ mania and fandom had grown to the point where she had to withdraw the fourth book from consideration in order to give the other volumes a fair opportunity.
Meanwhile, the Harry Potter series has become the most profitable franchise for filmmakers due to its enormous success. As a result of the success of her written works, Warner Bros. struck a deal with her to produce a film adaptation of them.

‘Harry Potter and the Goblet of Fire,’ her fourth book, was released on July 8, 2000. The book shattered all previous records and established new ones in the world of fiction. In its first day, it sold as many copies as ‘Prisoners of Azkaban’ did in its first year!

In the year 2009, the film ‘Harry Potter and the Half-Blood Prince’ was released. The final book in the series was split into two parts. The first installment was released in November 2010, while the second and final installment was released in 2011. She took a break from writing after the phenomenal success of the Harry Potter series, only to return in 2012 with the adult novel ‘The Casual Vacancy.’ The novel, a dark comedy about a local election in the small English town of Pagford, earned mixed reviews but sold over a million copies in its first three weeks.
She created the website Pottermore in 2012, which contained previously unreleased information about characters, places, and artifacts from the Harry Potter universe. She also began working on the Harry Potter encyclopaedia, writing different unpublished comments and resources.

Under the alias Robert Galbraith, she published another adult novel, ‘The Cuckoo’s Calling,’ in 2013. It was initially met with skepticism when it was published as a crime detective novel. However, when it was revealed that Rowling was the genuine author, sales skyrocketed by 4000 percent. She is currently said to be working on two types of novels, one for youngsters and the other for adults. The children’s work is intended towards a younger audience than Harry Potter fans.

The Harry Potter franchise is now believed to be worth $15 billion. It is a global brand that has set world records in literary circles and is still the most popular fiction story. The series’ final four novels have shattered all sales records, with the most recent selling a record-breaking 11 million copies on its first day of release in the UK and the US. Her books have been translated into 65 languages, making her the best-selling novelist in the United Kingdom, with projected sales of £238 million and higher.

On October 16, 1992, she married Jorge Arantes, a Portuguese journalist. They were blessed with a baby girl the next year. However, they did not stay together for long and divorced on November 17, 1993. In August of 1994, she filed for divorce. She married Neil Michael Murray, a practicing anesthesiologist, for the second time in 2001. A son, David Gordon Rowling Murray, and a daughter, Mackenzie Jean Rowling Murray, were born to the marriage.
She is a well-known philanthropist who has donated to organizations like Comic Relief, One Parent Families, the Multiple Sclerosis Society of Great Britain, and Lumos.

J.K Rowling has a net worth of $1 billion dollars.

During the publication of the first Harry Potter novel, the publisher requested that she use her initials rather than her full name to avoid any gender bias.