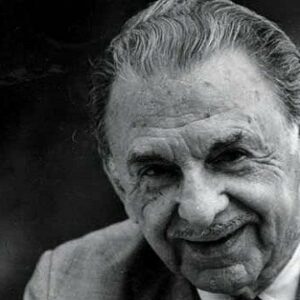 Jehangir Ratanji Dadabhoy Tata, popularly known as J.R.D.Tata, was a daring aviator and a visionary ahead of his time who built the Tata Group into one of India’s most prominent and profitable industrial conglomerates. Tata had an ideal upbringing in France, where he was born to an Indian father and a French mother. His family was wealthy, and he had the resources to satisfy his young mind’s curiosity. He started his career as an unpaid apprentice at Tata & Sons in India and progressed through the ranks to become Chairman of the company within a few years. He had been interested by aviation since he was a child and had taken up flying. He was an ardent aviator and was the first person in India to receive a pilot’s license. He expanded his love of flying by founding India’s first commercial airline, Tata Airlines, which subsequently became Air India. The Tata Group expanded into new realms under his adept leadership and direction, and became one of India’s most trusted companies. His never-ending efforts to improve the world garnered him a number of important accolades.

In 1904, he was born in Paris, France, as the second child of an Indian father and a French mother. He had two younger brothers and one older sister.

He grew up in France and attended the Paris-based Janson De Sailly School. He also served in the French Foreign Legion, which is the French Army’s only foreign military organization.

He was born into a well-to-do family and received his education in France, Japan, and India. In Bombay, he attended the Cathedral and the John Connon School.

He moved to England in 1923 to pursue higher education and enrolled in a crammer school. A statute in France at the time obliged all young males to serve in the army for at least one year.

He began his military career as a member of the Squadron of the French Army’s Le Saphis unit. Tata was well educated and knew able to speak, read, and type in both French and English, which helped him land a job as a secretary in the colonel’s office.

He intended to proceed to Cambridge for further education after finishing his one year of compulsory service in the French Army, but fate had other ideas for him.

His father, who worked for the Tata Company in India, wished for his son to follow in his footsteps. In 1925, he began working for Tata & Sons as an unpaid apprentice.

Tata had a passion for flying since he was a child, and was particularly influenced by pioneer Louis Bl riot. In 1929, he became an Indian citizen and received the country’s first pilot license.

In July 1932, he established Tata & Sons’ Aviation Department, which ultimately became Tata Airlines and then Air India. It was once the Indian subcontinent’s largest airline.

When he was only 34 years old, he was elected chairman of Tata & Sons. He rose to become the leader of India’s greatest industrial conglomerate, leading it to great financial success while upholding high ethical standards.

From 1932 until 1941, he was a trustee of the Sir Dorabji Tata Trust and helped to build the Tata Memorial Center for Cancer Research and Treatment.

By founding a joint venture with Daimler-Benz of Germany, he formed Tata Motors, a locomotive manufacturing company, in 1945. For years, this corporation controlled the Indian commercial vehicle sector before expanding into the passenger vehicle market.

In 1953, the Indian government named him as Chairman of Air India and a director on the Board of Indian Airlines. For the next 25 years, he would hold these roles.

He was deeply concerned about the well-being of his employees, and in 1956 he established a program to give them a bigger say in the company’s operations. He gave his staff good working conditions, free medical care, and compensation for accidents.

He rapidly enlarged the Tata Empire during the next several years. In 1964, he started Tata Tea Limited, in 1968, Tata Consultancy Services, and in 1987, Titan Industries.

For more than 50 years, J.R.D. Tata was the Chairman of the Tata Group, making it India’s most well-known global brand. More than just a great business, the group actively contributed to the betterment of Indian society.

He was the proud recipient of various international aviation accolades, including the Tony Jannus Award (1979) and the International Civil Aviation Organization’s Edward Warner Award (Canada) (1986).
In 1992, he was awarded the Bharat Ratna, India’s highest civilian honor, for his selfless contribution to humanity.

In 1930, J.R.D. Tata married Thelma Vicaji. There were no offspring for the couple.
He died of a renal illness at the age of 89.

JRD is one of the wealthiest entrepreneurs and one of the most well-known. JRD Tata’s net worth is estimated to be $5 billion, according to Wikipedia, Forbes, and Business Insider.