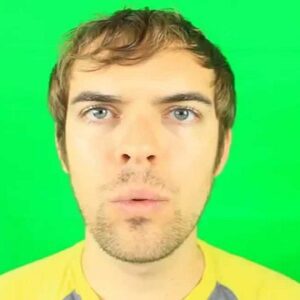 Jack Douglass, born John Patrick Douglass, is best known to his admirers as ‘jacksfilms’ on YouTube. He’s an American singer and comedian known for his parodies, skits, and, of course, the ‘Your Grammar Sucks’ series on YouTube. While in high school, Jack developed an interest in music and began playing the French horn and piano. Boys would be boys, experimenting with their curiosities, so he began creating films with his pals for fun and uploading them to YouTube soon after. Their fame grew exponentially. As a result, Jack started his own YouTube channel, ‘jacksfilms,’ where he posted his videos on a daily basis. One of his most popular series is ‘Your Grammar Sucks,’ in which the humor revolves around improper grammar, spelling, and punctuation. His other two popular shows are ‘JackAsk,’ in which he answers fan questions, and ‘Yesterday I Asked You (YIAY),’ in which he asks viewers questions and broadcasts the most amusing responses. Jack moved to Los Angeles, where he caught up with other YouTubers and grew his following. The ‘Sideburns,’ a trio consisting of Jack Douglass, Toby Turner, and Sean Klitzner, rose to recognition and became known as the ‘Sideburns.’ Jack Douglass is someone to keep an eye on if you’re interested in YouTube.

Douglass turned professional in June 2006, when he launched his own YouTube channel, ‘jacksflims.’ His first video post featured members of his family in a promo for the ‘Handy Pen,’ a product he designed.

In January 2009, he uploaded ‘WTF Blanket,’ a parody of the ‘Snuggie Blanket.’ During this time, the majority of his films were parodies of infomercials, with a heavy emphasis on Apple products. Since its inception in June 2011, ‘Your Grammar Sucks’ has been one of his most successful projects.

On November 20, 2015, the 100th episode was released as a one-hour video including several of his fellow YouTubers.

Because of his popularity, he was featured in the 2016 edition of YouTube Rewind. During that time, he launched two more popular shows: ‘JackAsk’ in January 2014 and ‘Yesterday I Asked You (YIAY) in February 2015.

His popularity grew, and his channel, ‘jacksflims,’ was ranked 54th on the list of ‘New Media Rockstars Top 100 Channels.’ The success of ‘Jacksfilms’ inspired him to create three more channels: ‘jackisanerd,’ ‘featuredfridays,’ and ‘SHUTUPDENNIS.’

In November 2015, he began a series called “Jack Talks Trailers,” in which he evaluates trailers for movies that had been released in the previous week. In addition to ‘jacksfilms,’ he created a name for himself by portraying ‘Intern 2’ on ‘My Music,’ which has over 492,000 subscribers and 44.6 million video views.

His sense of humor and musical ability complemented one another, and his audience expanded. Jack’s musical talent shines through in his music videos, where he plays the piano, guitar, and ukulele.

His musical hits include ‘Valentine’s Day Song’ (2012) and ‘All I Want For Christmas Is A Girlfriend’ (2007). He now has a net worth of almost $ 2 million, with over 100 million video views and more than two million members.

Jack Douglass was born in Columbia, Maryland on June 30, 1988. He has two older sisters and is of Irish descent. He attended primary and middle school in Maryland, graduated from Atholton High School, and earned a bachelor’s degree in film from American University in Washington, DC, with a minor in music theory.

From 2010 until 2012, he dated Kristen Klessig. He got engaged to Erin Elizabeth Erin after his breakup with Klessig. She goes by the stage name 2toesup and has starred in a number of Jack’s videos, including ‘Hot Irish Girl.’

In 2013, he took a break from his career when he was brought to the hospital owing to acute abdominal pain. There’s no need to be concerned; Jack is back in action!

Jack” Douglass is the owner of the YouTube channel Jacksfilms. His net worth is believed to be $8 million.