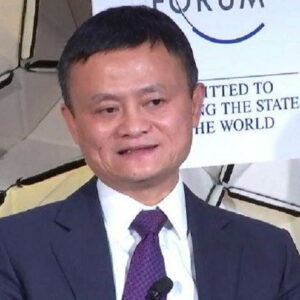 Jack Ma is a philanthropist, investor, and businessman from China. Jack was once a poor lad who made a living by guiding visitors, but he rose above his plight and achieved success. He began by working on his communication skills and learning English. Even when the rest of the world didn’t believe in his vision, Jack was one of the first few people to see the Internet as an economic potential. In just three years, the entrepreneur moved from launching his first business with $20,000 to earning about $800,000. He rose to global prominence after founding the e-commerce business ‘Alibaba’ in the late 1990s. The firm’s profits enabled him reach the pinnacle of his achievement, making him China’s richest man. He also co-founded several comparable businesses that were largely successful, one of which was the e-commerce website ‘Taobao.’ Jack has received numerous honors. He’s also been published in prestigious publications including ‘Forbes’ and ‘Time.’

Jack was born Ma Yun in Hangzhou, Zhejiang, China, on September 10, 1964. His parents worked as musicians who told stories through music. Jack has been interested in learning English since he was a child and has worked hard to improve his communication skills in the language. His ambition to improve his English led him to seek out a hotel frequented by English-speaking visitors.

In order to spend more time with native English speakers and learn the language by chatting with them, the kid began guiding visitors. He became pen pals with one of these foreigners, who dubbed him “Jack” because he couldn’t say his Chinese name.

Jack, too, intended to attend university and took exams in order to be accepted. Despite his early failures, he was able to pass the examinations after four attempts. He then enrolled in the ‘Hangzhou Teacher’s Training Institute’ to study English for a Bachelor’s degree. In the year 1988, Jack received his diploma from the institution.

When Jack first learned about the Internet in the mid-1990s, he saw it as a fantastic business prospect. In 1995, he traveled to the United States to study more about the Internet. He learned how to link to a website from one of his buddies. He even raised $20,000 the same year to launch his own firm, with the purpose of focusing only on the Internet. The company’s mission was to design websites for their clients. Despite the fact that this type of business was relatively new, Jack was able to earn $800,000 in just three years.

In 1998, Jack was appointed as the head of a firm governed by the ‘China International Electronic Commerce Center’ due to his performance in this field. He stayed at this IT company for another year. After stepping away from his responsibilities in 1999, Jack and his friends formed the firm ‘Alibaba.’ The goal was to build a website that would work as a one-stop shop for business-to-business transactions.

During the years 1999-2000, the company obtained a $25 million investment, which aided in its expansion tremendously. The company’s operations soon grew to over 240 countries and territories.

Jack then tried his hand at e-business, which he saw as a wonderful money-making strategy for the twenty-first century. He went on to start a number of companies, including ‘Taobao,’ ‘Lynx,’ and ‘Ali Mama.’

‘Taobao’ became a leading e-commerce website on the Internet, attracting the attention of the popular e-commerce corporation ‘e-bay,’ which was interested in acquiring the company. Jack, on the other hand, was uninterested in signing a contract with the firm.

In 2007, many individuals from all around the world protested against the corporation ‘Alibaba,’ and Jack became a target of criticism. They stated that the company made a lot of money selling animal goods through its website. Jack chose not to sell shark flesh items through his internet portal after receiving requests from nature enthusiasts all around the world.

His company raised $25 billion in the largest initial public offering (IPO) in US financial history on the New York Stock Exchange. Following that, Jack was named executive chairman of the ‘Alibaba Group.’

He also owns ‘Château de Sours,’ ‘Chateau Guerry,’ and ‘Château Perenne,’ among other properties. In 2017, he assured then-president-elect Donald Trump that he would create one million jobs in the United States.

Later in the year, Jack’s ‘Alibaba Group’ celebrated its 18th anniversary. He dressed himself like a heavy metal lead vocalist and performed on stage for the song ‘Can You Feel The Love Tonight.’ He also gave a performance that was influenced by Michael Jackson. Meanwhile, Jack went into show business and made his acting debut in the 2017 Chinese Kung fu short film ‘Gong Shou Dao.’

In 2019, he stepped aside as executive chairman of ‘Alibaba Group Holding’ to focus more on his humanitarian efforts through his foundation. He also denied reports that he was coerced into doing so by the Chinese government. Daniel Zhang, who was previously the CEO of ‘Taobao,’ took over as his successor.

Jack Ma is best known as the founder of the e-commerce behemoth ‘Alibaba,’ which is one of the world’s most popular e-commerce platforms. The company, which is seen as a competitor to other well-known websites such as ‘eBay,’ has aided Jack Ma in becoming China’s richest man.

Jack was named in the ‘Top 10 Economic Personalities of the Year’ list compiled by ‘China Central Television’ in 2004. In 2005, he was named one of Asia’s “25 Most Powerful Businesspeople.” In 2007, he was selected ‘Businessperson of the Year’ by the journal ‘Business Week.’ Jack’s life was turned upside down in 2009, when he was named on Time magazine’s list of the “World’s 100 Most Influential People.” He was also named ‘CCTV Economic Person of the Year: Business Leader of the Decade’ in 2009.

In 2014, the prestigious ‘Forbes’ magazine ranked him as the world’s 30th most powerful person. He was honored with the ‘Entrepreneur of the Year’ award at the 2015 ‘Asian Awards’ presentation.

In 2017, he was placed second on Fortune magazine’s list of the “World’s 50 Greatest Leaders.” He was named as a new ambassador for sustainable development growth by UN Secretary General António Guterres in May 2019, among 16 other notable global figures.

Jack Ma married Zhang Ying, a woman he met at the ‘Hangzhou Teacher’s Institute’ when they were both students. Zhang was instrumental in launching Jack’s first business endeavor. The couple has three children together.