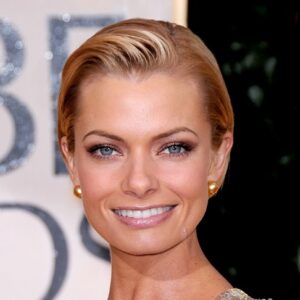 Jaime Pressly, an Emmy Award winner and one of the hottest worldwide models, is a well-known American actress. She began modeling at the age of fourteen and quickly rose through the ranks of television and movies. Jaime is best known for her appearances as Mika in the TV series ‘Mortal Kombat: Conquest,’ Joy Turner in the sitcom ‘My Name is Earl,’ Dottie Matthews in the film ‘Inferno,’ and others. She is also renowned for her guest appearance in the song ‘Fever’ by the band ‘The Pussycat Dolls.’ She has a large social media following, with over 46,000 Instagram followers and 49,300 Twitter followers. With her apparel company ‘J’Aime,’ which began as a lingerie line, she became an entrepreneur. In 2017, the multi-talented actress will star as Crystal Clemens in the comedic drama ‘Austin Found.’

She studied gymnastics and dancing lessons for around eleven years before moving to Tinseltown. She was offered many modeling gigs after going to California before finishing high school and made it to the cover of ‘Teen Magazine.’

When she was offered a modeling job in Japan, she had to seek formal emancipation from her parents because none of her siblings could accompany her on the trip. As a result of her modeling career, she has appeared on the covers of various international magazines, including ‘Playboy,’ ‘Maxim,’ and ‘Allure.’

She was offered recurrent and minor roles in TV series and films around the same period, including Violet in the 1997 film ‘Poison Ivy: The New Seduction,’ Audrey in the TV series ‘Jack and Jill,’ and roles in the 2001 films ‘Not Another Teen Movie’ and ‘Joe Dirt.’

The following year, she was named eighth among the ‘102 Sexiest Women in the World’ by ‘Stuff’ magazine.
With her first success, she started her own bikini brand, ‘J’Aime,’ which eventually expanded into a full clothing line.

In 2005, she was cast as Joy Turner in the NBC sitcom “My Name is Earl,” for which she won an Emmy and was nominated for a Golden Globe. Since then, she has appeared in numerous music videos, including Aerosmith’s ‘Girls of Summer,’ a cover of ‘Tainted Love,’ and others.

Her recent performances as Jennifer Falls in ‘Jennifer Falls,’ ‘I Hate My Teenage Daughter,’ and Megan in ‘A Haunted House 2,’ among others, have been outstanding.

Jaime began her career as an adolescent model and artist, and she has steadily improved as a performer. Unlike many young women her age, the stunning blonde set her sights for the stars and was bold enough to carve out a career in the fashion and entertainment industries on her own terms.

She is a successful businesswoman who effortlessly balances her roles as a mother, actor, and entrepreneur. Bulimia, an eating disorder, plagued her throughout her teens. She, on the other hand, dealt with it with zeal, dismissing any excuses and refusing to let it damage her career.

Jaime has always prioritized her health and fitness; she eats well and occasionally indulges in junk food cravings, but she never fails to go to the gym.

She enjoys watching movies and taking notes on other performers’ outstanding performances. Despite her hectic schedule, she makes time for her family and children.

She stated in an interview that she had planned to book a seat on one of the planes that later crashed into the World Trade Center on September 11, 2001, but decided against it because the flights were early morning flights, and she is grateful to God for changing her mind.

Jaime Pressly was born on July 30, 1977, in North Carolina, to Brenda Sue, a dance instructor, and James Liston Pressly, a car salesman.

In 1992, her family relocated to California, where she continued her education but eventually dropped out to pursue a modeling career.
She is a professional gymnast as well as an exceptional dancer. She met DJ Eric Calvo in 1996 after establishing her profession and dated him for a few years.

In 2007, she gave birth to her first child, Dezi James Calvo. The couple, however, divorced shortly after their son was born.
Simran Singh, an entertainment lawyer, was her next boyfriend. They married on September 26, 2009, but after two years of marriage, they went their separate ways.

Jaime hasn’t been linked to any celebrities after her divorce, and she hasn’t mentioned being in a relationship.

Jamie Pressly is an actress and model from the United States with a net worth of $7 million.