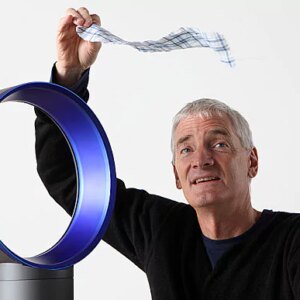 Sir James Dyson is a British inventor who created the bagless vacuum cleaner Dual Cyclone. He created Dyson Ltd., a technology firm that creates and manufactures vacuum cleaners, hand dryers, bladeless fans, and heaters, in 1993. He is a highly successful industrial designer and entrepreneur. He was born into a middle-class family in rural England and had a typical upbringing until his father died when he was nine years old. James felt insecure and began looking for ways to establish his worth after being left without a father to advise him. From a young age, he was gifted with a high level of intelligence and innovation, as well as a strong sense of determination. He initially chose to study painting at the Byam Shaw School of Art, but then changed his major to furniture and interior design at London’s famed Royal College of Art. He was introduced to the creative potential of combining engineering and design as a college student, a crucial lesson that lead him to become one of the most aesthetic and inventive technology inventors of our day. Many of his inventions, notably the Dual Cyclone bagless vacuum cleaner, were inspired by his personal dissatisfaction with the inefficiency of existing machines.

As one of Alec Dyson and Mary’s three children, James Dyson was born on May 2, 1947, in Cromer, Norfolk, England. His father worked as a schoolteacher.

James’ father died of cancer when he was nine years old. This tragedy had a profound impact on the little kid, who felt adrift and insecure without a father figure to guide him.

From 1956 to 1965, he attended Gresham’s School, a residential school in Holt, Norfolk. As a student, he excelled in long-distance running, and he attributes his success as a runner to his tenacious persistence.

After graduation, he traveled to London and studied for a year at the Byam Shaw School of Art (1965–66), before going to the Royal College of Art to study furniture and interior design (1966–70). Later on, he went into engineering.

The career of James Dyson

He went to work for Rotork Controls Ltd. in Bath, Somerset, after graduating in 1970. He had the fortunate pleasure of working with an unconventional boss, Jeremy Fry, who encouraged and motivated young people to be innovative.

Despite the fact that Dyson had no prior experience in product design, his supervisor assigned him the task of creating a high-speed landing craft. He designed the Rotork Sea Truck with his boss, a flat-hulled, high-speed watercraft that looks like a small landing craft.

His first unique innovation, the Ballbarrow, was created in 1974. It was a wheelbarrow variant with a molded plastic hopper on a steel frame and a spherical plastic wheel that allowed for greater maneuverability than a traditional design.

He had a problem with his new vacuum cleaner in the late 1970s, and he believed the “bag” mechanism was preventing the equipment from performing efficiently. As a result, he started working on a more efficient bagless vacuum cleaner.

He came up with the notion of using cyclonic separation to develop a vacuum cleaner that would maintain suction while picking up dirt, and he worked diligently on his ideas for the following five years. In 1983, he finally released the “G-Force” cleaner.

He couldn’t find a distributor for his goods in the UK, so he sold them through catalogs in Japan. The product proved highly successful in Japan, and he was able to start his own company, Dyson Ltd., in Malmesbury, Wiltshire, England, in 1993 with the revenues from its sales.

In 1993, he introduced the Dyson DC01 vacuum cleaner in the United Kingdom. Within a few years, the vacuum cleaner had become the best-selling in the country. Following the success of this model, he went on to develop several more enhanced variants throughout the years.

In 2000, his business introduced the ContraRotator, a washing machine with two revolving drums running in opposite directions. However, the machine was not a commercial success and was eventually phased out.

In 2006, he introduced the Dyson Airblade, a quick hand dryer that removes water using a narrow sheet of flowing air as a squeegee rather than heat. This design utilizes less energy and enables faster drying than typical electrical hand dryers.

He is well recognized as the creator of the “G-Force,” a bagless vacuum cleaner with dual cyclones. The product, which was first marketed by a Japanese business, proved extremely popular in Japan, and Dyson used the money he made from G-Force to launch his own company, Dyson Ltd.

In 1968, James Dyson married Deirdre Hindmarsh, a painter and art teacher. Emily, Jake, and Sam are their three children.

James Dyson has a net worth of $22 billion and is a British inventor, designer, farmer, and entrepreneur.