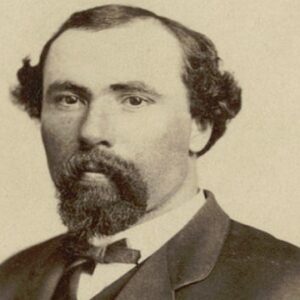 James J. Hill was born on September 16, 1838, to Anne Dunbar Hill and James Hill. His father was a hired farmer who was occasionally employed in Ontario, Canada.

He had a catastrophic injury as a toddler, when an arrow pierced him in the right eye, permanently blinding him. However, this episode had little impact on his subsequent career.
He began formal education at the age of nine.

His father was unable to pay his school tuition, but a generous headmaster at the ‘Rockwood Academy’ allowed him to attend for free.

He studied algebra, mathematics, geometry, land surveying, and English while he was there. As a result, he was able to apply the information he gained at the academy to start his own firm later in life.
He may have thought himself fortunate to have received a solid education, but fate dealt him a blow when his father died. James Hill was only fourteen years old at the time of his death.

Following his father’s death, his mother struggled to provide for her children while only running a tiny inn. As a result, Hill dropped out of school in 1852 and went to work in a grocery store to help support his family.

The First Steps Towards Entrepreneurship

At the age of seventeen, James Hill obtained work as a clerk for a firm of shipping brokers in Minnesota, where he traded and worked with steamboats. Before going to Minnesota, he had learned bookkeeping as a clerk in Kentucky, which had helped him supplement his skills and got him this job.

He was already coordinating cargo transfers for wholesale grocers via railway and steamboats in 1860. He observed and learned, and he came up with clever ideas as a result. Gradually, he began to work for himself.
The Mississippi River froze during the winter season, making steamboat trading impossible. As a result of his cargo expertise, he began bidding for other contracts and won quite a number.

He deftly entered the coal business during the Civil War in 1867, supplying coal instead of wood, which was in short supply at the time. By 1879, this enterprise had increased his profits fivefold, solidifying his monopoly in the anthracite coal market.

In 1870, he formed his own ‘Red River Transportation Company’ with a few friends, offering riverboat freight transit between St. Paul and Winnipeg.
He also formed partnerships with a number of banks and served on the boards of directors of several of them. During this time, he purchased a number of failing enterprises, reformed them, and then sold them for a profit.

The St. Paul and Pacific Railroad

It wasn’t until the 1870s that he saw the potential of a railway system in the Red River Valley. He saw the enormous growth and opportunity that it would bring to the northwest region.

He was able to save it from bankruptcy and even expand the rails because to his keen assessments and bargaining skills. He quickly rose through the ranks of the newly founded St. Paul, Minneapolis, and Manitoba Railway Co. to General Manager.

Hill enlisted the help of hundreds of immigrants and established tiny homesteads in Dakota and Montana, which aided in the development of marketplaces; he also employed railroads to transport immigrants from one location to another. The company’s net value increased from $728,000 in 1880 to $25,000,000 in 1885.

He was well aware that his rising riches would soon be scrutinized by the Federal Government, so he spent them prudently. He re-invested a significant portion of his profits into the company, allowing it to expand and upgrade, earning him the title of president.

President Theodore Roosevelt disapproved of his railway monopoly when he was at the pinnacle of his prosperity. Many people were envious of his great success because his narrative was a true-life rags-to-riches fairy tale. His foresight and flexibility during a moment of severe financial loss were outstanding. Even during the Great Depression, he was the sole businessman who made a substantial profit.

Many people thought it was “Hill’s mistake,” yet it turned out to be his biggest success. He wanted to establish a rail line across the Rockies to the Pacific in the late 1880s. Without government land allocations, the endeavor looked hopeless.

Nonetheless, he was intent about constructing the straightest, shortest path across the Northwest. In 1889, John F. Stevens, the company’s lead engineer, discovered the ‘Marias Pass,’ which was the Rocky Mountain’s lowest crossing region.

The following year, James J. Hill built a rail line over the ‘Marian Pass’ without building a tunnel and changed the company’s name from the ‘St. Paul and Pacific Railroad’ to the ‘Great Northern Railway Company.’

E.H Harriman, the successful and powerful owner of ‘Union Pacific Railway,’ saw him as a formidable adversary. Both sides wanted the Chicago, Burlington, and Quincy railroads to expand their already thriving operations. Then Harriman began buying Northern Pacific stock in the hopes of eventually taking control of the company.

The opposing teams had to arrange a truce, after which Hill and Morgan joined forces to stabilize the stock market. The two founded the ‘Northern Securities Company’ after acquiring the three rails.

As a result of these events, he became known as a fearless businessman who overcame the ‘Panic of 1893’ and stood like a pillar in the midst of America’s financial upheaval.

He fell in love with Mary Theresa Mehegan, a waiter at Merchant’s Hotel, where he frequently dined. She was a devout Catholic and the daughter of an Irish immigrant. She was educated at Notre Dame’s St. Mary’s Institute.
The pair married in 1867, and their union gave birth to ten children, one of whom (Katherine) died in infancy. Mary, James, Lewis, Clara, Charlotte, Ruth, Rachel, Gertrude, and Walter were the rest of their offspring.

Hill was noted for being direct with a sense of fun. He was a voracious reader who also dabbled in poetry. He was quick-witted and spoke in a lively manner. It’s also true that he used to ride his horse and assess the regions where rails were to be placed.

He sold his business to his son in 1907, but his tenacity and ambition drove him to work every day until a week before his death. He gradually became increasingly charitable over time, donating millions to the sick and disadvantaged, and extending specific financial assistance to the victims of the ‘Titanic’ disaster.

Hill began to suffer from a variety of unpleasant diseases as he grew older. He was unable to find comfort despite receiving treatment from the greatest experts. His aches and pains became terrible, and his health began to decline.
He died on May 29, 1916, and was buried at ‘North Oaks Farm,’ but his coffin was relocated to ‘Resurrection

Cemetery,’ in St. Paul, where his burial was guarded, due to vandalism.
Hill’s home has been preserved and is now a museum. Despite his protestant religion, he gave generously to St. Paul Seminary. He also played a role in the founding of the Marquette University School of Medicine.

His heirs established the James J. Hill Reference Library in his honor, which delivers practical business information to firms across the country.

He was also responsible for the construction of the Spokane, Portland, and Seattle Railway. James J. Hill was valued more than $53 million at the time of his death in 1916 (equivalent to more than $1,260,492,355 today).

Hill was known for his deft economic acumen, but he also had a strong appreciation for art. His ‘Summit Avenue’ residence had a large collection of French landscape paintings that stretched two stories.