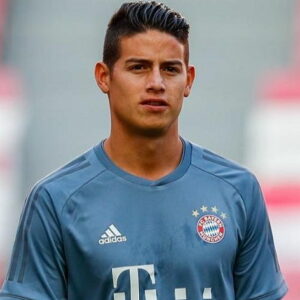 James Rodrguez is a Colombian professional footballer who plays for Real Madrid and the Colombian national team. He is frequently regarded as one of the world’s top young players. He is a winger or attacking midfielder who is noted for his technique and playmaking abilities. He can play on both wings and in the center. Young James developed an early affinity for football as the son of Wilson James Rodrguez, who was also a football player. His father coached and supported him from the start to pursue a career as a professional athlete, something he himself had not been able to do. He began his football training at a young age and evolved into a talented player by his early teens, turning professional at the age of 15 with Colombian second division club Envigado. He was recruited by Argentine team Banfield after a good run in his home country, where he made his team debut in 2009. His dazzling performances wowed his teammates, coaches, and opponents, and he went on to become one of the best young players in the world today. Despite Colombia’s defeat in the quarterfinals, he put in a fantastic performance at the 2014 FIFA World Cup, winning the Golden Boot.

Wilson James Rodrguez Bedoya and Maria Del Pilar Rubio gave birth to James David Rodrguez Rubio on July 12, 1991, in Ccuta, Colombia. His father was a football player who played for the Colombian national team and was a member of the 1985 U-20 team. Wilson’s sporting career was cut short due to injuries and a struggle with drinking.
James inherited his father’s enthusiasm for football and took up the sport at a young age. He used to play Pony Ftbol with Academia Tolimense when he was a kid, and by the time he was in his early teens, he was a highly accomplished player.

When he was in his mid-teens, he joined Colombian second division club Envigado and turned professional. He was promoted to Colombia’s premier division the following year.

In 2008, he was signed by the Argentine team Banfield, and in February 2009, he made his team debut. On February 27, he scored his first goal, a long-range drive in a 3–1 victory over Rosario Central.

He wowed his coaches and teammates with his brilliant performances while he was only 17 years old, and he quickly established himself as a regular first team member, appearing in every game in the Apertura 2009. He also became Argentina’s youngest foreigner to score a goal. Throughout the year, he put on a fantastic show and quickly built a sizable fan base.

He was a highly sought-after talent, and in July 2010, he was signed by Porto, a Portuguese sports club, for €5.1 million. In a 3–1 home victory for Porto against Bulgarian club CSKA Sofia in December 2010, he scored his first goal in European competition.

In the 2011-12 season, he scored 14 goals and added 11 assists for Porto, taking his career to new heights. He was also the first Colombian to receive the LPFP Breakthrough Player of the Year Award in 2011.

In the 2012-13 season, he became a regular starter. He was instrumental in his team’s 1-0 victory over Paris Saint-Germain in the 2012–13 UEFA Champions League group stage. In a 2–1 win over Estoril, he also had an assist on a goal. He maintained his outstanding play throughout the season, scoring 13 goals and adding 15 assists in 32 games.
In 2013, James Rodriguez joined AS Monaco for a sum of €45 million, making it one of the most expensive transfers in football history. In a 2-0 victory over Bordeaux, he made his Monaco debut. During the season, he also assisted on two goals in a 2-1 win for Monaco over Saint-Étienne. In a 2–0 win over Rennes, he scored his first goal for the club with a free kick.

James was nominated to Colombia’s 23-man team for the 2014 FIFA World Cup in June 2014. He was outstanding in the group stage, particularly in the team’s opening encounter against Greece, where he scored a last-minute goal and set up the first two goals. He also played a key role in the team’s victory over Ivory Coast in the tournament’s second encounter.

In the last group stage encounter against Japan, he continued his outstanding performance by assisting two goals and scoring one himself, helping his country to a 4-1 triumph. At the completion of the group stage, FIFA named him the best performing player in the tournament.

Colombia advanced to the World Cup quarter-finals for the first time thanks to his steady efforts. Despite James’ outstanding performance, Colombia fell 2-1 to Brazil in the quarter-finals. He scored six goals and added two assists in five games during his debut World Cup campaign.

After the World Cup, he signed with Real Madrid in Spain for an unknown cost of around €80 million, according to reports. He made his UEFA Super Cup debut against Sevilla at Cardiff City Stadium, which Real Madrid won 2–0. In August 2014, he scored his first goal for Real Madrid against Atlético Madrid.

In 2011, he married Daniela Ospina and they have a daughter, Salome. He is a devout follower of Christ.