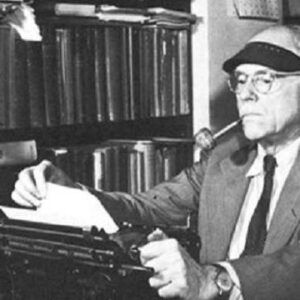 The things a person leaves behind can sometimes tell us what they were really like. James Tobin is one of these people whose lifelong work in economics has changed the way we think about how financial markets work. Tobin was born into a middle-class, educated, and liberal family. From the time he was a child, he was exposed to intellectual conversation, which shaped his career and his way of thinking. He was very interested in economics because he thought it could help people. His ideas were greatly affected by the fact that he grew up in the 1930s, during the Great Depression, a time of social and political turmoil. He thought, and he was right, that the failure of capitalist economics was the main cause of many of the world’s economic problems. So, during that time of crisis, he too helped start a revolution in economic theory, partly as a challenge to the economic orthodoxy of the time. Many of his ideas are still used in financial models today, and his works are still taught in economics classes as standard material. Keep reading the biography to learn more about one of the smartest people who ever lived.

How James Tobin Grew Up

James Tobin was born in Champaign, Illinois, in 1918 to Louis Michael Tobin and Margaret Edgerton Tobin. His father was a reporter, and his mother worked with people in need. He learned about the problems caused by poverty and unemployment from his mother.

She told him about relief efforts she had been a part of. Tobin thought that his father, who was smart, curious, and learned, was his best teacher. His parents taught him and his brother about different political ideas when they were young. In the conservative society of his home country, these ideas were seen as strange and radical.

He went to school in his neighborhood for elementary and middle school. After that, he went to University Laboratory High School in the twin city of Urbana. At University High, he was put on the basketball team, which helped him reach his goals as an athlete.

Tobin assumed that he would have to go to the local university and then study law. However, on the advice of his father, he took the tests to get into Harvard University and was admitted with a scholarship in 1935. His father always read the New York Times, which is where he found out that Harvard was giving out new scholarships to students from different backgrounds.

Higher Education During the War

During his six years at Harvard, he not only made friends from many different places, but he also had the chance to learn from some of the best professors there, such as Joseph Schumpeter, Alvin Hansen, Seymour Harris, Edward Chamberlin, Edward Mason, Gottfried Haberler, Sumner Slichter, and Wassily Leontief.

In those days before the war, Harvard was the center of intellectual life, and Tobin got caught up in the heated political debates on campus. He worked with and became friends with people like John Kenneth Galbraith, Lloyd Metzler, Abram Bergson, and Paul Samuelson, who all went on to become famous economists like him.

James Tobin left Harvard in the spring of 1941. In the same year, he turned in his first article for a seminar. It was based on his thesis and was about using statistics to move the economy forward. He got a job at the Office of Price Administration and Civilian Supply and the War Production Board in Washington, D.C., on the advice of Ed Mason, for whose seminar he had written the paper.

There, his main job was to set limits on how much could be used for civilian purposes. This was needed for defense production because the US was getting ready to join World War II. After the US joined the war the next year, he became an officer in the US Naval Reserve and trained for 90 days at the Columbia University dorms.

There, the author Herman Wouk and the lawyer Cyrus Vance were two of his friends. Tobin joined the U.S.S. Kearney, which was working in the Atlantic and the Mediterranean to protect convoys and fight submarines. His destroyer also took part in the campaigns in North Africa, Southern France, and Italy.

He was a line officer for four years before becoming the chief officer. He always remembered how different his time in the war was from his time in school.

After the war, he decided to try his luck in Washington, where he thought he might have some chances. But at that time, he got a letter from the head of Harvard Economics, Harold H. Burbank, who persuaded him to go to school.

So, Tobin went back to Harvard in 1946 and got his Ph.D. in 1947. In the same year, the Society of Fellows at Harvard chose him to be a Junior Fellow. So, he had money to study, do research, and write for the next three years.

His time as a Junior Fellow was full of exciting things. In economics, he not only made up for what he missed during the war, but he also wrote a lot about macroeconomics and other topics for different publications. During those years, he also wrote a book called “The American Business Creed” with another person.

Between 1949 and 1950, he went to England to visit the Department of Applied Economics at Cambridge. He works well with Hendrik Houthakker and Michael Farrell on that project.

James Tobin was interested in and good at quantitative analysis and theoretical reasoning, which led him to economics. But he didn’t learn about John M. Keynes’s General Theory of Employment, Interest, and Money until 1936 when he was in his second year of college.

This made him even more interested, so much so that he did his graduation thesis on a critical analysis of Keynes’ method for bringing about “involuntary” equilibrium unemployment. Later, when he was getting his M.A., famous economists like Alvin Hansen, Joseph Schumpeter, and Gottfried Haberler oversaw his work. After his fellowship at Harvard ended in 1950, he moved to Yale University.

During this time, he also started writing articles about the economy for people who didn’t know much about it. The National Economic Policy, which is a collection of these articles, was put out in 1966. He was elected President of the Cowles Foundation in 1955 and stayed in that position until 1961.

From 1964 to 1965, he was also the head of that foundation. He did a lot of research on the micro-foundations of Keynesian economics at Yale and the Cowles Foundation. Money and economics were his main areas of interest. In 1957, he got a job at Yale as the Sterling Professor.

Aside from his work as a teacher and researcher, James Tobin was also very active in public life. He worked as an economic expert and policy consultant for a number of groups and wrote a lot about current economic issues. In 1961, John F. Kennedy asked him to join the Council of Economic Advisors (CEA). He did so and worked there until 1962 when Walter Heller took over as head.

From 1963 to 1968, he worked as a consultant. At the CEA, he helped come up with the Keynesian economic policy along with Kenneth Arrow, Arthur Okun, and Robert Solow, who are all well-known economists. Together, they wrote their best work, The Economic Report, which came out in 1962 and was called the “new economics” by the press. The Kennedy administration did a great job of carrying out the plan they made.

He also worked as a consultant for the US Treasury Department and served on the Board of Governors of the Federal Reserve System Academic Consultants for several terms. From 1966 to 1970, he was the head of the New Haven City Plan Commission. In 1971, the American Economic Association chose him to be its president.

He was a member of many professional groups and the trustee of Economists for Peace and Security over the course of his career. In 1972, the article “Is Growth Obsolete?” that he and fellow economics professor William Nordhaus wrote together became a classic. In the paper, the authors talked about the Measure of Economic Welfare, which is the first model for measuring and assessing economic sustainability.

In 1988, he quit his job at Yale. Tobin received a number of prestigious awards for his work in the field of economics. The most well-known of these is the John Bates Clark Medal in 1955 and the Nobel Prize in Economics in 1981. These awards were given to him for his “analysis of financial markets and their relationships to spending decisions, employment, production, and prices.”

Life and Death Close to Home

James Tobin married Elizabeth Fay Ringo on September 14, 1946. He had met her at Cambridge in the spring of the same year. They had four children: Margaret Ringo, a fashion designer, Louis Michael Ringo, and Hugh Ringo, both lawyers, and Roger Gill, a physics student. He died in Connecticut on March 11, 2002, and his wife died at the end of June 2009.

1941: “A note on the problem of money wages.” “A Dynamic Aggregative Model” was published in the Quarterly Journal of Economics in 1955. Journal of Economic Policy
“The Interest-Elasticity of Transactions Demand for Cash” was published in 1956. A Look at Economics and Numbers
“Estimation of relationships with a limited number of dependent variables.” Econometrica
1958: “Preference for Liquidity as Behavior Towards Risk.”

Private Values and Public Policy in Economic Progress
1992 – “Money”. The New Palgrave Dictionary of Money and Finance
“Money, Credit, and Capital,” a book by Stephen S. Golub, came out in 1998.

From 1950 to 1955, I was an associate professor of economics at Yale.
1953: Worked as a visiting researcher at the University of Michigan’s Survey Research Center.

P.K. Seidman was the Distinguished Visiting Professor of International Studies at Memphis, Tennessee’s Rhodes College in 1992.
1996: Taught Economics at Yale University during the spring term.