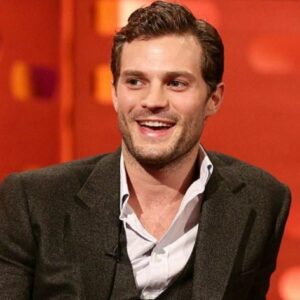 Jamie Dornan is a well-known actor and model from Northern Ireland. Dornan established himself as a notable actor in both television and movies at a time when actors are struggling to break into the industry. The ease with which he morphs into his personas sets him apart from other actors of his time. In 2006, Dornan made his film debut as Count Axel von Fersen in Sofia Coppola’s film ‘Marie Antoinette.’ ‘Fifty Shades of Grey,’ which was released in 2015, was his most successful film to date. At the box office, the picture was a smash hit. Its success prompted two sequels, the first of which came out in 2017 and the second in 2018. While his cinematic career was rapidly progressing, he also gave several outstanding performances on television. ‘Sheriff Graham Humbert’ in the ABC series ‘Once Upon a Time’ was one such performance. His portrayal of serial killer ‘Paul Spector’ in the crime drama series ‘The Fall’ has received widespread acclaim. Dornan has a bright future ahead of him, thanks to his talent and effort.

Professor Jim Dornan and Lorna Dornan gave birth to Jamie Dornan on May 1, 1982, in Holywood, County Down, Northern Ireland. His father is a gynecologist and obstetrician. Liesa and Jessica are Jamie’s older sisters.
Dornan spent most of his childhood in Belfast’s outskirts. When he was 16 years old, his mother died. He was a member of the theatrical department at ‘Methodist College.’ Later, he enrolled in ‘Teesside University,’ but left to pursue a career as an actor. He subsequently relocated to London to pursue a career as an actor.

Jamie Dornan’s first job was as a model. He worked as a model for ‘Abercrombie & Fitch’ in 2003. He went on to model for a variety of fashion houses and outlets, including ‘Aquascutum,’ ‘Hugo Boss,’ and ‘Armani,’ among others. He has also worked on ad campaigns for well-known brands such as ‘Dior Homme’ and ‘Calvin Klein.’ During this time, he was dubbed “The Golden Torso” by the New York Times.
In 2006, he made his acting debut in Sofia Coppola’s historical drama ‘Marie Antoinette.’ In the film, he played ‘Count Axel von Fersen,’ Marie Antoinette’s love interest.
He appeared in the ‘Hammer Horror’ production ‘Beyond the Rave’ in 2008. Dornan was a member of the folk band ‘Sons of Jim’ in addition to acting. He was a vital member of the band till it disbanded in 2008.
Jamie Dornan starred in the drama film ‘Shadows in the Sun’ in 2009. Jean Simmons played the lead in the picture. In the film, Dornan plays the role of ‘Joe.’ He starred as ‘Sheriff Graham’ in the ABC television series ‘Once Upon A Time’ in 2011. He received a lot of praise for his work in the series. Despite the fact that his character was slain in the episode “The Heart Is a Lonely Hunter,” he reappeared as the “Huntersman from the Enchanted Forest” in the season’s last episode, “A Land Without Magic.” Dornan’s next role was as ‘Paul Spector,’ a serial murderer terrorizing Belfast in the British-Irish crime drama series ‘The Fall.’ The show was renewed for a second season in May 2013. People admired how he gave his persona truth and honesty. He did an excellent job in his role. Meanwhile, he was cast for the character of ‘Colin’ in the film ‘Flying Home’ while filming ‘The Fall.’ He starred as ‘Christian Grey’ in the film ‘Fifty Shades of Grey’ in 2015. The film, an erotic love drama based on the same-named novel, was a huge success, breaking multiple box office records and grossing more than $571 million worldwide. The film’s tremendous popularity prompted a sequel and a third installment, both of which starring Dornan and were released in 2017 and 2018.
Dornan was inundated with offers after his role in ‘Fifty Shades of Grey.’ He appeared in three films in 2016 alone. In ‘Anthropoid,’ he first appeared as ‘Jan Kubi.’ In ‘The Siege of Jadotville,’ he created the character of ‘Pat Quinlan.’ The eerie thriller ‘The 9th Life of Louis Drax,’ in which he played ‘Dr. Allan Pascal,’ followed.
Dornan appeared in the sequel to the ‘Fifty Shades’ franchise, ‘Fifty Shades Darker,’ in 2017. Unlike its predecessor, critics lambasted ‘Fifty Shades Darker’ for its screenplay, performances, and narrative. ‘Untogether,’ is one of Dornan’s 2018 initiatives. ‘Fifty Shades Freed’ and ‘Robin Hood’ are two films that come to mind. In the same year, he appeared in the HBO television film ‘My Dinner with Hervé,’ alongside Peter Dinklage.
Dornan co-starred in the romantic drama film ‘Endings, Beginnings’ with Sebastian Stan and Shailene Woodley in 2019. He also appeared in ‘Synchronic,’ a science fiction horror film.
In 2019, he was cast in Josh Greenbaum’s American comedy film ‘Barb and Star Go to Vista Del Mar,’ playing the role of ‘Edgar.’ In the same year, he was cast in John Patrick Shanley’s drama film ‘Wild Mountain Thyme,’ playing the lead part of ‘Anthony Reilly.’

While Jamie Dornan has performed a variety of roles in films and television shows, his most memorable performance was in the film ‘The Fall,’ in which he played a serial killer known as ‘Paul Spector.’ The series, a British-Irish criminal drama, was a huge success, with the first two seasons earning excellent reviews. Despite the fact that the third season was only a middling success, the series remains one of the most popular in UK television history. He’s also recognized for his role as ‘Christian Grey’ in the ‘Fifty Shades of Grey’ film series. ‘Fifty Shades of Grey,’ ‘Fifty Shades Darker,’ and ‘Fifty Shades Freed’ were all major box office hits.

For his part in the television series ‘The Fall,’ Jamie Dornan won the ‘Breakthrough Award’ at the 2014 ‘Broadcasting Press Guild Awards.’ At the ‘Irish Film and Television Awards,’ he earned the ‘Rising Star’ award for ‘Best Lead Actor Television.’
Jamie Dornan was voted third on ‘People’ magazine’s ‘Sexiest Man Alive’ list in November 2014.

From 2003 to 2005, Jamie Dornan was in a romantic relationship with actress Keira Knightley.
On April 27, 2013, he married Amelia Warner, an English actress and singer-songwriter, in a country house in Somerset. The couple has three daughters together. Dornan is a big soccer fan and a die-hard ‘Manchester United F.C.’ follower.

Jamie Dornan  has a net worth of $14 million.