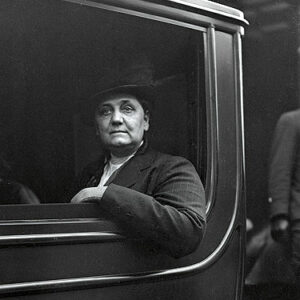 Jane Addams was a well-known social activist and pacifist who co-founded the Hull House community in Chicago. Her father, a state senator, was a well-known figure who knew many notable people, including Abraham Lincoln. She was also a trailblazer in the women’s suffrage movement, fighting for a variety of causes that benefited women and children. This public philosopher, who also worked for international peace, was lauded as the nation’s mother. Addams received the Nobel Peace Prize for her substantial contributions to global civilization, making her the first American woman to receive the prize. Aside from that, Addams and her friend researched social ailments like typhoid and attempted to ameliorate the miseries of the poor, who were disproportionately afflicted by the disease due to poor sanitation and hygiene. She appealed to middle-class women for what she called “civic housekeeping.” This amazing settlement worker was diagnosed with Potts’ Disease when she was four years old, and she suffered from health issues for the rest of her life. Her health rapidly deteriorated when she suffered a heart attack in her final years. In Illinois, this well-known peace activist passed away. Continue reading to learn more about the life and career of this outstanding social worker and political campaigner.

Jane Addams, sometimes known as Laura Jane Addams, was born in Illinois to John Huey and Sarah Addams. She had a total of eight siblings.

She attended Sunday school as a child and spent the majority of her time playing and reading. This political activist was a voracious reader as well.

When she was four years old, she contracted TB of the spine. She got a curvature in her spine as a result, as well as lifelong health issues.

She graduated from the Rockford Female Seminary in Rockford, Illinois, with a collegiate credential in 1881.
She completed her first year of medical school at the Woman’s Medical College of Philadelphia, but she was forced to drop out due to illness and a psychological breakdown.

Jane Addams, accompanied by her stepmother, embarked on a two-year trip of Europe in 1883.
In the summer of 1887, she learned of Toynbee Hall, a settlement house in London that was the first of its sort in the world. She went to Toynbee Hall with her good friend Ellen Gates Starr during her second trip to Europe.

In 1889, Addams and Starr founded Hull House, the first settlement house in the United States. It was built in Chicago, Illinois, and only Addams and Starr lived there at first. When the village was at its heyday, roughly 25 women made it their home, and close to two thousand people visited it regularly.

Kindergarten lessons, a public kitchen, an art gallery, a café, a gym, a book bindery, a bathhouse, a music school, a girls’ club, a theatrical group, and a library were all available at the Hull House. There were further clubs for older children and labor-related divisions in addition to these.

This capable activist joined the Chicago Board of Education in 1905. She then became the chair of the board’s School Management Committee.

Addams took on the work of founding the National Federation of Settlements in 1911 and served as its president for more than two decades.

The social and political activist was appointed national chairperson of the Women’s Peace Party when the First World War broke out.

She was also elected president of the Women’s International League for Peace and Freedom in 1915, which required her to travel to Europe and Asia on a regular basis.

In 1917, she became a member of the Fellowship of Reconciliation in the United States. Addams gave talks on college campuses across the country. She also taught undergraduate courses through the Extension Division of the University of Chicago.

In the Hull House, Jane Addams provided night classes for adults. Many universities now provide continuing education as a result of this.

She was a strong proponent of world peace and spoke frequently on the subject. In 1907, she produced a book called “Newer Ideals of Peace” that contained a collection of her speeches on world peace.
The dedicated activist was elected as the National Conference of Charities and Corrections’ first female president in 1910.

In 1931, Jane Addams received a shared Nobel Peace Prize for her efforts and contributions to highlighting the importance of women in peacekeeping. Her prize money was donated to the Women’s International League for Peace and Freedom by the peace activist.

Jane Addams never married and devoted the rest of her life to social issues. She did, however, have a romantic friendship with Mary Rozet Smith, according to reports.

After suffering a heart attack in 1926, the famed activist’s health began to deteriorate. At the age of 74, she passed away.

Only a few of the original Hull House’s buildings are still standing today. It does, however, serve as a memorial to Jane Addams’ contribution to society and world peace.

Jane Addams’ net worth was estimated to be between $1 and $5 million before she died, according to Wikipedia, Forbes, IMDb, and other online sites. She made her money as a professional Civil Rights Activist. She was born and raised in the state of Illinois.

The father of this gifted political leader was a well-known businessman and the President of Freeport’s Second National Bank. He also created the Illinois Republican Party and served as an Illinois State Senator from 1855 to 1870.

This social crusader was the first woman from the United States to win the Nobel Peace Prize.