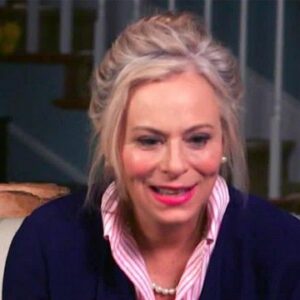 American actress Jane Kaczmarek has distinguished herself in theater, television, and film with tremendous élan, garnering praise and honors for her outstanding performances. This multi-talented actor has a strong body of work, but he is most recognized for his role as “Lois” in the American TV sitcom “Malcolm in the Middle.” She gained a lot of fame from the series and a “Satellite Award” for her outstanding performance. She was nominated for other awards as well, including three Golden Globe nominations and seven Emmy nominations. Other significant TV shows she has appeared in include “Equal Justice” and “Raising the Bar.” Additionally, she appeared in a number of TV movies, including “Without Warning” and “Reviving Ophelia.” She made her film debut in the early 1980s, and the American romantic drama “Falling in Love” gave her her first prominent screen role. After that, she appeared in a variety of movies, including “The Heavenly Kid” and “The Boat Builder,” in which she had leading roles. The Broadway hits “Lost in Yonkers” and “Raised in Captivity,” the latter of which earned her an “L.A. Drama Critics Circle Award,” Jane performed while advancing her on-screen career.

On December 21, 1955, in Milwaukee, Wisconsin, she was given the name Jane Frances Kaczmarek into a Polish family. Her mother, Evelyn (née Gregorska), was a teacher, while her father, Edward Kaczmarek, worked for the “US Department of Defense.” She was brought up in Greendale as a Roman Catholic.

She studied theatre as a major at the “University of Wisconsin-Madison.” In 1979, she earned her diploma in the theater.
She began a program at the “Yale School of Drama” and finished it in 1982. She continued to be connected to the Yale theater company as well.

The career of Jane Kaczmarek

In the October 15, 1982, television movie “For Lovers Only,” Jane made her acting debut as “Margie Spoletto.”
She had appearances in one episode of “Remington Steele,” “Scarecrow and Mrs. King,” three episodes of the American hospital drama “St. Elsewhere,” and three episodes of “St. She appeared as “Mrs. Wilkes” in the December release of the popular action movie “Uncommon Valor” that same year.

She starred in eight episodes of the American TV drama “The Paper Chase” from 1983 to 1984 in the role of “Connie Lehman.”

The part of “Ann Raftis” in the November 21, 1984, romantic drama “Falling in Love,” starring Meryl Streep and Robert De Niro, was one of her early roles that attracted attention. She also made appearances in the TV film “Something About Amelia” and six episodes of the well-known police drama “Hill Street Blues” in that same year.
Later, she was cast as “Emily Barnes,” the lead in the romantic comedy fantasy film “The Heavenly Kid.” At the box office, it took in more than US$ 3.8 million after its July 26 debut.

In the American comedy-drama series “Hometown,” which aired on “CBS” for nine episodes from August 22, 1985, to October 15, 1985, she portrayed the title character, “Mary Newell Abbott.” She played “Katherine Holloway,” the lead in the comedy “Door to Door,” which was released in August of that same year.

She continued acting in both large- and small-screen projects over the next years. She appeared in the movies “D.O.A.” and “Vice Versa” in 1988, the TV movie “The Right of the People” in 1986, and the TV miniseries “I’ll Take Manhattan,” among other works (1987).

She appeared in 22 of the 27 episodes of the courtroom drama “Equal Justice” as “Linda Bauer,” sharing the screen alongside actors such George DiCenzo, Sarah Jessica Parker, Kathleen Lloyd, and Cotter Smith. From March 27, 1990, to July 3, 1991, it aired on “ABC.”

Jane was able to flourish on stage as well as in films and television while enhancing her on-screen presence. She appeared in the Broadway musicals “Raised in Captivity” and “Lost in Yonkers.” She was honored with an “L.A. Drama Critics Circle Award” for her performance in the latter.

She was cast in the American TV sitcom “Malcolm in the Middle” as “Lois,” a brash and intransigent but adoring and protective mother of five kids. Most people would agree that this was her most memorable performance. The show gained enormous popularity and praise from critics. From January 9, 2000, to May 14, 2006, a total of 151 episodes were shown throughout the course of 7 seasons on “Fox.”

With her part in “Malcolm in the Middle,” Jane was able to make the viewers laugh. She graced the cast of this sitcom, which also featured Bryan Cranston, Christopher Masterson, Justin Berfield, Erik Per Sullivan, James Rodriguez, and Lukas Rodriguez in addition to Frankie Muniz, who portrayed the show’s title role. The series, which was syndicated globally, was chosen by Alan Sepinwall of “HitFix” as one of the top ten programs in Fox history.

By playing “Lois” in “Malcolm in the Middle,” Jane not only elevated her notoriety to new heights but also garnered numerous honors for her outstanding performance, including a “Satellite Award” for “Best Actress – Musical or Comedy Series” in 2003. In addition, she received nominations for two Screen Actors Guild Awards, three Golden Globe Awards, and seven Emmy Awards (one for each of the seven seasons).
Between 2001 and 2010, she provided the voice of “Judge Constance Harm” for 8 episodes of the American animated sitcom “The Simpsons.”

She co-starred with Christopher Lloyd in the 2015 American indie drama “The Boat Builder.” On November 6, 2015, at the 30th “Fort Lauderdale International Film Festival,” the movie received its global debut. Jane has also appeared in the 2016 films “Wolves at the Door” and “CHiPs” (2017). In the upcoming American drama “6 Balloons,” which is slated for release on March 12, 2018, she can be featured in the role of “Gayle.”

From August 15, 1992, through October 2010, she was wed to American actor and political activist Bradley Whitford. Frances Genevieve, George Edward, and Mary Louisa are their three children.
Jane frequently participates in philanthropic endeavors and has done so with her ex-husband Whitford in the past. She established “Clothes Off Our Back,” a charity that auctions off celebrity clothing to benefit children’s organizations.