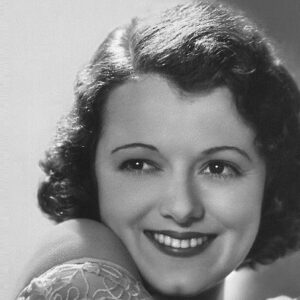 Janet Gaynor was an American actress who appeared in films, on stage, and on television. She was the first woman to win the Academy Award for Best Actress. She began her career as an extra in shorts and silent films and quickly went to prominence as one of the era’s most popular female actresses. Unlike many of her predecessors, Janet Gaynor seamlessly moved to talkies with the arrival of sound in pictures. She was taught to sing and dance as a youngster by her father, a theatrical painter. She began participating in school plays as a child, blessed with an innate affinity for acting. As a youngster, she had an interest in acting and made her cinematic debut in the bathing-beauty two-reeler ‘All Wet.’ Soon after, she began appearing as extras in films, capturing Hollywood’s attention with her innocent appearance and wide eyes. There was no going back once she began landing big roles in feature films. The crowd adored her childlike charm, which resulted in her being stereotyped as a charming child-woman. When silent films gave way to talkies, she seamlessly transitioned and remained one of the era’s most sought-after female performers. She became an adept oil painter following her retirement from the silver screen.

Laura Augusta Gainor was born on October 6, 1906, as one of two daughters of Laura (Buhl) and Frank De Witt Gainor. When she was a youngster, her father, a theatrical painter, and paperhanger began training her how to sing, dance, and perform acrobatics.

Performing on stage came easy to her, and she frequently acted in school plays as a child. In 1914, after her parents divorced, her mother remarried Harry C. Jones.

She graduated from San Francisco Polytechnic High School in 1923. During this time period, she considered a career in acting but lacked confidence. Her mother and stepfather encouraged her to pursue acting.
She attended the Hollywood Secretarial School and also worked odd jobs to supplement her income. By this time, she was also visiting studios in pursuit of an acting role.

Her career began as an extra in short films and silent pictures. On her stepfather’s recommendation, she used the screen name, Janet Gaynor. Following a streak of short film appearances, she began landing feature picture roles. She gained critical acclaim for her portrayal of Anna in the drama film ‘The Johnstown Flood’ (1926).

Petite, wide-eyed, and endearing, she radiated a childlike innocence that soon won her fans. She acted in numerous other films following the success of ‘The Johnstown Flood’ in 1926, including ‘The Shamrock Handicap,’ ‘The Blue Eagle,’ ‘The Midnight Kiss,’ and ‘The Return of Peter Grimm.

By 1927, Janet Gaynor was a rising star. That year, she collaborated with Charles Farrell for the first time in ‘7th Heaven,’ launching a long-running and fruitful partnership between the two. The pair quickly established themselves as a popular on-screen couple, appearing together in 11 other films.

In the late 1920s, the sound was introduced to feature films. While the majority of silent-era performers struggled to sustain their lucrative careers in the altered environment, Gaynor made the move to talkies with ease. She appeared in three part-talkies during this period: ‘Four Devils’ (1928), ‘Christina’ (1929), and ‘Lucky Star’ (1930). (1929).

In the early 1930s, she was a popular leading lady and one of Hollywood’s top box office draws. Due to her charming, wholesome look, she was frequently likened to Mary Pickford. She participated in remakes of two Pickford films, ‘Daddy Long Legs (1931) and ‘Tess of the Storm Country’ (1932). (1932).

Later in life, she developed into an outstanding oil painter and gained a widespread reputation for her vegetable and floral works. Between 1975 and February 1982, she staged four exhibitions in New York, Chicago, and Palm Beach under the Wally Findlay Galleries banner. Additionally, she sold almost 200 paintings.

Gaynor produced one of her best performances as the wife of a philandering man who plots to murder her in the romantic drama film ‘Sunrise: A Song of Two Humans.’ The film, directed by F. W. Murnau of Germany, was a commercial and critical success.

Janet Gaynor starred in the film ‘Street Angel’ as Angela, a passionate young woman who resorts to unlawful means of earning money to assist pay for her ailing mother’s treatment. It was one of three films for which she won an Academy Award for Best Actress in 1929, alongside ‘Sunrise’ and ‘7th Heaven.’

Janet Gaynor was married three times. Her first marriage, in 1929, to attorney Jesse Lydell Peck, was brief and ended in divorce in 1933.

In 1939, she married MGM costume designer Adrian and they had a son. Adrian passed away in 1959.
She married theater producer Paul Gregory, a lifelong acquaintance, in 1964 and stayed married to him until her death.

In 1982, Gaynor was engaged in a terrible vehicle accident with her husband Paul Gregory, actress Mary Martin, and Martin’s manager Ben Washer. She endured a number of terrible injuries and never recovered completely. Her health deteriorated in the months following the accident, and she died on September 14, 1984, following a pneumonia hospitalization.

Janet is one of the wealthiest film actresses and is ranked among the most popular film actresses. Janet Gaynor’s net worth is estimated to be $1.5 million, based on our analysis of Wikipedia, Forbes, and Business Insider.