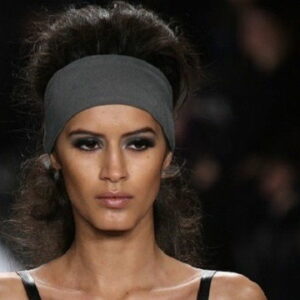 Even though she is just starting out, Jaslene Gonzalez is best known in the United States as a top Latina fashion model. Jaslene became famous all over the world when her stunning beauty won her the top prize on a reality TV show. However, she is most proud of her Puerto Rican roots and the fact that she grew up in a big, close-knit family in Chicago. As a young girl, Jaslene and her aunt would compete in local beauty pageants. She was interested in fashion from a young age. Her large family was very close to her, and on the weekends, everyone would get together at her grandmother’s house. Jaslene was taught by a Latina fashion designer in her town how to be a model when she was in high school, but her career didn’t really take off until she was on national TV. As one of only a few Latina celebrities in the U.S., Jaslene has worked hard to promote her culture and heritage while on assignment around the world. After almost dying from domestic violence when she was a teenager, Jaslene is proud to be a role model and advocate for people who have been abused in a relationship. Jaslene is a beautiful young woman who is still in her prime. In the world of fashion and modeling, she has a very bright future ahead of her.

Jaslene was born on May 29, 1986, to a Puerto Rican father and a Latina mother. She has two younger brothers and one younger sister. Jaslene has a very big extended family. One of her aunts is only a week older than her, and Jaslene calls her her “twin.”

She grew up in the Humboldt Park neighborhood of Chicago. When she was 12, she took salsa, hip hop, and merengue dance lessons at her grandfather’s dance studio.
She didn’t have her quinceanera until she was 16 because she didn’t want it to compete with her aunt’s party. More than 200 families and friends came to Jaslene’s Sweet 16/quinceanera party.

As a child, Jaslene’s whole family would get together every Sunday at her grandmother’s house. Her grandfather started a dance group for kids in Chicago called “Viva La Gente,” where Jaslene danced.
Jaslene went to Chicago’s Notre Dame High School for Girls, where she called herself a “weirdo.” She has loved modeling since she was 14 years old.

Jaslene watched the first season of “America’s Next Top Model” when she was 16 years old. She told her mother that she wanted to compete on the show one day.

Michelle Gomez, a fashion designer in Chicago, inspired Jaslene and helped her get a job with Avant-Garde Models when she was 16 years old in 2002.

In 2003, when Jaslene was a senior in high school, she started dating her first serious boyfriend. In 2005, when Jaslene tried to break up with him, her boyfriend threatened to kill himself and did other bad things to her.

Before she started modeling full-time in 2006, Jaslene worked for a short time as an online college admissions counselor. She was a contestant on “America’s Next Top Model” that same year, but she didn’t make it to the final round.

In May 2007, Jaslene won “America’s Next Top Model.” She was the first Latina to win the competition.
In July 2007, she broke up with her long-term boyfriend. This was the first time she told the public that she had been abused at home.

Jaslene started out as a supermodel. She was on the covers of Faces, EH!, Marie Claire, Seventeen, Latina, Elle, Vogue India, Scene, Time Out, Vanidades, Us Weekly, Hombre, New York Post, In Touch Weekly, Splendor, and JamRock.

Jaslene was in the movie “Nothing Like the Holidays” in 2008.
In 2009, she was in the video for Magic Juan’s song “Baby Come Back.” She took part in season 6 of “Project Runway” that same year.

In 2010, Jaslene was a guest judge at the beauty pageant “Miss Malaysia World.” In November of the next year, she was the host of Macy’s Thanksgiving Day Parade.

She has also been a host and presenter for “CoverGirl TV” more than once, and she has been on a number of talk shows, including “Live with Regis and Kelly.”

In 2007, America’s Next Top Model was given to Jaslene Gonzalez. She was the first Latina to win the title.

On May 16, 2007, Jaslene was named the winner of the eighth season of “America’s Next Top Model.” In the same year, she was nominated for the “Teen Choice Awards” in the category of Female Reality/Variety TV Star.

Jaslene has been with other people since her first relationship, which was abusive, but she is currently single.
As a famous Latina, Jaslene continues to be a role model for the people in her community and a source of inspiration for young women who have been abused at home.
Jaslene works for the “National Domestic Violence Hotline” to raise awareness about violence and teen dating.

Jaslene Gonzalez is a model and TV host who is Puerto Rican and American. She has a net worth of $1 million. She is best known for winning cycle 8 of America’s Next Top Model.

This well-known model is known as the “Cha Cha Diva.”

As a young girl, this famous model would practice posing in front of the mirror and hang collages of other supermodels on her bedroom walls.
This well-known person thinks that God gives her another chance to be a better person every day.