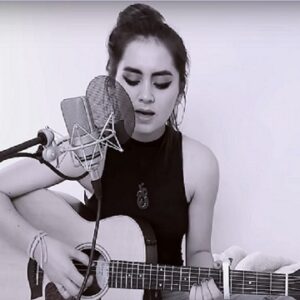 Jasmine Thompson is an English singer-songwriter who has what you may call a precocious talent. With millions of followers worldwide, she has established herself at the age of 16 as an experienced and talented performer. She has released two studio albums, three extended plays, and countless singles so far in what seems to be a lengthy and distinguished music career.

Unsurprisingly, YouTube, the greatest “talent agent” of our time, found Jasmine Thompson. She began performing famous singers’ songs at the age of 11, and her ability to switch between genres and performers with ease rapidly gained her a following.

However, these weren’t just rote performances of the songs; rather, they were distinctly creative and deliciously invigorating renditions that heralded the entry of a true talent. Jasmine uploaded a cover of Passenger’s “Let Her Go” to YouTube in the middle of 2013. In many ways, this was a game-changer.

She became an internet sensation thanks to the song, which as of late 2016 had had up to 32 million views, and it also served as the catalyst for her professional singing career. Her debut album, “Bundle of Tantrums,” which featured both her original compositions and covers, was released in September 2013. Released in the same month, her cover of Chaka Khan’s “Ain’t Nobody” went on to peak at No. 32 on the UK singles chart and was used in a Sainsbury’s advertising campaign.

Why Jasmine Thompson Is So Unique

The fact that so many of Jasmine’s covers went on to dominate the music charts and, in some cases, outperformed the originals is an intriguing part of her career. That should be enough to demonstrate what a powerful performer she is.

She also has a better understanding of the foundations of music than many of her colleagues do. She was interested in music from an early age and was just eight when she began piano lessons. She may be able to sing in a variety of genres due to a mix of her natural skill, good upbringing, and perseverance.

The debut EP of Jasmine’s career, “Under the Willow Tree,” was published in late 2013. Her second album, “Another Bundle of Tantrums,” was released in April 2014 and reached No. 126 on the UK Albums Chart. The trailer for BBC’s “EastEnders” featured her cover of R.E.M.’s “Everybody Hurts.”

High-profile projects and tours followed her rise in fame; notable projects include the 2014 EDM smash “Sun Goes Down,” which she worked on with German singer Robin Schulz.

When Jasmine signed with Atlantic Records in 2015, it marked a significant turning point in her burgeoning career. The same year, she released “Adore,” her debut single with the label, which went viral, especially in Europe.

Following the release of the “Adore” EP, German producer Felix Jaehn and the duo remixed Chaka Khan’s “Ain’t Nobody,” which went on to become a global smash.

The remix climbed within the top ten charts in Finland, France, Belgium, Switzerland, Romania, Sweden, and Denmark in addition to being the number one song in Germany, Israel, Austria, the Netherlands, and Hungary. If anything, this served as evidence of Jasmine Thompson’s meteoric rise from internet sensation to global superstar in just three years!

Jasmine was raised in Central London and was born there. Her parents supported her musical aspirations from a young age. She started playing the piano at a young age and started taking music lessons, along with her brother Jed. Her parents deserve praise for recognizing her talent at a young age; in fact, her mother guided her when she first started uploading videos to YouTube at the age of ten.

There have been drawbacks to fame. Jasmine had to be home-schooled, but the singer claims that this was not too bad because she already had pals who she is still close to today. Jasmine has become wiser than her years as a result of her early global travel, as evidenced by the way she carries herself. She enjoys going on vacation and meeting new people, both of which have helped her grow as a songwriter.

Jasmine acknowledges that her hectic schedule has prevented her from having some of the more “typical” things that most girls her age desire and that she is currently concentrating on creating more original songs. She admits that she has never been in a committed relationship before, and her number-one single, “Adore,” is about the thing she loves most in the world: music.

In an era where the majority of the top songs on the charts are essentially breakup songs, it is unusual to see an artist write a love letter to music. It comes as no surprise that music adores Jasmine Thompson just as much and will do so for many years to come. Facts On her mother’s side, Jasmine is half Chinese, while on her father’s, she is half English.

One of the wealthiest and most well-known pop singers is Jasmine Thompson. Our study of Jasmine Thompson’s net worth from sources including Wikipedia, Forbes, and Business Insider indicates that it is roughly $1.5 million.