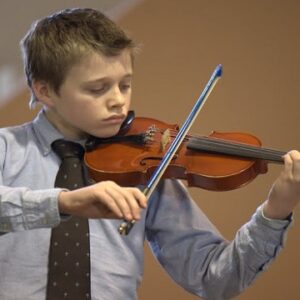 Jason Michael Duggar is a reality television star and a member of the well-known Duggar family. He is the family’s 12th kid and made his debut appearance on the Duggars’ family show “14 Children and Pregnant Again” in 2008, when he was eight years old. His adorable features and appearance on the show soon made him a little sensation. The show aired on TLC for seven years, and the title was eventually changed to “19 Kids and Counting” before it was cancelled in 2015. Jason has always been a part of the Duggar family’s show, and he is a well-known and well-liked character. Jason fell down an Orchestra pit during one of the episodes of “19 Kids and Counting,” shattered his jaw, damaged his two front teeth, and severely hurt his leg. The mishap drew even more attention from the Duggars’ family show’s viewers. Jason is well-known for his amusing and compassionate demeanor, which is one of the main reasons for his success. This reality TV star has been a celebrity since he was a child, which has made him more responsible in his life. Following the cancellation of the “19 Kids and Counting” show in May 2015, a spin-off show starring the Duggar family called “Counting On” began airing in December 2015, focusing on the family’s newlywed members.

Jason Duggar’s career began when he was featured in his family’s reality show “14 Children and Pregnant Again.” He was an integral part of the show “19 Children and Counting” until its conclusion, and he can now be seen in “Counting On,” though the show does not focus on the non-wed younger members of the family. Jason’s career has gotten off to a terrific start as a reality TV star, and it will be interesting to watch how he leverages his celebrity to further his profession in the future.

Jason Duggar is renowned in the Duggar family for being the calm and gentle person. He’s never been one to get involved in squabbles. Jason’s parents once publicly chastised him for not kissing even once in his 16-year life; while Jason quietly absorbed the taunt, his followers seized the opportunity to condemn his parents for degrading Jason. Jason has recently purchased a home with the assistance of his father. However, the house is in poor condition and does not appear to be the home of a famous figure who has been a celebrity since the age of eight.

Jason Duggar was born on April 21, 2000, in Arkansas to Jim Bob and Michelle Duggar. He is the 12th child of his parents, with a total of 18 siblings. Jason’s life has always been in keeping with his family ideals and constraints, having been raised in a conservative Christian family with 18 additional siblings. Jason, like all of the Duggar children, is educated at home.

The public disclosure that his older brother was responsible for assaulting his younger sisters and other females while he was a teenager took a toll on him, as it did on the rest of the family. However, with the show “Counting On” attracting huge viewership in every episode, things in his family have started to look up again.

Jason is one of the wealthiest reality stars and one of the most popular. Jason Duggar’s net worth is estimated to be $1.5 million, according to Wikipedia, Forbes, and Business Insider.