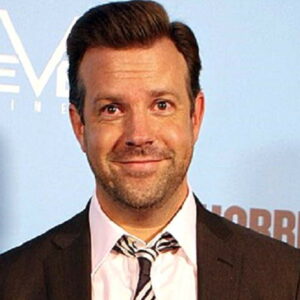 Jason Sudeikis is an actor, comedian, producer, and screenwriter from the United States. He’s been in films like “Horrible Bosses,” “We’re the Millers,” and “Colossal.” He has appeared in a number of well-known television shows. He’s also done voice work for films including ‘Epic’ and ‘The Angry Birds Movie,’ in which he voiced characters. Sudeikis began his career as a stand-up comedian in Kansas City, where he wowed audiences and quickly rose through the ranks of some of the most well-known comic groups of the time. He had attended one of the most well-known comedy training institutes in the United States, which proved to be quite beneficial to his hilarious career. He was an important member of the ‘Saturday Night Live’ crew. Sudeikis’ comic timing has landed him gigs on TV shows including “30 Rock” and “The Last Man on Earth.” His ability to capture one’s attention has won him hosting gigs for events like the ‘MTV Movie Awards’ and ‘WWE Raw.’

Daniel Jason Sudeikis was born in Fairfax, Virginia, to Daniel Joseph Sudeikis and Kathryn Sudeikis on September 18, 1975. His father worked as a top executive for a corporation, while his mother worked as a travel agent. Sudeikis’ mother is the sister of actor George Wendt.
When Jason Sudeikis was a child, his family relocated to Overland Park, Kansas. He attended ‘Brookridge Elementary School’ and ‘Holy Cross Cathedral,’ among other schools. In 1990, he began his high school studies at ‘Jesuit Rockhurst High School,’ but later transferred to ‘Shawnee Mission West High School.’
Sudeikis’ work as a comedian was influenced by the state of Kansas. As an artist, the state has had a great impact on him, and he frequently brings up references to it throughout his stand-up routine. Sudeikis began his career as a stand-up comedian in his hometown of Kansas. He began his career as a stand-up comedian at Kansas City’s ‘ComedySportz.’ Following his success at ‘ComedySportz,’ he relocated to Chicago, where he enrolled at the renowned ‘ImprovOlympic’ theatre to further his skills.
‘The Second City Touring Company,’ led by Jason Sudeikis, was formed. He rose to prominence as one of the founding members of ‘The Second City Las Vegas’ in the early 2000s. He quickly established himself as one of the most popular comedians of the period, and the producers of ‘Saturday Night Live’ took notice.
Jason Sudeikis joined the cult classic show ‘Saturday Night Live’ as a writer in 2003 and stayed with the show for a decade. He progressed from being a writer to a performer over his time with the show, and he became one of its most essential members. He was eventually accorded repertory status.
Sudeikis debuted on television in 2007 as a recurrent character on the renowned comedy series ’30 Rock.’ He was cast in Cameron Diaz’s ‘What Happens in Vegas’ the following year. Sudeikis also appeared in the internet show ‘The Line’ that same year. Meanwhile, he gave his voice to the critically acclaimed computer game ‘Grand Theft Auto IV.’
Jason Sudeikis had a very fruitful year in 2010, landing a role in the Gerard Butler and Jennifer Aniston-starrer ‘The Bounty Hunter.’ In 2011, he starred in the comedy film ‘Horrible Bosses,’ in which he played a major role. In the same year, he co-starred with Owen Wilson in another comedy, ‘Hail Pass,’ and hosted the ‘MTV Movie Awards.’
Jason Sudeikis was cast in a crucial part in ‘Eastbound and Down’ in 2012. His performance of the series’ recurring role was well received. Sudeikis starred in ‘Horrible Bosses 2,’ a sequel to the 2011 film ‘Horrible Bosses,’ two years later. At the box office, the sequel was a hit.
He next appeared in the 2016 romantic comedy film ‘Mother’s Day,’ opposite Julia Roberts and Jennifer Aniston. In the same year, he voiced ‘Red’ in the computer-animated comedy film ‘The Angry Birds Movie,’ which was based on the same-named video game.
Sudeikis starred alongside Matt Damon in the science fiction comedy ‘Downsizing’ in 2017, after portraying the role of ‘Zorn’ in the animated TV series ‘Son of Zorn.’ Following that, he appeared in films such as ‘Driven’ (2018) and ‘Booksmart’ (2019).
Sudeikis returned as ‘Red’ in ‘The Angry Birds Movie 2,’ a sequel to the 2016 film ‘The Angry Birds Movie,’ in 2019. He’ll be seen in films such as ‘El Tonto’ and ‘Till Death.’

Jason Sudeikis has starred in a variety of movies and television shows. He’s also given some absolutely unforgettable performances. Despite his cinematic efforts, his participation to ‘Saturday Night Live’ is still his most significant contribution. Sudeikis was a key part of ‘Saturday Night Live’ for a decade, beginning in 2003, during which time he helped the show become extremely successful.

In 2004, Jason Sudeikis married actress Kay Cannon. The marriage, however, ended in divorce six years later. The couple does not have any children.
Sudeikis became engaged to actress Olivia Wilde in 2013 after a love relationship with her. They have a daughter named Daisy Josephine and a boy named Otis Alexander.

Jason Sudeikis’ net worth is reported to be $10 million.