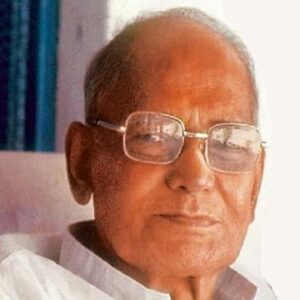 Jayaprakash Narayan was a political activist and leader for Indian independence. Popularly known as JP or Lok Nayak (“The People’s Hero”), he was imprisoned for his participation in the civil disobedience movement against British rule in India. Born in Bihar, British India, he was deeply influenced as a child by reading about the courage and valor of Indian monarchs. He moved to the United States to pursue his graduate education. His struggles to make ends meet in a foreign country opened his eyes to the challenges faced by the working class. After reading Das Kapital by Karl Marx, he felt convinced that Marxism was the best approach to alleviate the suffering of the masses. He became a staunch Marxist and, upon his return to India, joined the Indian National Congress at Jawaharlal Nehru’s invitation. Following the country’s independence in 1947, he remained a significant figure in Indian politics and achieved new heights of popularity in the 1960s. Despite his advanced age, he played a crucial part in the popular people’s movement known as the Bihar Movement in the 1970s. In 1999, he was posthumously awarded the Bharat Ratna.

Jayaprakash Narayan was born on 11 October 1902 in a village in the Saran region of Bihar, British India, to Hindu Kayastha parents Harsu Dayal Srivastava and Phul Rani Devi. He was their fourth child. His father was a junior official in the State government’s Canal Department.

At the college in Patna, where he studied, he developed a reading habit. In addition to reading ‘Saraswati,’ ‘Prabha,’ and ‘Pratap,’ he also read ‘Bhagwad Gita. He graduated in 1918, having excelled in his studies as a remarkable student. He was awarded a Patna College merit scholarship by the District.

In 1922, he came to the United States for graduate school. To finance his schooling, he worked a variety of odd jobs, and these experiences made him aware of the challenges faced by the working class.
He initially enrolled at Berkeley before transferring to The University of Iowa after Berkeley’s tuition prices quadrupled. Again, he was compelled to transfer to numerous universities.

Despite the obstacles he encountered in the United States, he was able to study his favorite subject, sociology, with the assistance of Professor Edward Ross. During this time, he was exposed to the works of Karl Marx, which strongly impacted him.

He embraced Marxism and immersed himself in the works of an Indian scholar and Communist theorist M. N. Roy. He also read Lenin, Trotsky, Plekhanov, and Rosa Luxemburg’s works.

Jayaprakash Narayan returned to India in 1929. Jawaharlal Nehru, impressed by his principles, urged him to join the Indian National Congress, which he accepted. Also charmed by the young man, Mahatma Gandhi took him under his wing and became his mentor.

He became extremely involved in the expanding Indian independence movement. In 1932, he was arrested and incarcerated for participating in civil disobedience against British rule. During his incarceration, he met Ram Manohar Lohia, Minoo Masani, Achyut Patwardhan, Ashok Mehta, Yusuf Desai, and other national leaders, which fueled his nationalist zeal.

After his release, he was instrumental in establishing the Congress Socialist Party, a left-wing faction inside the Congress Party, and was appointed its General Secretary.

He intensified his role in the Indian freedom struggle and was imprisoned again by the British in 1939 for opposing Indian participation in World War II on Britain’s side. He successfully eluded capture in a daring manner.

Mahatma Gandhi initiated the Quit India Movement in 1942. During this period, Narayan, together with the likes of Suraj Narayan Singh, Gulab Chand Gupta, and Ramnandan Mishra, devised a plan to launch a clandestine freedom struggle. However, the British regained Narayan in 1943.

In 1946, he was ultimately released. By this time, he had become so committed to the freedom cause that he attempted to convince Congress leaders to embrace a more militant strategy against the British.
In 1947, India attained its freedom. In 1948, he and several other socialists left the Congress Party. A few years later, in 1952, he played a significant role in the formation of the Praja Socialist Party.

Soon after, he grew disillusioned with party politics and decided to devote his life to the Vinoba Bhave-founded Bhoodan Yajna Movement. In the late 1950s, however, his interest in politics was reignited, and he once again engaged in political activity.

In the late 1960s, he achieved significant political prominence. The Nav Nirman Andolan movement of Gujarat urged Jayaprakash to lead a peaceful agitation in 1974 after the country experienced excessive prices, unemployment, and other concerns.

At the time, he was in his seventies and led a quiet parade in Patna. The march was lathi-charged, yet nothing could dampen the zeal of the patriots. On June 5, 1974, he addressed a big assembly at Gandhi Maidan and urged for a complete revolution. The culmination of these events was a popular people’s movement known as the Bihar Movement.

Together with V. M. Tarkunde, he founded the Citizens for Democracy in 1974 and the People’s Union for Civil Rights in 1976 in order to maintain and defend civil liberties. He was a harsh critic of the undemocratic government of Prime Minister Indira Gandhi.

Jayaprakash Narayan led the Bihar Movement, which was started by Bihar students in 1974 to protest the corruption of the Bihar administration. Also known as the Total Revolution Movement and the JP Movement, it later became a kind of satyagraha against the central administration of Prime Minister Indira Gandhi.

Jayaprakash Narayan married Prabhavati Devi in 1920. At the time of their marriage, his bride was only 14 years old, but she went on to become a notable freedom fighter and Gandhian in her own right.

Prabhavati was extremely self-reliant and relocated to Gandhi’s ashram when Narayan went to the United States for graduate school.
In his later years, he suffered from kidney failure, diabetes, and heart issues, and he passed away on October 8, 1979.

Jayaprakash is one of the wealthiest and most well-known politicians. According to our investigation, Wikipedia, Forbes, and Business Insider, Jayaprakash Narayan has an estimated net worth of $1.5 million.