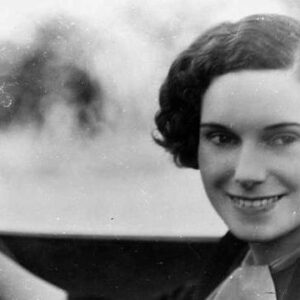 Jean Gardner Batten, known as ‘Hine-o-te-Rangi’ or ‘Daughter of the Skies,’ was a spectacular New Zealand pilot. She became famous around the world for her multiple world-record-breaking solo flights. During the 1930s, she was one of the most well-known New Zealanders, with her heroic and dangerous aviation adventures featured in several newspapers and newsreels around the world. She achieved a new women’s record when she flew solo from England to Australia in 14 days, 22 hours, and 30 minutes in 1934. She was the first woman to fly solo between Australia and England, as well as between England and Argentina. In 1936, she set a new world record by flying solo from England to New Zealand. She had set solo flight records from England to Australia, Australia to England, and England to Brazil. During her lifetime, Batten received numerous honors and prizes. She was given the title of ‘Commander of the British Empire’ (CBE) in 1936, as well as the ‘Cross of Chevalier from the French

She was born to Frederick and Ellen Batten on September 15, 1909, in Rotorua, New Zealand, as the only daughter of three children.
Batten began attending Melmerley Ladies School in Parnell when she was five years old after her family relocated to Auckland in 1913.

During the ‘First World War,’ her father, a dental surgeon, volunteered to join the New Zealand Expeditionary Force and was assigned to the Western Front.
The family’s financial situation was affected by her father’s absence, resulting in various hardships. They were forced to live in a variety of inexpensive and shabby places, and she was eventually sent to a public school.

Her father returned to Auckland in 1919, but her parents’ relationship became difficult, and they split up in 1920.
She moved in with her mother Ellen, with whom she formed a strong bond and who encouraged and supported her in her quest to become a good pilot.

She and her mother initially went to Howick and enrolled in a local convent school, but they eventually returned to Auckland in 1922.

In 1924, she enrolled in a boarding school for girls in Remuera, where she studied ballet and piano with the goal of becoming a professional performer in both.

When she developed a liking for flying in the late 1920s, her career goal shifted dramatically. It was the start of an era marked by widely publicized record-setting and record-breaking flights by numerous pilots. Charles Lindbergh’s non-stop solo flight across the Atlantic Ocean inspired her.

Her mother, who supported her, took her to Sydney for a vacation in 1929 and arranged for her to fly in the tri-motor ‘Southern Cross’ with Charles Kingsford Smith, an Australian pilot.
She moved to England with her mother in 1930 and became a member of the ‘London Aeroplane Club.’

She needed money to get her private and commercial pilot’s licenses, so she borrowed £500 from a young New Zealand flyer named Fred Truman, who was serving in the ‘Royal Air Force’ and wanted to marry her. By 1932, she had both of her licenses, but she never looked back at Truman after that. She also took up aviation maintenance and repair studies.

Victor Dorée became her friend, and as a result of their friendship, Dorée borrowed £400 from his mother so that Batten could acquire a Gipsy Moth biplane that had previously belonged to the Prince of Wales and had passed through many hands. “Raising money by exploiting her relationships with men was a pattern that remained throughout her flying career,” according to NZ History Online.

She sought to beat English pilot Amy Johnson’s 1912-day solo flight from England to Australia as the women’s record. Her first two tries were unsuccessful.

The first attempt, in April 1933, saw her strike two sandstorms over Iraq, resulting in engine failure and extensive damage to the plane. Dorée was unable to persuade her to buy another plane, so she approached the ‘Castrol Oil Company.’ For her, the latter paid £240 for a second-hand Gipsy Moth.

She attempted a second time in April 1934. She ran out of petrol on the outskirts of Rome this time and had to make a nighttime landing. She flew the plane to London after fixing it.
Her fiancé, stockbroker Edward Walter, donated her the lower wings of his own plane, and she was ready for her third attempt.

She set out on May 8, 1934, and flew solo from England to Australia in 14 days, 22 hours, and 30 minutes, beating Amy Johnson’s previous record by more than four days.
Her memoir, ‘Solo Flight,’ was published in 1934 by ‘Jackson and O’Sullivan Ltd.’
She then purchased G-ADPR, a Percival Gull Six monoplane.

She was the first woman to fly back from Australia to England in 1935, completing the journey in 17 days and 15 hours. She was the first woman to fly from England to South America in the same year. She flew from England to Brazil in 61 hours and 15 minutes, breaking the global record. It earned her the ‘Order of the Southern Cross,’ making her the first person outside of Royalty to do so.

Her other accomplishments in 1935 included being the first woman and the fastest to traverse the South Atlantic Ocean in roughly 13 hours and 15 minutes.
Her record-breaking streak continued in 1936 when she set a new world record by flying solo from England to New Zealand in 11 days and 45 minutes, including two and a half days in Sydney.

Her flying escapades, however, were cut short by the ‘Second World War.’ Despite the fact that her plane was in operation, she was not permitted to fly it. She later became involved in many initiatives in England to gather funding for guns and planes.

With the exception of a few public appearances after the war, she essentially disappeared from public life.

In her later years, she lived a solitary existence. She moved around with her mother, who died in 1965 on the Spanish island of Tenerife.

Despite having a number of love relationships, Batten never married.
Batten was injured by a dog bite in 1982 while residing in Majorca, Spain. Because she refused treatment, the illness quickly spread, causing complications and eventually her death on November 22, 1982.

On January 22, 1983, she was buried in an unmarked tomb on the island of Majorca, where she was formerly a famed aviator.

After a period of time when she did not communicate with her pals, they became concerned about her well-being. For a short time, a perfunctory investigation was also started. The world only learned about her death five years later, when Ian Mackersey, a writer and documentary filmmaker, discovered it while searching for her in Majorca.

Jean is one of the wealthiest pilots and one of the most popular. Jean Batten’s net worth is estimated to be $8 million, according to Wikipedia, Forbes, and Business Insider.