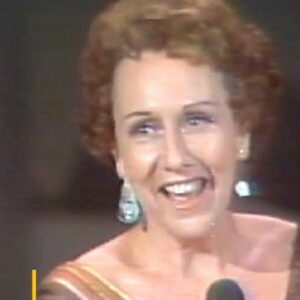 American actress Jean Stapleton was well-known for playing supporting roles in stage, screen, and television productions. Her most well-known performance was as “Edith Bunker,” the patient, obedient wife of “Archie Bunker,” in the television series “All in the Family.” She received numerous honors for this outstanding performance. Her son, her brother, and her uncle all worked in the entertainment business. Stage plays were where she started her acting career; later, she transitioned to TV and movies. Although she had never played a leading role, she was a skilled performer. She sang in several musicals and played a variety of characters. She was an advocate for women’s rights and served as a commissioner at the National Women’s Conference in Houston, Texas, during “International Women’s Year.” William Putch, who oversaw a summer stock theater in Pennsylvania, was married to Stapleton. Both of their surviving children, a son and a daughter, work in the entertainment sector. Stapleton passed away at the age of 90 from natural causes.

She went to New York City’s “Wadleigh High School.” After earning her degree in 1939, she enrolled in “Hunter College.” Stapleton continued taking theater classes at night after completing her studies by working as a secretary and typist.

Later, she adopted her mother’s maiden name and changed her name. Her theater actor older brother had changed his name to “Jack Stapleton.” Her cousin was the actor Betty Jane Watson.

She performed with the “American Actors’ Company” while completing a work-study apprenticeship there. She served as Shirley Booth’s understudy in the touring company of “Come Back, Little Sheba.” In “Harvey,” she also acted opposite Frank Fay.

Stapleton began her acting career in 1941 with summer stock productions at the Peaks Island, Maine, “Greenwood Play House.” Her first performance in New York was in the “Off-Broadway” play “American Gothic.”

With Jose Quintero’s 1953 production of Jane Bowles’ play “In the Summer House,” she made her “Broadway” debut. She had one of the most successful “Broadway” musicals with “Damn Yankees” (1955).

She performed several melodic musical pieces. She was a member of the original cast of the Broadway production Bells Are Ringing in the 1950s. She wrote the songs “If a Girl Isn’t Pretty” and “Find Yourself a Man” in the 1960s and performed with Barbra Streisand in “Funny Girl.”

She performed in other “Broadway” plays besides her musicals, such as Eugene Ionesco’s farcical “Rhinoceros” in 1961. In 1987, she performed in a revival of “Arsenic and Old Lace.”

In the film adaptations of “Bells Are Ringing” and “Damn Yankees” (1958), Stapleton played the same characters again (1960). She also appeared in the 1961 movie “Something Wild,” and in the thriller “Klute,” starring Jane Fonda and Donald Sutherland, she played a secretary.

In numerous TV programs and series, she played guest roles, including “Starlight Theatre,” “Dr. Kildare,” “Woman With a Past,” “The Patty Duke Show,” “My Three Sons,” “Car 54, Where Are You?,” and “The Defenders.” She played “Rosa Criley” in the psychiatric medical drama “The Eleventh Hour” (1963).

‘Something Wild’ (1961), ‘Up the Down Staircase’ (1967), and Norman Lear’s comedy ‘Cold Turkey’ (1971) are just a few of her earlier TV and feature films. She appeared in the educational series “Beakman’s World” and the television series “Scarecrow and Mrs. King.”

When producer Norman Lear asked her to try out for the part of “Edith” in “All in the Family,” she had already performed in a few TV shows and “Broadway” plays. Her career benefited greatly from this significant role in her first TV series. The British television program “Till Death Us Do Part” was adapted for the American market in this series. ‘All in the Family’ initially had a very hard time drawing viewers. But it quickly gained popularity and spent five seasons at the top of the “Nielson” ratings.

Stapleton gave the role of “Edith Bunker” some lovely finishing touches, including a trotting gait, a perplexed expression, and a high-pitched nasal dialogue delivery. The following series, “Archie Bunker’s Place,” ran from 1971 to 1979 and ran until 1983. Stapleton, however, asked to be cut from the show because she was sick of playing the same character.

Then Stapleton picked a number of roles that were noticeably different from her well-known one. She made cameos in the TV shows “Murphy Brown” and “Caroline in the City.” She collaborated with Whoopi Goldberg on the television adaptation of the film Bagdad Café. She participated in the Canadian production of “Something’s Afoot,” the musical (1979). Additionally, she portrayed the title character in the television film “Aunt Mary,” which was based on a real-life event.

She and Peter Ustinov shared a starring role in the 1986 television version of “Dead Man’s Folly.” She portrayed “Julia Child” in the 1991 Off-Broadway mini-musical “Bon Appétit,” who sings the chocolate cake recipe.
She co-starred in the 1998 films “You’ve Got Mail” with Meg Ryan and “Michael” with John Travolta (1996). She played “Eleanor Roosevelt” in the 1982 television film “Eleanor: First Lady of the World.” Later, Stapleton performed the film as a solo performance and toured the nation.

Later, she performed in important roles in ‘Off-Broadway’ plays like Harold Pinter’s ‘Mountain Language’ and ‘The Birthday Party,’ as well as Mr. Foote’s ‘The Carpetbagger’s Children,’ John Osborne’s ‘The Entertainer,’ and others by John Osborne and John Osborne. Her work was greatly admired, especially in “The Birthday Party.”

Stapleton portrayed Raymond’s aunt in the well-known 1996 television series “Everybody Loves Raymond.” In Mrs. Piggle-Wiggle (1993–1995), a children’s show based on Betty MacDonald’s children’s books, she portrayed the title character.

She was regarded as one of the leading ladies in 1970s TV comedies. She is best known for playing a dim-witted, kind-hearted, and submissive housewife in the television series “All in the Family.”

Stapleton was one of the forty people chosen to serve on the “National Commission” for the commemoration of “International Women’s Year” in 1978. She had also collaborated on efforts to preserve Mrs. Roosevelt’s New York residence with screenwriter Rhoda Lerman.

She kept up with her social activities after finishing her last acting gig in 2001, particularly at the “Woman’s Research & Education Institute.” She concentrated on problems that affected women.

For her work on the television program “All in the Family,” Stapleton received the “Primetime Emmy Award” in 1971, 1972, and 1978. Two “Golden Globe Awards” were also given to her for the same series.

She was awarded an honorary doctorate in humane letters from Boston’s Emerson College in 1978. She is the recipient of a scholarship. She received inductions into the “American Theater Hall of Fame” and the “Television Hall of Fame” in 2002.

On October 26, 1957, Stapleton wed William Putch while the musical “Bells Are Ringing” was in production. He oversaw the “Totem Pole Play House,” a summer stock theater in Caledonia State Park in Fayetteville, Pennsylvania.
She lost her husband in 1983.

Stapleton passed away on May 31, 2013, in New York City, from natural causes. She passed away when she was 90 years old. On June 5, 2013, “Broadway” dimmed the marquee lights for one minute in her memory. She is survived by her son John Putch, an actor, writer, and director, and by her daughter Pamela Putch, a TV producer.

Net worth of Jean Stapleton: The American actress Jean Stapleton is worth $10 million. Jean Stapleton, sometimes known as Jean Murray, was born in New York City and received her degree from Hunter College. She started her professional acting career in the 1940s, performing in summer stock theatrical productions before moving on to Off-Broadway plays and ultimately Broadway. She performed on Broadway in productions of “Damn Yankees,” “Funny Girl,” “Bells Are Ringing,” and “Juno.” She is well known for playing Edith Bunker on the popular comedy “All in the Family.” She also appeared in guest-starring, co-starring, or recurring roles in a number of other shows and films, including “Robert Montgomery Presents,” “Bagdad Café,” “Willy Wonka & the Chocolate Factory,” “Michael,” “You’ve Got Mail,” “Touched by an Angel,” “Murphy Brown,” “Everybody Loves Raymond,” and “Style and Substance.” She has two Golden Globes and three Emmys to her name. 2013 saw her retirement.