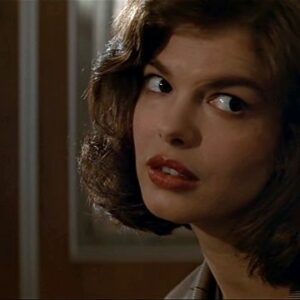 Jeanne Marie Tripplehorn is an actress who has appeared in films, television shows, and theater productions in the United States. She has been performing professionally for the past 27 years and is a brilliant thespian. In 1990, she made her Broadway debut in an off-Broadway production of John Patrick Shanley’s ‘The Big Funk.’ She was cast in her first TV role in ‘The Perfect Tribute’ a year later. Her major break came in 1992, when she got a supporting role in the film ‘Basic Instinct.’ However, it was in the film ‘The Firm’ that she was cast as the female lead for the first time, and against Tom Cruise and Gene Hackman. She worked with some of the biggest names in Hollywood during the 1990s, including Gwyneth Paltrow in ‘Sliding Doors,’ Hugh Grant in ‘Mickey Blue Eyes,’ and Julie Andrews in ‘Relative Values.’ She most recently starred as Dr. Alex Blake in the critically acclaimed police procedural crime drama ‘Criminal Minds.’

Jeanne Tripplehorn began her career as a student actress in the local television productions ‘Creature Feature’ (1982-83) and ‘Night Shift.’ She made her acting debut after completing her studies in John Patrick Shanley’s ‘The Big Funk,’ a piece described by ‘The Guardian’ as “Friends set in a self-help manual on acid.” She followed that up with a role in John Ford’s ‘Tis Pity She’s a Whore,’ in which she was joined by Val Kilmer. She also appeared in Anton Chekov’s ‘Three Sisters’ on Broadway alongside Lili Taylor and Amy Irving.

In 1991, she made her feature debut in the television movie ‘The Perfect Tribute.’ Julia was the character she played. She later worked with Ben Stiller for the first time in 1992 on the ‘Ben Stiller Show,’ appearing as The Wilson Woman / Goo in three episodes.

She co-starred in the romantic comedy ‘The Night We Never Met’ with Matthew Broderick in 1993. Sydney Pollack’s ‘The Firm,’ her following film, is still her best work to date. She played Abby McDeere, the wife of Mitch McDeere, played by Tom Cruise. The film, which was based on John Grisham’s novel of the same name, was a critical and financial success, grossing $270.2 million at the box office.

In the 1995 film ‘Waterworld,’ she played Helen, the female lead opposite Kevin Costner. The film, which was made on a massive budget ($172 million), failed to recoup its costs at the box office, and critics compared it to earlier box-office failures such as ‘Heaven’s Gate’ (1980) and ‘Ishtar’ (2001). (1987). The film, however, finally became lucrative due to home video sales and television broadcast rights.

Her career stalled after a string of disappointments, including ‘Til There Was You’ (1997), ‘Monument Ave.’ (1998), and ‘Mickey Blue Eyes’ (1999). She continued to work in independent films and play modest roles in the first decade of the twenty-first century. In 2012, she was cast in CBS’ ‘Criminal Minds’ as Dr. Alex Blake. In seasons 8 and 9, she was a series regular before departing after 48 episodes. ‘We Only Know So Much,’ directed by Donal Lardner Ward, is planned to star her.

Jeanne Ferguson was born on June 10, 1963, in Tulsa, Oklahoma, to Suzanne Ferguson and Tom Tripplehorn. Ferguson is a nonfiction author, and Tripplehorn was a member of the 1960s pop and rock band Gary Lewis & the Playboys as a guitarist. Kelly, Jason, and Daniel are her three brothers. Jeanne’s parents split when she was two years old.

She went to Edison High School before spending a semester at the University of Tulsa. She was then a member of Group 19 at the Juilliard School’s drama section in New York (1986-90). Laura Linney, another actress, was in the same class as her.

She had a six-year relationship with her ‘Reality Bites’ co-star Ben Stiller in the early years of her career. In 1999, Tripplehorn began dating Leland Orser, a character actor. A year later, on October 14, 2000, they married. August Tripplehorn Orser, the couple’s son, was born to them (born on May 22, 2002). Tripplehorn used to work as a DJ in her hometown of Tulsa.

She was set to play Mia Wallace in Quentin Tarantino’s ‘Pulp Fiction’ (1994), but Uma Thurman was cast instead.
She had to give down the role of Carrie in ‘Four Weddings and a Funeral’ due to her mother’s death just weeks before filming began (1994). In the end, Andie MacDowell was cast in the role.