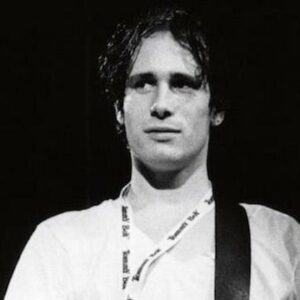 American singer-songwriter and guitarist Jeffrey Scott “Jeff” Buckley tragically gained the majority of his fame after his death. Jeff Buckley, the son of American music icon Tim Buckley, grew up surrounded by music, singing around the house and in unison with his mother. When he was 12 years old, he made the decision to pursue music. After completing his education, he spent the next six years working in a hotel and playing guitar in a number of unsuccessful bands. He worked as a session musician for almost ten years in Los Angeles before building up a sizable and devoted fan base and performing covers of different songs in Manhattan’s East Village. Following a gradual shift to performing his own original music, Buckley attracted interest from numerous record labels. All of them were declined, and he ultimately chose Columbia. His only studio album, “Grace,” was released in 1994 after a band was soon formed to surround him. While swimming naked in the Mississippi River, he drowned while working on a second album titled “My Sweetheart the Drunk.” Many of his songs have been released since his passing, and both critics and fans have praised them. He frequently appears on rankings of the best musicians in music history.

On November 17, 1966, Jeff Buckley was born in Orange, California, in the United States. Jeff’s mother Mary Guibert, a cellist and pianist, and his biological father Tim Buckley didn’t really get along before or after Jeff was born. At the age of eight, he finally got to meet his father. In 1975, Tim overdosed on drugs and died.

Along with his half-brother Corey, he was raised in Southern California by his mother and stepfather, Ron Moorhead. Due to the frequent moves, Buckley subsequently referred to his upbringing as “rootless trailer trash.”

Scott “Scottie” Moorhead was Buckley’s childhood alias, but upon Tim’s passing, he began using both his own first name and the surname “Buckley.” The members of his family continued to call him “Scottie,” nonetheless.

He grew up in a musical family. Although not a musician himself, Buckley’s stepfather was a passionate supporter of modern music, and it was via him that he first became aware of bands like Led Zeppelin, Queen, Jimi Hendrix, The Who, and Pink Floyd. He picked up the guitar when he was five years old.

He made the decision to pursue music when he was 12 years old. At the age of 13, he received a black Les Paul as his first electric guitar. He enrolled in Loara High School and joined the jazz ensemble there.
Later, he completed a year-long study at The Musicians Institute in Hollywood, California. He was 19 at the time. He enjoyed studying music theory there, while subsequently thinking of his time there as “the worst waste of time.”

As a young musician, Jeff Buckley played guitar in a number of unsuccessful jazz, reggae, roots rock, and heavy metal bands. He participated in the occasional funk and R&B studio session and toured with dancehall reggae musician Shinehead. He performed exclusively as a background vocalist at this time.
He relocated to New York City in February 1990, where he first heard Qawwali, a style of Sufi devotional music mostly from India and Pakistan. Nusrat Fateh Ali Khan won his fervent admiration, and during his “cafe days,” he performed renditions of many of Khan’s tunes.

When Herb Cohen, the former manager of his father, agreed to assist him in recording a demo of his original songs, he moved to Los Angeles. The demo, titled “Babylon Dungeon Sessions,” was created in the hopes that it would be noticed by the local music scene.

At a Tim Buckley tribute concert during this time, Buckley and guitarist Gary Lucas gave a performance. I Never Asked to Be Your Mountain, a song composed by Jeff’s father for him and his mother, was one of the songs Jeff performed. The song was Jeff’s final tribute to his deceased father.

He performed throughout New York City with Lucas’ band Gods and Monsters in late 1991 for a brief period. He gained some notoriety after the band broke up by playing at a number of clubs and coffee shops in Lower Manhattan, including the renowned Sin-é in the East Village. These performances not only helped him gain a devoted following, but also the attention of executives from record labels.

In order to promote “Grace,” which was released in 1994, he went on a world tour. He visited Australia, the United Kingdom, France, several other Western European nations, and the Scandinavian nations to perform in front of his followers there. He started a tour of the US and Canada in October 1994. He also traveled to New Zealand and Japan.

After his tour was over in 1996, Buckley began work on his second album, “My Sweetheart the Drunk.” He kept working to improve the sound because he was dissatisfied with the initial material that was recorded. The album was never finished and was released on May 26, 1998, following Buckley’s passing. Even though it wasn’t done, the critics liked it.

Midway through 1993, Jeff Buckley started working with record producer Andy Wallace on his debut album. He assembled a group with Matt Johnson and Mick Grndahl on drums and added guitarist Gary Lucas to work on the singles “Grace” and “Mojo Pin” with him. On August 23, 1994, his debut album, “Grace,” was published. It contained six songs, including “Grace” and Buckley’s rendition of Leonard Cohen’s “Hallelujah.” The record afterward went on to become a huge success all over the world.

He was posthumously nominated for a Grammy Award in 1998 for “Everybody Here Wants You,” the best male rock vocal performance.

His rendition of “Hallelujah” was numbered 259 in Rolling Stone’s list of the 500 Greatest Songs in 2004. The magazine’s 2008 edition of the 100 Greatest Singers of All Time placed Buckley at number 39.

Midway through the 1990s, Scottish vocalists Elizabeth Fraser and Jeff Buckley fell in love quickly. He made the decision to get in touch with her in 1994 after being moved by her performance of one of his father’s songs. He was about to release his sole album, “Grace,” at the time. They split up in 1995, I believe. The song “All Flowers In Time Bends Towards The Sun,” which Buckley and Fraser co-wrote, wasn’t released until the 2000s.

After arriving in Memphis earlier that day, Jeff Buckley’s band was scheduled to meet him there that evening to begin work on a potential new album. The same evening, Buckley made the decision to go swimming in Wolf River Harbor, a Mississippi River slack-water passage. He was singing the chorus of Led Zeppelin’s “Whole Lotta Love” while fully dressed, including the boots.

He had previously visited that location to go swimming. That evening, he was accompanied by Keith Foti, a roadie with his band, but he stayed on land. When he discovered Buckley had disappeared, he was busy keeping the radio and guitar they had brought with them dry. The authorities started looking for Buckley that night, but they were unsuccessful. His body was found on June 4th in the Wolf River next to a riverboat. Drug overdose was ruled out following an autopsy, and the investigators came to the conclusion that he had drowned accidentally.

Jeff Buckley had a $4 million net worth when he was alive. He was an American singer-songwriter and musician. In November 1966, Jeff Buckley was born in Orange, California, and he died in May 1997. Before releasing his lone album, Grace, he spent over a decade working as a session guitarist in Los Angeles. Grace peaked at #9 in Australia and was given a 7x Platinum certification. The album received a Gold certification in the US and peaked at #5 on the Heatseekers chart. In addition, Buckley released five live albums, the first of which, Mystery White Boy, peaked in the UK, Australia, Belgium, and France’s Top 10.

Penn Badgley, an American actor, and singer played Jeff in the 2012 movie “Greetings from Tim Buckley.”