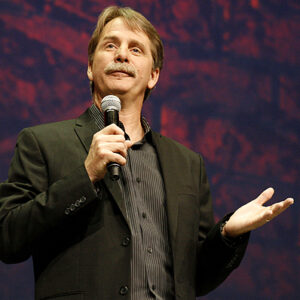 Stand-up comedian and actor Jeffrey Marshall “Jeff” Foxworthy became well-known for his “You might be a redneck” one-liners. He is a best-selling author of more than 26 novels in addition to being a comedian and television personality. Foxworthy has published six comedy albums over the course of a career spanning more than 25 years, with two of them earning multi-platinum status in the United States. He wanted to pursue a corporate career because his father was an IBM executive, but as luck would have it, he ended up taking part in the “Great Southeastern Laugh-off” at Atlanta’s “Punchline” comedy club. He decided to leave his corporate job and pursue a career in comedy as a result of his success. He is currently considered as one of the best-selling comedians and has received a Grammy nomination. He has also ventured into television on multiple occasions and debuted his own sitcom, “The Jeff Foxworthy Show.” His popularity among the general public was greatly increased by his hosting of the television programs “Are You Smarter Than a 5th Grader?” and several others. He is a part of “The Blue Collar Comedy Tour,” one of the greatest comedic tours ever, which also includes Larry the Cable Guy and Ron White.

Jimmy Abstance Foxworthy and Carole Linda had their first child, Jeff, in Atlanta, Georgia, on September 6, 1958. His father worked in a prominent position for IBM, and the family resided in a wealthy area.

He was the class clown at Hapeville High School, where he loved to make his fellow students laugh with his hilarious pranks. During his free time, he listened to the comedic performances of Bill Cosby, Flip Wilson, and Bob Newhart.
He studied computer technology at Georgia Tech in Atlanta.

He worked in mainframe computer maintenance at IBM when he first started his career. Despite working there for five years, he found that making his coworkers laugh gave him more pleasure than using the computers.
His coworkers persuaded him to take part in the “Great Southeastern Laugh-off” when Atlanta’s “Punchline” comedy club announced it in 1984. He did, and he took first place. He made the decision to leave his job and focus only on comedy as a result of this victory.

Through a succession of humorous one-liners, he created a distinctive comedy style through which he poked fun at rednecks, rural folk who were perceived by urban folk as being uneducated. In 1993, he put out the comedy album “You Might Be a Redneck If…,” which reached its highest position on the Billboard 200 list at No. 38.

Three further comedic albums by him were released in the 1990s: “Games Rednecks Play” (1995), “Crank It Up: The Music Album” (1996), and “Totally Committed” (1998). These albums all enjoyed great success on the market.
He made an appearance in the 1995 sitcom “The Jeff Foxworthy Show,” which was based on his stand-up routines.

Just one season of the program was produced before it was canceled. The following season, NBC broadcast the program, but it was once again canceled.
For three years in a row, from 1998 to 2000, he was asked to present the Country Weekly’s ‘TNN Music City News Country Awards ceremonies.

From April 1999 through December 2009, he presented a weekly syndicated radio program called “The Foxworthy Countdown.” The program included conversations with celebrities and the “top 25 country hits.” The immensely popular program lasted for ten years.

Bill Engvall, Ron White, Larry the Cable Guy, and himself established the comedy group “The Blue Collar Comedy Tour,” which toured and performed across the nation from Nebraska in 2000 to Washington, D.C., in 2006. The trio gained enormous popularity and specialized in humor for everyday people.
In 2004, he issued his humorous CD, “Have Your Loved Ones Spayed or Neutered.” It had a strong sales performance and debuted at No. 1 on the Billboard comedy charts.

Foxworthy co-created the television series “Blue Collar TV” for the WB network, capitalizing on the popularity of their comedy tour. Alongside Blue Collar cast colleagues Bill Engvall and Larry the Cable Guy, he appeared on the program. Between 2004 and 2006, the program aired for two seasons.

From September 2009 to March 2011, he served as the host of the syndicated edition of the game show “Are You Smarter Than a Fifth Grader?”

The American Bible Challenge, a game show with a biblical theme, was hosted by Foxworthy and co-produced by him for two seasons. In 2013, Jeff served as the host of the food reality program “The American Baking Competition.”

He is best known for being a part of the “Blue Collar Comedy Tour,” which played to sold-out crowds across the United States and whose popularity led to three DVD movies and a hugely popular television series.

He was named the “Funniest Male Stand-Up Comic” in 1990 by the American Comedy Award.
For his work on “The Jeff Foxworthy Show,” he received the “People’s Choice Award” for “Favorite Male Performer in a New TV Series” in 1996.

American stand-up comedian and television celebrity Jeff Foxworthy has a $100 million dollar fortune. In addition to being a part of the Blue Collar Comedy Tour, which also includes Bill Engvall, Larry the Cable Guy, and Ron White, Foxworthy is also known for his “you might be a redneck” gags.

In high school, he played football against opponents.
He enjoys the outdoors and hunting, and he has appeared on a number of Outdoor Channel shows.