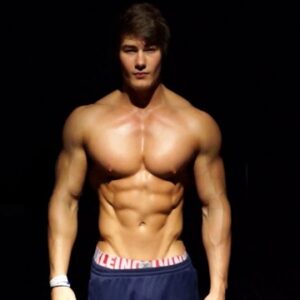 Jeff Seid is a well-known American bodybuilder, fitness model, and social media celebrity who has tens of thousands of admirers who admire him not just for his physical appearance but also for his charismatic personality. He is concerned about his health and believes in leading an active lifestyle. His stunning appearance and enviable physique have gained him notoriety as a well-known bodybuilder who preaches the ideal fitness motto. His interest in progressively establishing a strong physique and keeping a fuss-free, lively lifestyle began when he was five years old, thanks to his love of sports. Physical strength, according to Jeff, is similar to power and ensures the survival of the fittest in this very competitive environment. His desire to be in good physical shape was so strong that he began lifting big weights at the age of eleven! His childhood hero, Arnold Schwarzenegger, acted as his idol, and Jeff drew inspiration from him. It took him around five years to get the body he wanted as a youngster, and the transition he went through from the ages of 13 to 17 is truly remarkable. While it may appear to be an insurmountable task, Jeff has proudly demonstrated to the world that, despite countless setbacks, determination and hard work can lead to incredible achievement.

The Career of Jeff

In his incredible path to becoming a world-famous bodybuilder, Jeff Seid had to overcome a number of setbacks. His growing interest in sports and athletic attitude assured that he excelled in the game of football from his younger days.

He had already garnered recognition as an athlete by his senior year of high school, and he stood a good possibility of receiving football scholarships to prestigious colleges for his college study.

However, he had a major ACL injury while playing football in his senior year, which ended his dream of becoming a professional athlete. He was unable to pay for his college studies after losing the highly wanted scholarships.

After a few months, bad luck struck again, as he tore his ACL for the second time, effectively ending his football career.

Despite his obstacles, he did not let them stop him from achieving his ultimate objective of reaching the pinnacles of achievement in the fitness field.

While browsing the bodybuilding.com website in preparation for his forthcoming ACL surgery, Jeff came upon the new IFBB category of ‘Men’s Physique.’

Since he had faithfully trained himself for over six years, he realized that his passion for an aesthetic, health-oriented lifestyle could become a career reality in the bodybuilding arena.

He decided to participate after only a month and won the title in his very first exhibition as a bodybuilder. Since then, there has been no looking back as Jeff has gone on to achieve amazing success, winning prize after the title.

His unwavering commitment and hard effort paid off, as he soon rose through the ranks of the IFBB. He eventually earned a spot in the inaugural Mr. Olympia Men’s Physique Showdown.

This competition was a turning point in his career, as it gave him the opportunity to travel the world and inspire other aspiring bodybuilders. His newfound luck never let him down, and he was given a second chance to compete in the Mr. Olympia competition.

Jeff Seid now has his own clothing line, SeidWear, in addition to his bodybuilding profession, which has proven a major hit among his admirers. He now provides a number of popular YouTube videos, online courses, ISSA-certified personal training, and fitness competitions.

He’s even written a 150-page book called ‘Guide to Aesthetics,’ which chronicles his rise to fame and how he’s managed to maintain a strict and healthy lifestyle. This book has been well-received all across the world since it has motivated many young people to pursue an aesthetic path.

Jeff Seid was born in Renton, Washington, in the United States on June 12, 1994. Melissa and Kristina are his two sisters. He lived by the proverb “never back down,” and he never let his defeats have a grasp on him. He struggled against all difficulties to change his fate and achieve what he had always desired.

He also believes in doing things his own way so that he doesn’t have any regrets. He is an expressive, quick-witted, sociable, and fun-loving Gemini by nature.

Currently, he is based in Seattle. He chooses not to share his personal life with his followers, therefore his dating status is unclear.

Jeff Seid is an IFBB professional bodybuilder from the United States, and he is the list’s youngest bodybuilder.

Jeff began working out at a young age, and his teen transformation video has received millions of views on YouTube. He has a net worth of $1.5 million dollars.