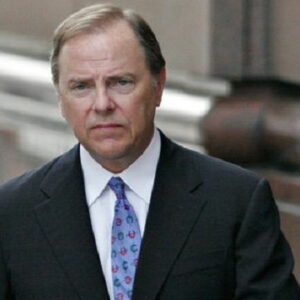 Former American businessman Jeffrey Skilling served as the CEO of the energy and services firm Enron Corporation. He was accused of insider trading, conspiracy, misleading audit presentations, and other offenses in 2006 and was later found guilty of a federal felony. His actions ultimately caused the Enron Corporation to fail. In 1990, Jeffrey began working for Enron Corporation after being hired by Kenneth Lay, who would also eventually be found guilty. In a short period of time, Jeffrey succeeded Lay as Enron’s chief operating officer and took over control of the company’s confidential secrets. His competitiveness and upbeat demeanor contributed to his company’s status as “America’s Most Innovative Company.” The corporation, however, abruptly collapsed in 2001, and the California electrical crisis only made matters worse. Jeffrey made the decision to step down and sold his $60 million investment in addition. Later that year, as the business neared bankruptcy, Skilling and Kenneth Lay were charged with conspiracy. Skilling received a sentence of 24 years, 4 months in jail in 2006 after being found guilty of 35 offenses. He was also required to pay a $45 million fine. The Justice Department commuted Skilling’s prison sentence by ten years in 2013.

On November 25, 1953, Jeffrey Keith Skilling was born in Pittsburgh, Pennsylvania. Betty and Thomas Ethelbert Skilling Jr. gave birth to him. Along with his three siblings, he was raised.
He was raised in Illinois and New Jersey. While his older brother went on to become the head meteorologist at WGN-TV, his father worked as a sales manager.

In Illinois, Jeffrey went to West Aurora High School. He began working at WLXT, a television station when he was still a high school student. He didn’t start working till he was 16 years old.
He was given a full scholarship to Southern Methodist University in Texas since he was a great learner. At the university, Applied Science was his area of study.

He worked for a Houston bank directly after receiving his degree before being moved there by Harvard Business School.
He earned his MBA from Harvard in 1979. He graduated as a Baker Scholar and was one of the class’s top students.

At McKinsey & Company, Jeffrey began his career as a consultant in the energy and chemical practices division. He eventually rose to become one of McKinsey’s youngest partners.
He then began working for Enron and quickly moved up the corporate ladder of success.

Working for the Enron Corporation

Skilling had the chance to work on a project for Enron when he was employed with McKinsey & Company. Kenneth Lay, the company’s then-CEO and Chairman, was struck by his abilities and his comprehension of how energy functions.

Lay proposed that Skilling take the chairmanship and chief executive officer role at Enron Finance Corp.
Skilling eventually rose to the position of chairman of Enron Gas Services Company in 1991. A few months later, he was appointed as the chairman and CEO of Enron Capital & Trade Resources, one of Enron’s subsidiaries.

Skilling finally rose to the position of President and CEO of the entire company after spending seven years at Enron. He was now the second-most powerful person in the corporation as a result.

Enron quickly became the leading gas and power reseller in the USA thanks to skill. Mark-to-market accounting and his investing approach both made significant contributions to the company’s expansion.
As a result, Skilling took Lay’s place as Enron’s most powerful man in February 2001. He earned $132 million as the CEO of his company in a single year.

Skilling submitted his resignation on August 14, 2001. Later, Lay received a second call to accept the position of CEO.

Failure of the Company

Skilling’s resignation caused Enron’s performance to decline significantly. In August, the company’s stocks hit an all-time low and by October they were as low as $15.
In November 2001, the company began to decline after Lay was allegedly caught selling over $60 million of his stock at the same time.

From being the most celebrated and profitable firm in the USA, Enron moved on to face bankruptcy. Accusations including the fraudulent display of audits, insider trading, and laundering damaged the company’s reputation forever.

In December 2001, the company declared bankruptcy. It was the biggest bankruptcy in the history of the United States. 20,000 individuals lost their jobs and investors faced massive losses of millions of dollars.

In 2006, Jeffrey and Kenneth were both convicted of conspiracy, fraud, and insider trading. Many others who were indirectly involved in the crime escaped incarceration by coughing up large fees.
Jeffrey Skilling was charged with 35 counts which encompassed numerous fraudulent acts. He surrendered to the FBI on February 19, 2006.

It was suggested that Jeffrey had an idea about the impending insolvency of the corporation. It was also stated that he had sold $60 million of his investment as he understood that the company wouldn’t endure long.

His trial began on January 30, 2006, in Houston despite Skilling’s request to conduct the trial somewhere else. He asserted that the trial if held at Houston, will not be fair. But his plea was denied by the court.

On May 25, 2006, he was proven guilty of conspiracy, insider trading, false statements to the auditor, and securities fraud. On October 23, 2006, he was sent to the penitentiary for 24 years and four months.

He was also compelled to cough up a fine of $45 million US dollars. His conviction was viewed as one of the toughest in the history of white-collar offenses.

His request to remain free until his appeals to higher courts was refused as Judge Patrick Higginbotham ordered his immediate detention. He started serving in the penitentiary on December 13, 2006.
Kenneth Lay, on the other hand, died of a heart attack, before starting his sentence in 2006. On October 30, 2008, Jeffrey was relocated to a low-security jail near Littleton.

In 2009, it was claimed before the Supreme Court that Jeffrey’s intention was not to generate profit for himself from the corporation. It was also asserted that the evidence used against him was not true.
In 2011, the court came up with an unchanged verdict even after considering the following cited grounds. Skilling subsequently opted to appeal to the Supreme Court and appealed the newest verdict, but was granted certiorari.

However, in 2013, it was reported by federal prosecutors that Skilling’s sentence has been reduced by 10 years. The announcement was allowed by U.S District Court Judge, Sim Lake, in 2013.
It was said that he would be released in 2017. However, he wasn’t released in 2017 and his release date was moved to February 21, 2019.

Jeffrey’s first marriage ended in divorce in 1997. Jeffrey and his first wife have a daughter and two kids.
His youngest son died of a heroin overdose on February 3, 2011, at age 20. Skilling was in the penitentiary at the time of his son’s death.

Skilling got married to Rebecca Carter in March, 2002.

The most well-known crime committed by American Jeff Skilling was his role as the former CEO of the Enron Corporation. Jeff Skilling’s net worth is $500k as of this writing. From February 12, 2001, to August 14, 2001, Jeff served as CEO of Enron, which he joined in 1990. December 2001 saw the bankruptcy filing of Enron. It was the largest corporate bankruptcy in US history at the time.