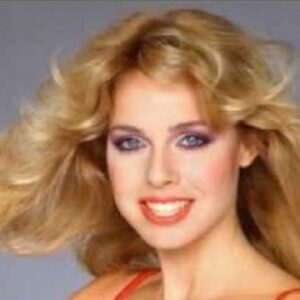 Jenilee Harrison is an American actress best known for her role as Cindy Snow in the hit television show “Three’s Company.” Jenilee had dreamed to be a successful actress since she was a child. She began modeling at an early age and competed in pageants such as Miss San Fernando Valley, Miss Los Angeles, Miss Hollywood, and Miss Young America, winning each one. She was the total deal, with killer looks and a to-die-for figure. After making a name for herself on the runway, she went on to become the face of a slew of businesses and advertising. Harrison enrolled in an acting school and honed her acting talents in the time between her fashion and advertisement modeling. When she landed the role of Cindy Snow on ABC’s iconic comedy ‘Three’s Company,’ her greatest goal was accomplished. Following that, he had a string of guest roles and cameo appearances in popular television shows. She also had a starring part in the television show “Dallas” and appeared in a film and a miniseries. She currently works as a spokesperson for a number of infomercials.

Jenilee Harrison was born in a middle-class family in Northridge, California on June 12, 1958. Her mother was a math teacher and her father was an aeronautical engineer. She had two older sisters and two younger brothers, for a total of four siblings.

She spent most of her childhood in the San Fernando Valley. When she was 15, her parents divorced. Despite the fact that they lived apart, Harrison was close to both of them.

Jenilee Harrison was born with a beautiful body and a healthy glow to her skin. She had a bright blond complexion and a tall, thin frame that gave her the appearance of a stylish young lady. Miss San Fernando Valley, Miss Los Angeles, Miss Hollywood, and Miss Young America were among the beauty pageants she entered and won.

Despite her modeling career, she continued to pursue her education. Instead, she finished her studies while also pursuing a modeling career. She worked on a few television commercials and modeling assignments, and the money she earned was utilized to pay for her tuition at the University of Southern California (USC).

The Career of Jenilee

Jenilee Harrison’s NFL career began in 1978 when she was selected as a member of the Embraceable Ewes cheerleading team for the Los Angeles Rams. She viewed the initiative as a means of gaining access to Hollywood.

She can be seen in the first few moments of the Super Bowl XIV highlight clip, which shows the Rams cheerleaders in their locker room before the game. She was also featured in a CHiPs episode from the second season when Jon and Ponch pull over a van full of Rams cheerleaders.

She earned a bachelor’s degree in education from USC in 1980. She was named Sweetheart of Sigma Chi in the same year. Jenilee initially met acting coach Joyce Selznick while she was a student at USC. Selznick provided her with a wealth of advice on how to improve her acting abilities.

Jenilee’s big break came in 1980 when she was cast in ABC’s successful television sitcom “Three’s Company.” She was supposed to replace Suzanne Somers, the sassy stupid blonde who played Chrissy Snow, on the show.

Jenilee portrayed Cindy Snow, Chrissy Snow’s cousin, in the film. Cindy was very similar to her cousin Chrissy, with the exception that she wasn’t a bumbling blonde.

Jenilee made her ‘Three’s Company’ debut in the seventh episode of season five. ‘Chrissy’s Cousin’ is the title of the episode. She debuted as Jack and Janet’s new roommate on the show. Cindy showed she was a klutz right away when she knocked Jack down.

Jenilee provided a lot of laughter and humor to the program, and her clumsiness and wit added to the gags. Despite the fact that Jenilee replaced Somers, she was not given opening credit billing. Instead, she was credited as a guest star in the closing credits.

For the sixth season of ‘Three’s Company,’ Jenilee repeated her role. She was given the opening credits this time. People appreciated her in-and-out appearance and the fun and laughter she brought with her presence, even though it wasn’t a heavy part any longer.

Though she had a modest role in the first few episodes, her character began to take shape around the midseason, and she received more screen time. However, as the show progressed, her screen time decreased once more.

Jenilee’s character was declared outmoded by the end of season 6 of ‘Three’s Company.’ It was not renewed for the next season, and her character Cindy Snow was written off the show. ‘Janet Wings Out’ was her only appearance in Season 6’s 24th episode.

Jenilee’s next role was as Jamie Ewing Barnes on the critically acclaimed smash drama series ‘Dallas.’ With the episode ‘Jamie,’ she made her series debut in 1984. Jenilee was a recurring character who stayed in the show until 1986 when she decided to end it.

Her character was killed in a mountain climbing mishap in the end.
She made her cinematic debut in addition to her television outings. She starred alongside James Garner and C.

Thomas Howell in the 1984 film ‘Tank,’ in which she played a reluctant prostitute. Meanwhile, in 1983, she collaborated alongside Oscar winners James Coburn and Eva Marie Saint on the television miniseries Malibu.’

Jenilee participated in the TV game program ‘Super Password’ with Dick Gautier in 1985 while working on ‘Dallas.’ She returned to the show a second time in 1986 with Marty Cohen, Michael Young, and Bruce Baum, and a third time in 1987 with Bert Convy.

Jenilee returned to television in 1999 after a long sabbatical, this time as a guest star on FOX-‘That TV’s 70’s Show.’
Harrison has been appearing in infomercials since 2005, where she is a spokesperson for a variety of items, including the Ultimate Chopper with Chef Tony.

Jenilee Harrison’s career must undoubtedly be defined by her role as Cindy Snow in the immensely popular and well-loved television series ‘Three’s Company.’ She came on as a substitute for Suzanne Somers, who played Chrissy Snow when the sitcom was in its sixth season.

Chrissy’s cousin was a clumsy farm girl, and her character was a relative of Chrissy’s. Due to the fact that it was a mid-season episode, Cindy’s demeanor and temperament were similar to Chrissy’s. Jenilee also returned for the sixth season of the show before departing.

Jenilee became stepmother to Oppenheim’s two children from his former marriage to actress Cybill Sheperd, Ariel, and Zachariah, after the marriage. She doesn’t have any children of her own.

She was a Los Angeles Rams cheerleader before going into acting. From 1980 to 1982, Harrison played Cindy Snow on the television show Three’s Company.