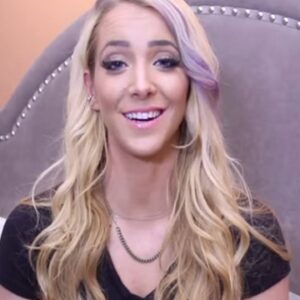 If you enjoy watching amusing videos on YouTube, Jenna Marbles is a name you should be familiar with. She is the happy owner of YouTube’s eighth most subscribed channel, with over 16 million subscribers (as of May 2016). Plus, she’s the only female-run channel on the air. When she graduated from Boston University with a Master of Education in Sport Psychology and Counseling, becoming a worldwide famous YouTuber was not the first thing on her mind. She actually wanted to be a veterinarian, a zookeeper, or a soccer player as a child, despite the fact that she was terrible at soccer. This outgoing and outspoken young lady was well-liked in college, despite her lack of clarity about her professional goals. She discovered her actual passion—making videos—after working half-heartedly in a series of odd jobs. Things progressed, and she was soon a well-known and well-liked comic with her own YouTube channel, blog, and vlog, as well as millions of followers. Today, this humorous girl is so well-known that she has celebrity followers on Twitter, including Justin Bieber, Iggy Azalea, Azealia Banks, and Lady Gaga.

Jenna Marbles has a cult following, and her vivid hair, inventive make-up, and trendy clothes are proof of that. But did you know that before she became an internet sensation, Jenna was just like any other American girl, lost and insecure about her future? She aspired to be a veterinarian or a zookeeper since she was a child. That, however, did not occur. A bachelor’s degree in psychology from Suffolk University and a master’s degree in sport psychology and counseling from Boston University were the results. She graduated from college, though, still befuddled, and found herself working as a bartender, blogger, and go-go dancer, among other things.

Her future career was set in motion by a job at barstoolsports.com. She improved her skills in comedy, blogging, and video production here. She got her own YouTube channel and uploaded the video ‘How To Trick People Into Thinking You’re Good-Looking’ in 2010 after making amusing films for a few years. Jenna quickly became a YouTube sensation after posting the video, which was an instant hit.

Do we really have to tell you how special Jenna is? Sure, she’s attractive, quirky, and entertaining, but it’s her honesty and vulnerability that endears her to us. As her followers are well aware, she is the product of a broken home, just like millions of other Americans, and has experienced much of what every youngster does. Despite her celebrity, she is someone we can relate to, someone whose life is filled with the same problems we do. She is open and honest, and she entrusts us with the most personal aspects of her life, which is precisely why we adore her!

Jenna is a businesswoman that manages the Kermie Worm & Mr. Marbles brand of dog toys in addition to being a prominent YouTuber. She based the appearances of the toys on her real dogs, Mr. Marbles, Kermit, and Peach. She was a true blue animal lover and the “mom” of three dogs, Mr. Marbles, Kermit, and Peach. Her pets also appear in a number of her popular videos. The well-liked celebrity also makes cameos on TV shows on occasion. Jenna Marbles, who had been a vegetarian on and off for a long time, declared in a video in 2015 that she was turning completely vegan.

Jenna grew up in the Rochester, New York area. Her parents split when she was a child, and she has remained close to her mother Deborah, who is now the chief executive officer of her daughter’s company. She earned a Bachelor of Science in Psychology from Suffolk University after graduating from Brighton High School in 2004. She subsequently went on to Boston University to pursue a master’s degree in education with a focus on sport psychology and counseling. She met Willy in high school, and the two dated for four years before splitting up. She then dated Max Weisz for four years before calling it quits in 2012. Julien Solomita, who is frequently featured in her videos, began dating her in 2013. In November of 2014, Jenna and Julien launched the Jenna and Julien Podcast.

Jenna Marbles has a net worth of $8 million.