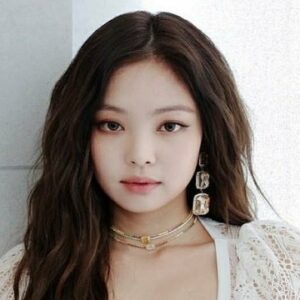 Jennie Kim is a South Korean pop singer who is a member of the ‘Black Pink’ female K-pop ensemble. Kim was signed as a trainee by ‘YG Entertainment’ after completing her education in New Zealand and moving to Seoul, South Korea. She became famous after participating in the music video ‘That XX’ by singer G-Dragon. She was also featured on his hit ‘Black’ after that. ‘YG Entertainment’ has been hyping the release of ‘Black Pink’ for a long time, and Jennie finally joined the band on August 8, 2016, alongside Lisa, Jisoo, and Rosé. Lee Hi’s single ‘Special,’ Seungri’s ‘GG Be,’ and G Dragon’s ‘Eventually’ are among Jennie’s other collaborations. She, like the other members of the band, has a large fan base and is often referred to as the ‘Black Pink’s’ leader. Jennie Kim’s record label, ‘YG Entertainment,’ regards her as its trump card, and she is dubbed ‘the YG Princess.’ She is a top-rated K-pop singer who can communicate in Japanese, Spanish, English, and Korean.

Jennie Kim was signed by ‘YG Entertainment’ in South Korea when she was 14 years old. She did not, however, begin her singing career immediately after accepting the contract, instead undergoing six years of training. She not only worked on her vocals but also on her rapping abilities. For several years, ‘YG Entertainment’ had been cultivating the band ‘Black Pink,’ and in 2012, they began publicizing their debut. On June 29, 2016, the band’s final members were revealed. On August 8, 2016, Jennie, Jisoo, Rosé, and Lisa made their official debut. ‘Boombayah’ and ‘Whistle’ were among the songs on their debut album, ‘Square One.’ The song ‘Whistle’ went to number one on the ‘Goan Digital Chart,’ and the video became viral on YouTube. The band became the highest rated female K-pop band on the ‘Billboard Social 50’ as a result of this, and they became an instant sensation.
After the release of their new single, “As If It’s Your Last,” on June 22, 2017, Jennie Kim and her bandmates reached a new milestone in their careers. The song’s sound was unlike anything they’d done before, and it debuted at the top of the ‘Billboard’s World Digital Song’ list. They were unstoppable as long as they were in the spotlight. With their extended musical play ‘Blackpink,’ they decided to make their debut in Japan on August 30, 2017. On the ‘Oricon Albums Chart,’ the EP debuted at number one. Jennie was announced as the new face of ‘Chanel Beauty’ in January 2018. With ‘Harper’s Bazaar Korea’ as their new muse, she shot her debut photoshoot for the company. She was the first Korean solo artist to perform at Coachella in April 2019.

Despite her best efforts to avoid controversy, Jennie Kim got involved in a contentious event when she appeared on an episode of the comedy show ‘Knowing Bros.’ Kim Youngcheol was asked in a made-up conversation which city she had lived in in New Zealand. ‘Do you know any cities in New Zealand?’ she responded. Many people were offended by her response, and she chose not to respond to the reaction.

Jennie Kim was born in the Seoul Capital Area, South Korea, on January 16, 1996. She went to ‘ACG Parnell College’ in New Zealand to further her education. She relocated to South Korea after graduation and was signed by ‘YG Entertainment.’ Her father is a hospital owner, while her mother works for the media company ‘CJ E&M.’ According to rumours, Jennie Kim and Big Bang rapper G Dragon are dating.