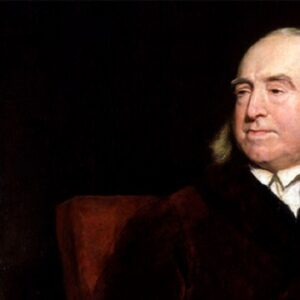 Jeremy Bentham was an English philosopher, jurist, and social reformer who is best known for his utilitarianism theory. He was expected to follow in his father’s footsteps and seek a profession in law when he was born in the middle of the eighteenth century in London. He disliked the British judicial system and only studied law to satisfy his father. Then, in the same year that he started working at the bar, he came across the writings of a number of radical philosophers, who assisted him in determining his future path of action. He immediately left the legal profession to pursue a career in legal theory. He developed his initial version of utility theory while still in his early twenties, though he invented the phrase and fully defined it in his 1789 work, ‘An Introduction to the Principles of Morals and Legislation.’ He quickly rose to prominence and recruited a group of similarly radical young guys around him. Bentham also advocated for law codification, prison improvements, a broader universal franchise, universal education, and other reforms. Despite the fact that most of his recommendations were ignored during his lifetime, they served as the foundation for subsequent reforms.

Jeremy Bentham was born in Houndsditch, London, on February 15, 1748, into a rich family that backed the Tory party. Jeremiah Bentham, his father, was a renowned lawyer in the Court of Chancery. Jeremiah was the second husband of his mother, Alicia Whitehorn née Grove, who was a devout woman.

Jeremy was the eldest of seven children born to his parents. All of his siblings perished in infancy, with the exception of Samuel, his youngest. On January 6, 1759, his mother died as well. Following that, their father was mostly responsible for raising the two brothers. They also spend a great deal of time with their grandmother.

Jeremy was a prodigy as a child. He is claimed to have started studying Latin at the age of three and would sit at his father’s desk reading English history when he was still a toddler. He was later accepted to Westminster, although he did not enjoy his time there.

His father forced him to enroll in Queen’s College, Oxford, when he was only twelve years old. He, on the other hand, did not find the collegiate environment to be particularly exciting.
Oxford, he thought, was a hotbed of bigotry and sloth. His experiences during this time instilled in him a skepticism of Anglican churches and a dislike for vows. As a result, when he received his Bachelor of Arts degree in 1763, he found himself in a difficult situation.

He had to declare his allegiance to the Church of England in order to earn his degree, which went against his principles. After much deliberation, he finally consented to take the oath since losing his degree would disappoint his father, who had hoped for him to pursue a career in law.

Following that, he enrolled at Lincoln’s Inn to study law and was assigned to the King’s Bench division of the High Court as a student. During this time, he was particularly inspired by Chief Justice Lord Mansfield’s decisions, although also spotted flaws in Sir William Blackstone’s lectures.

Jeremy Bentham was first perplexed about his life’s purpose. Despite continuing to study law at his father’s request, he quickly became disillusioned with it.

Benthen wrote his first book, ‘A Fragment of Government,’ in 1766, while still a law student. The work is thought to mark the beginning of his intellectual radicalism, as it is written in a clear and straightforward language.
In 1769, he came across books by Montesquieu, Helvétius, Beccaria, Voltaire, David Hume, David Hartley, and Joseph Priestley, among others. They not only assisted him in determining a course for his life, but also in developing an early version of his utility concept.

Bentham was also called to the bar in 1769. But, much to his father’s dismay, he elected not to practice law, despite his father’s hopes that his eldest son would one day become Lord Chancellor. He began to focus on analytic jurisprudence instead.

He now reads and writes for long periods of time. His first significant work, ‘An Introduction to the Principles of Morals and Legislation,’ was completed by 1780. The work, however, was not published until 1789.
Meanwhile, in 1781, Bentham met the Earl of Shelburne and became acquainted with a number of notable Whig politicians and lawyers through him. It was also in this year that he created the term ‘utility.’

Étienne Dumont, a Genevan exile, was one of the people he met during this time. Later, he translated Bentham’s works and was instrumental in establishing his reputation and thought in Europe and America.

Jeremy Bentham visited his brother, Samuel, at Krichev, Belarus (then known as White Russia) sometime in the mid-1780s. He learned about the ‘Panopticon,’ a circular structure that allowed a single watchman to see all (pan) inmates of a facility.

He then expanded on the concept and advocated that prisons be constructed on this paradigm. His proposition, however, was never taken seriously; however, the episode inspired him to develop his ‘Sinister Interest’ theory, which he promoted in the summer of 1804.

At the same time, he began to consider the legal restrictions on monetary bargaining that were in place at the time. In 1787, he authored a series of thirteen letters on the subject, addressed to Adam Smith, an economist who opposed free interest rates.

‘Defense of Usury,’ a collection of these letters, was later published as a book. He made solid arguments against any such limits in this work. He claimed that each person is the greatest judge of his own advantage and that he should be able to choose the terms on which he lends his money.

Return to the United Kingdom

Jeremy Bentham returned to England and attempted to build out a career in politics, but was unsuccessful. Then, beginning in 1788, he began work on legislative concepts. He released his famous book, ‘An Introduction to the Principles of Morals and Legislation,’ the following year.

He quickly gained international acclaim as a writer, and in 1792, he was granted honorary French citizenship. He accepted it, but he disagreed with many of France’s policies. ‘Emancipate your colonies!’ he wrote in 1793. It was delivered to the French National Convention, where he attempted to demonstrate “the futility and mischievousness of distance dependence on a European state.”

Jeremy Bentham likewise harshly attacked the Jacobins and their oppressive tactics. ‘Anarchical Fallacies; Being an Examination of the Declaration of the Rights Issued During the French Revolution,’ he wrote in 1796.
In 1796, his father died as well, giving him a sizable estate. He began work on his favorite project, the ‘Panopticon,’ a circular prison with few guards that he spent a considerable portion of his wealth on.

For sixteen years, he worked on this project. Despite the government’s refusal to embrace the notion, he was compensated for his services in 1813 with a sum of £23,000. He is now regarded as one of the forefathers of jail reforms as a result of his efforts.

Another of his main occupations was the codification of law. He sought to codify British laws and spent a lot of time doing so. Despite the fact that his efforts were generally fruitless, they established the groundwork for future research on this topic.

Jeremy Bentham studied on religion intensively from 1809 until 1823, with the goal of abolishing such ideas. The ‘Parliamentary Reform Catechism,’ published in 1817, is a significant text on the subject.

He advocated for annual elections, equitable electoral districts, women’s suffrage, and secret ballots on the political front. He also advocated for women’s participation in governance, marriage reform, and the legalizing of homosexuality, among other things.

Bentham maintained that homosexuality was not unnatural in his essay ‘An Offense against One Self,’ and reprimanded society for intruding in a primarily private matter. However, it was not until after his death that the work was published.

He co-founded the ‘Westminster Review’ with James Mill, John Stuart Mill’s father, in 1823. He was accompanied by a group of young men he dubbed “philosophical radicals.” He had a ‘father-son’ relationship with John Browning and left a significant legacy for Edwin Chadwick among them.

Jeremy Bentham also felt that education should be accessible to all people, regardless of their socioeconomic status or religious affiliation. His thoughts inspired many of those who created London University (later University College London) in 1826. Bentham, who was in his seventies at the time, played only a minor role in its formation.
Up until a month before his death, he continued to write on a variety of issues. He left manuscripts totaling an estimated 30 million words, which were later edited and released by his followers, in addition to his published works.

Jeremy Bentham is best known as a proponent of utilitarianism, and his most famous work on the subject is ‘An Introduction to the Principles of Morals and Legislation.’
He attempted to describe the principle of ‘utility’ in this book, stating that perfect law should deliver the greatest happiness to the largest number of people. He also stated that punishments are only justified if they “promise to prevent some greater evil.”

Jeremy Bentham was a single man who never married. He died on June 6, 1832, at his home in Westminster, London’s Queen Square Place. He was eighty-four years old at the time. His body was publicly dissected by his friend, the hygienic reformer Dr. Thomas Southwood Smith, and then preserved as a ‘auto-icon,’ as per his wishes.
Dr. Southwood Smith held the ‘auto-icon’ until 1850. It was purchased by University College London in that year and placed on public display at the end of the South Cloisters in the main building, where it is still on show today.

Jeremy is one of the richest Philosopher & listed on most popular Philosopher. According to our analysis, Wikipedia, Forbes & Business Insider, Jeremy Bentham net worth is approximately $1.5 Million.

Although Bentham desired to have his original head shown, he was unable to do so since it had become disfigured during the mummification process. As a result, a wax head with his own hair has been installed in its place, and the old head has been safely stored.
Three times, the auto-icon was brought to a meeting of the College Council. It was marked as “present but not voting” there.