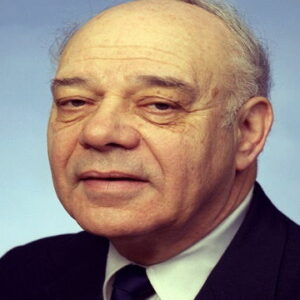 Jerome Karle was an American physical chemist and crystallographer who shared the Nobel Prize for Chemistry with Herbert A. Hauptman in 1985 for “exceptional breakthroughs in the development of direct methods for the determination of crystal structures.” He worked on the Manhattan Project for three years after getting his PhD in physical chemistry. After that, he went to work at the US Naval Research Laboratory (NRL), where he finally rose to the position of chief scientist for research into the structure of matter. Meanwhile, following WWII, he worked at the National Research Laboratory with Hauptman on crystal structure research. They devised mathematical equations to describe the many spots that appear on photographic films as a result of X-ray diffraction by a crystal. Based on an analysis of the intensity of the spots, their equations allowed them to pinpoint the exact location of atoms within the crystal’s molecules. Despite the fact that their approach was published in 1949, it remained unusable for a long period as potential applications were sought. Crystallographers started using the approach to figure out the three-dimensional structure of tiny biological molecules gradually. This breakthrough technology used powerful computers in the 1980s to reduce the time it took to discover the structure of a simple biological molecule from two years to two days. He retired from the NRL in 2009 after more than 60 years of service.

Karle was born on June 18, 1918, in New York City, New York, to a Jewish family. Sadie Helen (Kun) and Louis Karfunkle were his parents.

His mother, a gifted pianist and organist, wished for her son to pursue a career as a pianist. Karle not only learned to play the piano as a child, but he also competed in New York City’s ‘Music Week’ competitions.

Despite his success in music competitions, he quickly discovered that public concerts were not his cup of tea. Instead, he discovered his passion for science and decided to devote his life to it. Single-wall handball, ice skating, touch football, and ocean swimming were among his favorite sports.

He attended public schools in New York City and benefited greatly from its high educational, character-building, and discipline standards. He went to the Abraham Lincoln High School in Brooklyn during his final year, the same school where future Nobel Laureates Arthur Kornberg and Paul Berg attended. He took chemistry and physics classes in high school.

In 1933, at the age of 15, he enrolled in City College of New York. This was a challenging time for him because he had to contend with the college’s high academic standards as well as travel three hours daily on the subway to and from home. His piano practice suffered as a result of these difficulties.

He took additional Biology, Chemistry, Physics, and Mathematics classes in college, in addition to the standard program. In 1937, he graduated from City College and spent the next year studying Biology at Harvard University. In 1938, he earned his Master’s degree.

A Career of Jerome Karle

After a brief hiatus, he returned to Albany to work for the New York State Health Department in order to save money for additional studies. In the meantime, he resumed his piano lessons.

He made his first substantial but modest contribution to science at Albany. Fluoridation of drinking water was underway at the time. He devised a method for determining the amount of dissolved fluorine in water, which later became the gold standard for water fluoridation.

He studied in the University of Michigan’s Chemistry Department in 1940 and obtained his Ph.D. in 1944. However, because his academic work was completed by summer 1943, he and his wife, Dr. Isabella Karle, joined the Manhattan Project at the University of Chicago.

The Karles returned to the University of Michigan in 1944, where he worked on a project for the US Naval Research Laboratory and Isabella worked as a Chemistry Department instructor.

He studied the structure of monolayers of long-chain hydrocarbon films involved in the boundary lubrication of metallic surfaces while at Michigan. He also came up with a theory to explain the electron diffraction patterns observed in oriented monolayers.

The couple moved to Washington, D.C. permanently in 1946 to work for the Naval Research Laboratory. They kept concentrating on the quantitative features of gas electron diffraction analysis.

Isabella assisted in the establishment of an experimental X-ray diffraction apparatus in their laboratory in the later half of the 1950s.
Throughout the 1960s, he experimented there to create a method for determining crystal structure that could be applied to both non-centrosymmetric and centrosymmetric crystals.

The required approach was devised with Isabella’s help and termed the symbolic addition procedure. In 1963, the first use of this method was published, and the following year, the first substantially equal atom noncentrosymmetric crystal structure solved by direct phase determination was published.

With each passing day, new applications for the direct approach for structure determination were discovered, and by the end of the decade, several laboratories were demonstrating interest in the method’s potential. During this time, he also assisted his wife with some of her studies.

During that time, some theoretical investigations were also carried out. During the 1950s and 1960s, he studied gas electron diffraction and conducted experiments on internal rotation and coherent diffraction in relation to excitation processes.

In the 1970s, he continued his crystal structure analysis research, which included the development of a tangent for phase determination. He also conducted some macromolecular structural refinement with the use of the tangent formula.

He produced a precise, linear algebraic theory by the end of the decade that could accommodate any number and type of anomalous scatterer, as well as any number of wavelengths.

He worked on the development of novel analytical methods and their applications during his lengthy and renowned research career. He did, however, teach topics like Mathematics and Physics at University College of the University of Maryland from time to time.
Karle and Herbert A. Hauptman shared the Nobel Prize in Chemistry in 1985 for developing X-ray scattering techniques to directly analyze crystal structures.

On July 31, 2009, he and his wife, Dr. Isabella, left the US Naval Research Laboratory. He had been a member of the organization since 1944. The Karles served in the US government for 127 years as a pair. He was the Chief Scientist of the Laboratory for the Structure of Matter until he retired.

Karle and Hauptman devised mathematical formulae to explain the formation of many spots on photographic films as a result of X-ray diffraction by a crystal.

Their equations allowed them to pinpoint the exact location of atoms within the crystal’s molecules based on an examination of the intensity of the spots. In 1949, they published their method.

Crystallographers took a long time to comprehend the method’s potential. It was first used to figure out the three-dimensional structure of tiny biological compounds as hormones, vitamins, and medicines. The process was also crucial in the development of novel pharmaceuticals and other synthetic materials.

It took two years to establish the structure of a simple biological molecule before Karle and Hauptman published their approach; however, in the 1980s, with the aid of powerful computers that aided do the intricate calculations mandated by their method, the work took only two days.

Karle and Hauptman shared the Nobel Prize in Chemistry in 1985 for their work in determining the structure of crystals using X-ray scattering techniques.

The Karle pair received the Department of the Navy Distinguished Civilian Service Award, the Navy’s highest form of gratitude for civilian employees, after they retired.

Karle met Isabella Lugoski, a fellow student at the University of Michigan who went on to become a famous scientist. In 1942, they married and had three daughters together.

Jerome is one of the wealthiest chemists and one of the most well-known. Jerome Karle’s net worth is estimated to be $1.5 million, according to Wikipedia, Forbes, and Business Insider.