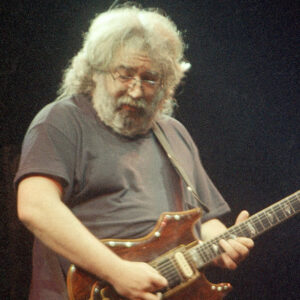 Jerry Garcia was an American guitarist and musician best known for being a founding member of the rock band The Grateful Dead. The mid-1960s rock band was recognized for its unusual and varied style, which incorporated elements of rock, folk, bluegrass, blues, reggae, country, and psychedelia. During the counterculture era, he gained notoriety as the group’s primary guitarist and vocalist and was also regarded by some as the band’s spokesman. The Grateful Dead took over the hearts of music fans not just in America, but all across the world for nearly three decades. Jerry Garcia established a name for himself as a co-founder of the world-famous musical group, but he also got involved in other ventures, the most significant of which was the Jerry Garcia Band. He had a close friendship with bluegrass mandolinist David Grisman, with whom he frequently cooperated to play. Garcia, despite his brilliance and talent, had a dark side: he was a compulsive smoker and drug addict. As a diabetic, his health deteriorated in the 1990s as a result of his addictions. He died of a heart attack in 1995, while he was only 53 years old.

Jose Ramon “Joe” Garcia and Ruth Marie “Bobbie” Garcia gave him the name Jerome John Garcia on August 1, 1942, in San Francisco, California. His parents were huge music aficionados, so he was called after composer Jerome Kern. He had one older sibling.

He has always liked music and has been encouraged to pursue it by his music-loving parents.
In 1947, tragedy hit the Garcia family when his father drowned while fishing.

His mother started working to support the family and Jerry and his brother were moved to live with their grandparents. His mother remarried in the end.

His artistic ability became obvious while he was a student at Monroe Elementary School. Ray Charles, John Lee Hooker, B. B. King, Hank Ballard, and Chuck Berry were among the rock and roll and rhythm and blues artists who influenced him as he grew up.

He went to numerous schools as a student, including Menlo Oaks School, Balboa High School, and Analy High School. As a teenager, he was a troublemaker who was known for skipping lessons and fighting with his classmates.

He was in a catastrophic car accident in 1961, in which one of his pals died. For young Jerry, this was a wake-up call, and he resolved to reconstruct his life.

The Career of Jerry

Jerry Garcia made the decision to take his life seriously and began playing the guitar professionally. Over the next few years, he played in various bands and began teaching acoustic guitar and banjo. During this time, he met several other up-and-coming artists and decided to start his own band.

The band drew on a wide range of musical inspirations and used a lot of improvisation, and it’s widely regarded as one of the pioneers of jam band music.

The Grateful Dead’s first two albums, ‘The Grateful Dead’ (1967) and ‘Anthem of the Sun’ (1968), were middling successes, but their third album, ‘Aoxomoxoa’ (1969), cemented their reputation as a popular rock band. The band used to go on a lot of tours and do live shows.

Due to its eclectic and unusual sound, the band grew in popularity during the 1970s. Jerry Garcia began pursuing side projects in addition to his work with The Grateful Dead, and his solo albums ‘Garcia’ (1972), ‘Compliments’ (1974), and ‘Reflections’ (1976) were published (1976).

In the mid-1970s, he formed another band, The Jerry Garcia Band. It featured bassist John Kahn and keyboardist Melvin Seals and was one of his most prominent side projects. This band, too, played rock songs with blues, folk, country, and jazz influences.

Garcia had a very rough time in the 1980s. His health had deteriorated significantly as a result of his drug use. This had a bad impact on his musical career, and he was not very productive during this decade.

Jerry Garcia is best known for being a founding member of the rock band The Grateful Dead. The band was well-known for their improvisational approach and live performances, and was ranked 57th in ‘Rolling Stone’ magazine’s edition The Greatest Artists of All Time.’

The Grateful Dead’s albums have sold over 35 million copies around the world.

As a member of the Grateful Dead, Jerry Garcia was inducted into the Rock and Roll Hall of Fame in 1994.
In Rolling Stone’s “100 Greatest Guitarists of All Time” cover article, he was ranked 13th.

Jerry Garcia had one daughter with Sara Ruppenthal Garcia, whom he married in 1963. While still married to Sara, he had an affair with Carolyn Adams, which led to their divorce in 1967.

In the 1970s, Carolyn gave birth to two daughters. In 1981, Garcia married Carolyn. While he was still dating Carolyn, he began a connection with Deborah Koons.

In 1994, Garcia and Carolyn Adams divorced, and he married Deborah Koons.
Jerry Garcia battled drug addiction as well as excessive smoking. He was also diabetic, and his substance abuse exacerbated his health issues. On August 9, 1995, at the age of 53, he died of a heart attack.

Jerry Garcia was a musician from the United States who had a net worth of $15 million when he died.