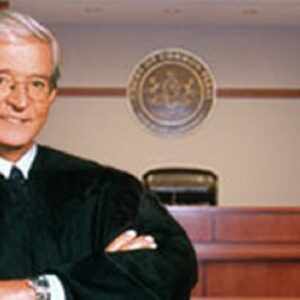 Gerald “Jerry” Sheindlin is an American judge, novelist, and television personality who rose to prominence through his appearances on “The People’s Court,” “Entertainment Tonight,” and “Biography.” As a brief judge on ‘The People’s Court,’ he soon earned a reputation for being compassionate, soft-spoken, yet direct and humorous. He served on the program for two years before stepping down and being replaced by Judge Marilyn Milian. During his stint on ‘The People’s Court,’ he was frequently referred to as Judge Judy’s spouse, as some feel his wife was more popular than he was. However, he exhibited amusement and ridiculed anger whenever litigants referred to him as “Judge Judy’s husband.” Before joining the show, Jerry served on the New York State Supreme Court, where he authored more than 64 published judgments, including a 46-page opinion on the admissibility of DNA forensic evidence in a murder prosecution. In addition, he is the author of ‘Genetic Fingerprinting: The Law and Science of DNA Evidence’ and ‘Blood Trail.’ During his 22 years as a partner at Adlerberg & Sheindlin, he represented defendants in criminal case trials.

Jerry Sheindlin, a licensed attorney, was a partner at Adlerberg & Sheindlin for 22 years as a defense attorney who primarily handled criminal cases. He served as a United States Administrative Law Judge for two years after being appointed to the position in 1980. Ed Koch, the then-Mayor of New York City and a former member of “The People’s Court,” appointed him a Criminal Court Judge in 1983.

In 1986, Judge Sheindlin was elevated to the New York State Supreme Court, a position he held until his retirement in 1999. During his judicial career, he authored over 64 published judicial opinions, several legal articles, and two books, including “Blood Trail” and “Genetic Fingerprinting.”

He joined the third season of ‘The People’s Court’ in September 1999 as the presiding judge, bringing 40 years of legal experience with him. It is an American reality court show based on arbitration and is the second-longest running courtroom series in history.

Jerry Sheindlin made more television appearances in 1981 on Entertainment Tonight, a syndicated entertainment newsmagazine that premiered in the same year. In 1987, he also starred in the documentary television series ‘Biography.’

Jerry Sheindlin was born in New York City on November 19, 1933. Born and raised in the Bronx, he enlisted in the Navy in 1951 during the Korean War, where his life was transformed. Due to his dismal high school grades, he was initially on probation at Long Island University.

In contrast, he thrived at the university, earned A’s, and completed his studies in two and a half years. In 1959, he also graduated from Brooklyn Law School with a Juris Doctor degree.

In 1977, he wed the writer and actress Judy, also known as “Judge Judy” for her court-themed television series. Both parties were married for the second time.

They divorced in 1990 and remarried the following year. Gregory, Jonathan, Nicole, Jamie, and Adam are his three biological children and two stepchildren. He has thirteen grandchildren. Gregory, Adam, and Nicole are attorneys and Jonathan A. Sheindlin is a retinal surgeon.