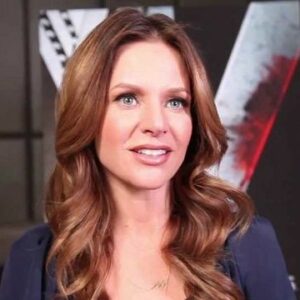 Hollywood veteran Jessalyn Gilsig is best known for her appearances in the TV series “Glee” and “Vikings.” She was born in Canada and has appeared in numerous TV shows and films, making her one of Hollywood’s most well-liked actors. She began her career as a voice actor and rose steadily through the ranks. Her well-known movies include, among others, “The Horse Whisperer,” “Prom Night,” and “The Stepfather.” Jessalyn’s major break came on the television show “The Practice.” However, she captured viewers’ attention when she portrayed “Lauren Davis” in the television series “Boston Public.” Nip/Tuck, Prison Break, Law & Order, Heroes, CSI:NY, The Good Wife, and Scandal are some of her other well-known TV programs. In 2016, she made her most recent appearance in “Scandal.”

Claire and Toby Gilsig welcomed Jessalyn into the world on November 30, 1971 in Montreal, Quebec, Canada.

Her father was an engineer, while her mother was a writer and translator.

She earned her English degree from McGill University in Montreal between 1989 and 1993. She also went to the esteemed “Harvard University”Institute “‘s of Advanced Theater Training.”
Jessalyn made several stage appearances while receiving her training at “Harvard,” including “Henry V,” “The Tempest,” and “The Cherry Orchard.”

Her acting career began in 1984 as a voice actress for the National Film Board of Canada’s short film “Masquerade.” When Jessalyn provided the movie with her voice, she was just 12 years old.
She participated in a number of plays before making her film debut in 1989 with “The Journey Home” and “Jacknife.” In 1991, Jessalyn made her television debut in the animated series “The Little Flying Bears.”

She provided her voice for the television show “Young Robin Hood” from 1991 to 1992. She appeared in 26 of the show’s episodes.

The 1992 television series “Gulliver’s Travels” also featured her voice. In the series, she provided the voice of “Folia.”

In 1999, she had two appearances on “The Practice.” Her debut in the 2000 television series “Snoops” did not, however, strike a chord with viewers.

Eventually, she got a big part in “Boston Public,” thanks to her relationship with the show’s producer, David E. Kelly. From 2000 until 2002, the program ran, turning Jessalyn into a well-known name.
She performed the part of “Lauren Davis,” which Kelley specifically created for her. She appears in 44 of the TV show’s episodes.

She first appeared in numerous other episodes, including “Haunted” (2002) and “Without a Trace” (2003), before making an appearance in the popular television program “Nip/Tuck.” She appeared in 17 episodes of the show as the nymphomaniac “Gina Russo” (2003–08).

Her most well-known performance was in the hit comedy series “Glee” on “FOX.” She portrayed Terri Schuester, the spouse of Will Schuester, the director of the glee club.
From 2009 through 2012 and again in 2015, “Glee” was shown.
The program was a huge success and elevated Jessalyn to stardom.

Jessalyn’s portrayal of “Siggy Haraldson” in the “History Channel” series “Vikings” is another one of her most enduring roles. She was a member of the show’s main cast.

The “Screen Actors Guild Award” for “Outstanding Performance by an Ensemble in a Comedy Series” for “Glee” was given to Jessalyn and the complete cast in 2010.
The Brooklyn Film Festival awarded her film “Somewhere Slow” the title of “Best Narrative Feature” in 2013.

She was nominated for “Best Actress in a TV Series” at the Golden Maple Awards in 2015 for her performance in “Vikings.”

On January 1st, 2005, Jessalyn wed her high school sweetheart, movie producer Robert Bobby Salomon. Robert had been her high school prom date when they had first started dating in 2002.
Penelope Salomon, her daughter, was born to her on September 26, 2006. Nevertheless, Jessalyn and Robert got separated in 2010 because of their fundamental disagreements.

Jessalyn enjoys painting. She created all the artwork for the “Boston Public” episode “The Station Agent” (2000).

Canadian actress Jessalyn Gilsig has a $3 million net worth. In November 1971, Jessalyn Gilsig was born in Montreal, Quebec, Canada. She began performing when she was 12 years old and attended Harvard University’s Institute for Advanced Theater Training as well as McGill University. She began her career as a voice actress and appeared in the 1984 film Mascarade. She gave the voice of Gertrude of Griswald for the TV show Young Robin Hood from 1991 to 1992. From 2000 to 2002, Gilsig played Lauren Davis in the television show Boston Public. She appeared frequently in the TV shows Heroes, Imaginary Bitches, Friday Night Lights, Prison Break, Nip/Tuck, CSI: NY, and NYPD Blue. Jessalyn played Terri Schuester in the television show Glee from 2009 to 2012. She played Siggy in the Vikings television series beginning in 2013. The Horse Whisperer, See This Movie, Flood, Prom Night, The Stepfather, About Fifty, and Somewhere Slow are among the films in which she has acted. Gilsig was nominated for a Daytime Emmy and a Teen Choice Award in addition to winning a Screen Actors Guild Award in 2010. Jessalyn and Bobby Salomon have a daughter together even though they are divorced.