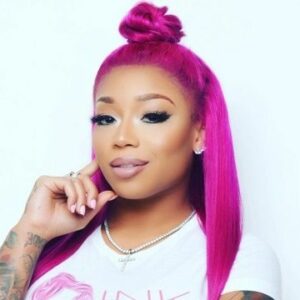 Afro-American rapper, singer, actor, dancer, and model named Jessica Dime. She became more well-known as “Dimepiece” after appearing on the TV reality series “Love & Hip Hop: Atlanta.” ‘Love & Hip Hop Atlanta: After Party Live!’, ‘K.Michelle: My Life’, and ‘Star’ were other projects in which she appeared. Other singles she has recorded include “Disrespectful,” “Hustle,” “Panda/Queenin,” “HeadCrack,” and “One Way.” Black Chyna and Dime have both performed as dancers at the “King of Diamonds Nightclub.” Despite having a stripper past, her appearance on the reality series “Love & Hip Hop: Atlanta” has helped advance her career and increased the show’s television viewership. She has additionally appeared in the music videos of other musicians. Dime appeared in the music videos for Rick Ross, Trina, and Waka Flocka Flame as well as Nicki Minaj’s “Beez in the Trap.” Under the business name “The Pinkpiece Collection,” she also recently debuted her first beauty and hair extension collection.

At the “King of Diamonds Nightclub” in Miami, dancer/stripper Jessica Dime began her professional career. She began earning more than US$10,000 a week at the same club that propelled Shenilla Bettencourt and Black Chyna to fame. She wanted to use her dancing abilities to pursue a career in hip-hop music, but it was merely a means to an end for her.

At the time, she only had one widely recognized release, “Jessica Dime alias Dimepiece – Nickel & Dime,” which was mostly the product of her own labor of love. Despite having a three-year contract, they parted ways because Dime thought Flo Rida was more focused on his own career. She briefly went back to stripping in 2014, though.

Jessica Dime’s first big break came in 2015 when she began making self-assigned guest appearances on the reality TV program “Love & Hip Hop Atlanta: After Party Live!” She gained notoriety after appearing in the episodes “After Party Lives! 403” and “After Party: Live! 411”.

She released the single “Disrespectful” in the same year, and her admirers seemed to like it. On April 20, 2015, Dime made her television debut in “Love & Hip Hop: Atlanta.” She quickly became a series regular thanks to her charisma and on-screen presence, and in 2017 she is still a returning character.

She has also appeared in the episodes “Piper Takes the Pole” and “London Calling” of the 2016 television series “K.Michelle: My Life” as herself. Jessica participated in the 2017 season of the television competition “Hip Hop Squares” and made an appearance in the episode “The Devil You Know” of the show “Star” (2017).

The teenage rapper actress has been making waves in the entertainment sector despite her early difficulties. She put a lot of effort into her musical career in 2017, releasing the tracks “Hustle” and “100SHOTS.” Over 1 million people have viewed her music video for the tune “Panda/Queenin” on YouTube.

She is the proprietor of the line of hair extension items known as “The Pink piece Collection.” According to her, the collection’s products are designed to eliminate the need to harm natural hair when experimenting with other hues.

After Jessica alleged that her ‘Love & Hip-Hop: Atlanta’ co-star Dawn Heflin was bankrupt, they got into a fight and a social media argument in September 2016. Their disagreements have not been able to be settled. The actress was stunned when her ex-boyfriend, Memphis rapper Lody Lucci, resentful that she had started dating someone else, published a sex tape of them together in December 2016.

On January 27, 1986, Jessica Chatman was born in Memphis, Tennessee, in the United States. She was inspired to write her own lyrics by the fact that her mother was an English teacher. She attended “LeMoyne-Owen College” after completing her studies at “The University of Memphis.”

When she dropped out of school to become a dancer, she was majoring in business administration. She has dated rapper Lody Lucci in the past but keeps her love life very private. She announced her engagement to NBA star Shawnee Williams on April 6, 2017.

An American rapper named Jessica Dime has a $400 000 net worth. She has released a number of CDs over the course of her musical career, but she is best recognized for her appearances on the popular VH1 reality series Love & Hip Hop: Atlanta. Dimepiece, as her fans call her, adds an intriguing variation to the Love & Hip Hop cast with her full head of pink hair and no-nonsense demeanor.